When my husband and I had our son, we knew we wanted him to see the world and its differences with as much love and as little prejudice as possible. We wanted him to know that people are both different and similar and that it made the world more interesting and beautiful.

I loved hearing my son's descriptions because they were the words he came up with. If he wanted to point someone out on the playground, he might say "the dark-skinned boy" or "the girl with the long yellow hair" or "the boy who's bigger than the other kids." It was however he saw them. People's descriptions didn't equal their identity; it was just a part of them. Equality was a given. Differences didn't affect that.

But the world is way more complex than life on the playground. Just because we believe that differences shouldn't affect equality doesn't make it a reality. It doesn't exist just because we want it to.

I am grateful that my son sees and does a decent job understanding gender inequality. He gets that both women and men are better off when treated equally. Both of his parents are strong and vocal on the subject, and he's seen this kind of inequality first hand. He gets that "we're not done yet" when it comes to pay equity and power. He gets that men are strong when they show emotion. I love that he has already stood up and challenged the patriarchal world.

And now...it is time to better tackle the truth that racial equality is far from a reality. Far. And that hoping for it without working toward it doesn't make it happen. And that we all must be accountable and work for a solution. 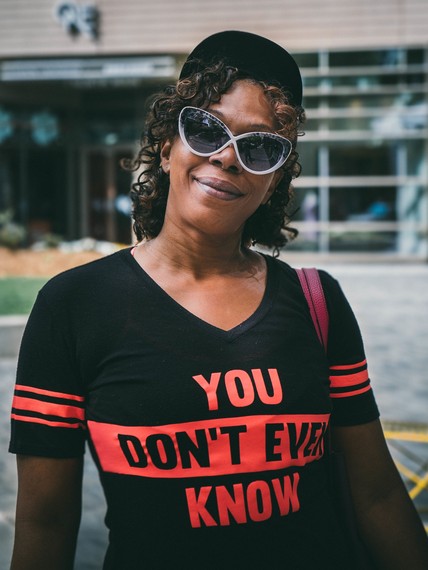 Recently, my son and I were talking about how working hard factors into achieving one's potential. I spoke of how God can bless you with innate talent, but if you coast and don't work to get even better, then you're not reaching your potential. And everyone has great potential.

But in that moment, I recognized that if I didn't clarify something, then I was being too simplistic and unrealistic. So I told him that I wanted him to understand that potential in a privileged world is much different than potential in a world without the same privileges. I wanted him to understand that he is privileged. We talked about some of the things that might make up privilege -- whether or not quality schools are in your neighborhood, or whether or not your parents are working two or three jobs to keep things going and are therefore not exactly able to be around and check on homework, or whether or not you can feel safe when you step outside. These are not everyone's reality, and they do affect one's potential. So we can't just look at the world and simplistically say, "Well, if you work hard enough, you can be anything you want" because it's not that uncomplicated for everyone.

I think my son understands this, in essence, but I now realize there needs to be more to the conversation. You see, when I've discussed privilege with him before, I haven't spoken directly to it being a color issue. For one, I see privilege also as a class issue -- but mainly because I never wanted to foster preconceptions about people of color.

But there is a fine line between that and not talking about the elephant in the room.

America can't pretend that it is devoid of racism. We can't watch the events of the last several days and not admit that there is a deep, systemic problem that we must seek to fix.

As a mom, I am wary of having my son see the disturbing images of a police officer shooting a man he already has pinned to the ground... yet I know he needs to know that this is a very real problem. I need to teach him that while the overwhelming majority of police officers are not doing such things and do not see "to serve and protect" as color sensitive, there are some who do--and we need to work to end that. That saying that black lives matter doesn't imply that any other lives don't. What happened in Baton Rouge and Falcon Heights and Dallas isn't okay.

As a mom, all I have to do to better feel the issue is envision my son as a young African American. What must it be like as a mom to live in fear and worry that he might end up a horrific viral video? That if he chooses to wear a hoodie, he is putting himself at risk of being judged a criminal? That if he is driving a nice car in a white neighborhood, he may get pulled over for no reason? That losing my son to violence is a very real threat?

Given my reality, I can only imagine... but my heart hurts terribly, and I know that we must not ignore these truths.

We can believe that all people are "created equal," but that doesn't mean that all are treated equally in our society. My son knows that there is racism in the world, but we need to discuss how we are a long way off from being the "post racial" society that some claim we are. I need to make sure that not fostering preconceptions doesn't mean not addressing the very real struggles that exist in this world.

There is not a level playing field when it comes to race in the United States. There is no getting around it. And in order for any real change to be achieved, we've got to say it out loud and work together. Together it is possible. Divided... it will only be more and more of the unacceptable same.

This post was originally published on The Juggle Struggle.