One horse arrived at the sanctuary with a fractured skull after being beaten with a two-by-four and dragged behind a truck. Another arrived with untreated third degree burns from a stable fire. And another rescue was apparently shot by drug smugglers and left to die in the desert with a 300-pound pack on his back.

Awful stories, true. But Pomroy can also testify to the incredible resilience of these four-legged survivors, who rush to the fences to greet visitors like happy, curious children.

"Equine Voices has rescued hundreds of horses in the last ten years," she said. "And I am always amazed at how little they require to be healthy and happy. Horses are incredible sentient beings, and the gratitude they show when they know they have been saved is amazing. A little bit of love, good food and care is all it takes."

They get all of that and more at Equine Voices, from a loyal staff and a cadre of dedicated, diligent volunteers who receive special training to make sure they handle each horse with expert care. In fact, Equine Voices offers workshops and training for potential adoptive families, school children and the public as well.

Running the sanctuary is a labor of love for Pomroy. But she's highly qualified, too.

"Before I started Equine Voices, I worked at a wild horse sanctuary in California," she explained. "This experience was the education I needed to start my own rescue. I learned everything from working with wild, untouchable horses to writing grants and creating unique programs."

That sanctuary also introduced her to the plight of the PMU mares, a cause that inspired her to open her own sanctuary on 10 acres just outside of Tucson, Arizona. PMU or "Premarin" mares are the suppliers of the female hormones sold as "Premarin." Their plight is poignantly presented on the Equine Voices web site:

They live each day in cramped stalls too small to even lie down, they are denied free access to water, standing for up to six months in a "pee-line" with rubber collection cups hooked tightly around their urethra. Once they have their foals, they are immediately impregnated and brought back to the "pee-line." The foals are sent to auction, ultimately to slaughter, since they are a "byproduct" of the industry. When the mares are too old to bear any more foals, they are then sent to auction, and like the foals, sent to the slaughterhouse.

Equine Voices began with four PMU foals. One, a gentle giant named Gulliver, is now the Equine Voices mascot. Considered "big and ugly" by his owners, he was saved from slaughter by Pomroy just before he was due to be hauled off to slaughter. The picture below shows how much he has grown since then. 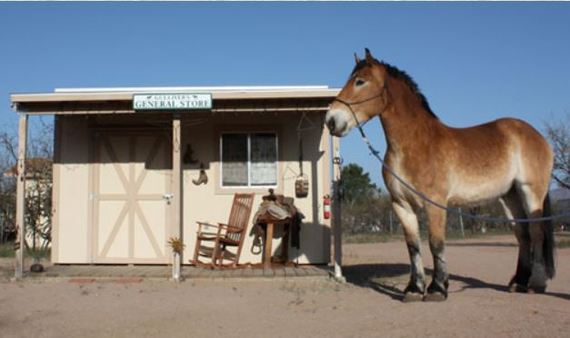 That's not Photoshop, folks. He's a very big boy whose fan club and products raise lots of funds for Equine Voices. He even has his own brand of locally produced wine, aptly named "Gulliver's Estates."

Equine Voices also rehabilitates horses forced into the drug trade, as the NBC Nightly News feature above explains. Many arrive with their backs rubbed raw after being abandoned still carrying the 300-pound burlap packs they haul across the border. Diamond Rio, the horse mentioned earlier in this article, was also permanently lamed by his captors for reasons no one will ever know.

Horses like Diamond Rio cannot be be adopted. So though most of the rescues eventually find loving owners, a few will remain with Equine Voices for the rest of their lives.

Keeping the current 70 residents fed and sheltered and taking in new rescues brought in by local law enforcement and animal welfare agencies has become more costly every year.

"With a bill of upwards of $35,000 a month, fundraising is a continuous effort," Pomroy explained. "The economy has left many horses in need of homes and financially it's difficult to keep up with the demand. Grants for programs like ours are limited and competitive. It's a constant effort to 'think outside the box' and find new ways of raising money."

Contributions are accepted on a special page on the Equine Voices site where visitors can also buy Equine Voices merchandise--and Gulliver's wine, too.

Those contributions save precious lives. And the magnificent creatures they care for each day enrich the lives of staff and volunteers alike in return.

"The reward for me, is to watch these gorgeous animals regain the twinkle in their eyes," Pomroy said. "I feel grateful to be part of their healing."