A troubled teenager, Alan Strang (Andrew Nowak), blinds three horses in a stable. A prosecutor, Hesther Salomon (Stephanie Schulz), plea-bargains treatment for jail time by calling in a favor with a child psychologist, Martin Dysart (Noah Wagner). At the end, both men undergo a catharsis. For the patient, presumably, it's a breakthrough. For the doctor, we're not so sure.

Structured like a detective story whose chiseled motives form pieces of a very disturbing puzzle, Peter Shaffer's "Equus," directed by Robert Craig for the Long Beach Playhouse's Studio Theatre, shows how the effort to document the causes of evil are, here at least, less compelling than the effects it elicits in those trying to understand and manage them. The therapy's the afterthought, albeit an interesting, well acted, directed, and staged one. The story's thrust consists of the fallibility of an imperfect human (Dysart) trying to understand the psyche of another imperfect human (Nowak) and, in so doing, gets wrapped up in his own Greek tragedy. Played out here in all their visceral glory, these imperfections make for stunningly good drama.

Production values are minimal. To tell the story so vividly on that shoebox stage is nothing short of miraculous. It condenses the drama, making it less physical, more emotional. The scenes blend and sometimes overlap into each other, giving them a sense of simultaneity which nicely mirrors what is going on in Alan's head and, most likely, in Dysart's head as well. Andrew Vonderschmitt's Horses (Jacqueline Case, Kevin J. Prince, and Tony Sabin Prince) are wonderfully conceived. Their sculpted heads present a mobile surreality that, in the moment of crisis, shock us like the shrieking, dismembered horses in Picasso's painting "Guernica."

Taut and focused, the ensemble effort was pitch perfect. Alan's parents, Dora (Margaret Schugt) and Frank (Tom Juarez), nicely set up the religious/secular dynamic that informed their son's apotheosis of the stable horses under his care. Lauren Leone Baker's Jill Mason almost too perfectly provides the Eve in Paradise catalyst for Alan's heinous deed. But the main drama revolves around the volcanic and enigmatic exchanges between Wagner and Nowak. Initially, Wagner conveys assurance, a little world-weariness, perhaps, but, at the very least, competence and confidence. But oh how he loses his aura of clinical invincibility when he shares his own troubled dreams (children, ritualistically massacred). Wagner's use of a clever placebo to commence Nowak's breakthrough is masterful but doing so gets to him, the way a conductor crumbles after a particularly grueling marathon performance of some symphonic blockbuster.

Nowak, for his part, looks and acts like the teenager he is. He's initially stubborn, his responses evasive. But, as with Wagner in the buildup to the breathtakingly climactic scene, he comes unhinged (the voice a disconnect from his innocent good looks). We don't just see the reasons for his deed; we experience them. We have to leave it to therapy to assume that he's going to get better. Whether the same can be said for Wagner is something else altogether. And, damn it, nothing can be done for those three horses. 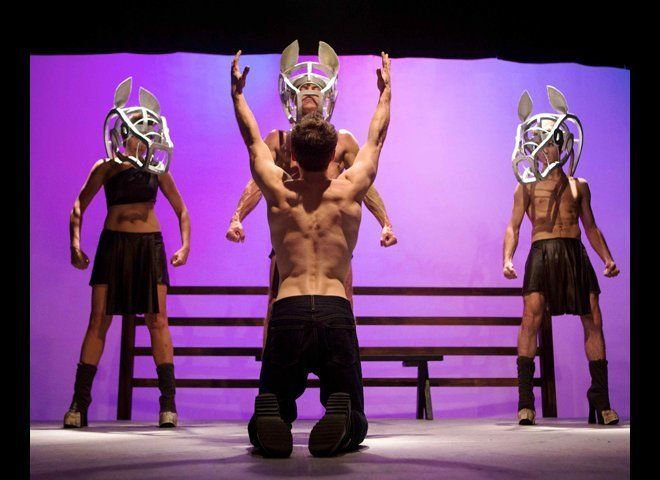