Fewer people are reading - but at least they're reading more, and in more formats than ever.

That is, according to the results of a series of telephone surveys carried out by the Pew Research Center's Internet & American Life Project, funded by the Bill & Melinda Gates Foundation, which were published yesterday.

The report showed that as of February 2012, 21% of Americans had read an e-book, and that owners of e-readers read an average of eight books a year more than people without the devices (24 vs 16).

The surveys of 2,986 respondents, carried out in English and Spanish at the end of 2011 and the beginning of 2012, also showed that the average (calculated by mean) American reads 17 books a year.

However, 19% of respondents aged 16 and over said that they hadn't read a single book in any format, over the previous 12 months - the highest since such surveys on American reading habits began in 1978. If this figure is accurate, that means more than 50 million Americans don't read books at all.

Technology ownership had shifted significantly since previous surveys. In November 2010, 6% of Americans reported owning an e-reader; the figure is now 19%, with females aged 30-49 years old the most represented group. Amazon's Kindle is by far the most popular device, owned by 62% of e-book readers; Barnes and Noble's Nook has 22% of the market. When tablets are also factored in, the survey suggests that 28% of Americans aged 18 or older own a portable device that can be used as an e-book reader, not counting cell phones or computers.

However, it remains to be seen how much more the e-reader market can grow, without a major shift in attitude: 85% of respondents who don't currently own such a device said they had no interest in ever owning an e-reader. Santa Claus, take note.

Perhaps most interestingly, e-book readers are still voracious consumers of print books too; 58% of e-book owners said that they were reading a print book the previous day.

And 5% of respondents reported reading 50 or more books over the past year. That's down from 13% in 1978, but still: who are these people and how do they find the time?

See the graph below for why respondents prefer one medium over another. How many books do you think you read last year? 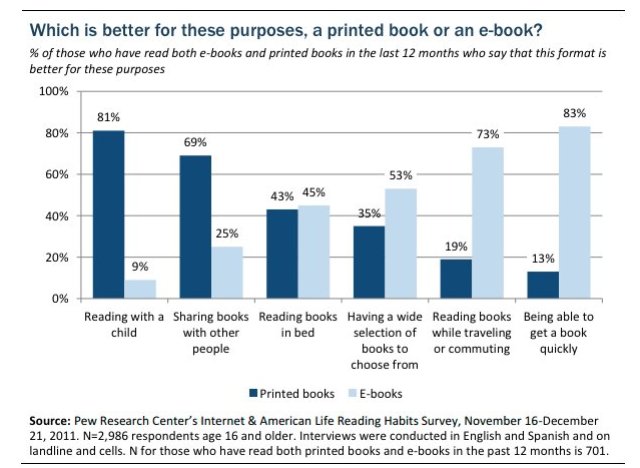 Correction: We inadvertently misspelled "Santa Claus" in a previous version of this article. No presents for us this year.