Erebus is a Pontiac, Mich. terror venue that's been churning out high-decibel screams for over a decade, and it's set a high bar for Halloween entertainment. The establishment broke the Guinness record for largest walk-through haunted attraction in 2005, a title it held onto until 2009.

The haunt is the deranged brainchild of two brothers, Edward and Jim Terebus. Building upon their prior experience in the field, they opened Erebus in 2000. The attraction is built on the premise that a mad scientist is using the space to conduct bizarre, unethical experiments on anyone gullible enough to enter.

The Huffington Post spoke with Edward Terebus to find out more about Erebus' horrifying secrets, the crew responsible for its gruesome work and, of course, the enigma that is the terrible Dr. Colbert.

To start with, tell us about Erebus' world record.

We took that record away from a haunted house in Japan. We held it for five seasons. It's actually not how big the haunt is, but how far you're walking through it. Our record was for 2,189 linear feet. We're up to over 2,600 feet now, which is over a half-mile walk inside the building.

Southeast Michigan is the haunted house capital of the world. Within a 50-mile radius we actually have more haunts here than anywhere else in the whole world. There's probably anywhere from 70 to 100 different haunts.

If [we] go to a Halloween trade show and [we] see something really cool, we can't buy it because 25 or 30 other guys will have that in this market. And then we'll all be looking the same. We don't buy all that stuff at the trade show. We build 95 percent of everything ourselves here. I've got things that will grab, bite you, land on top of you. I'm going to put you in a room. Slam the door. Drop 10,000 balls on your head. Fill that room up. How long can you hold your breath?

Tell me about your early haunted house experience.

We started in the haunted house business in 1981. My brother was laid off from Ford. He decided to build a haunted house, and he actually had a little bit of experience from a different company. He was 28 at the time I was 18. I was graduating high school.

We built our first haunted house. It was 1,200 square feet, and we charged $1.50 to come on in. I think we lost $500. Big learning lesson. It was a pre-fab building. We built it on the low part of the parking lot. So when it rained, customers [were] walking through four inches of water. It was a nightmare!

What is Erebus' backstory?

The backstory or the theme of the whole place is Dr. Colbert actually built a time machine for the government. He broke away. Did it in secret in this building downtown Pontiac. And every time he put someone in his time machine, the time period looked at them as a virus and wiped them out. Obsessed with trying to make this thing work, he sent more and more of his people into the machine. Eventually he ran out of personnel and ran out of financing. But then [he] had a brilliant idea: disguise the time machine as a haunted house. Now he had an endless supply of human guinea pigs willing to go in, but also to help finance the program.

During the season we have a pool of about 250 employees. Each night there's over 100 people working here. We have about 90 actors. After the season it goes down to seven guys here that work full-time all year round -- getting ready for next year. We have a major construction guy. We have an art guy. We have a guy who was in the army. He used to work with Black Hawk helicopters. He's the guy who fixes everything. So we have a great crew. My brothers an engineer. I'm an artist. We come up with things that nobody has done before.

What are some of Erebus' scarier attractions?

One of the things we've created is the mutant gorilla. We call it animatronic puppetry. It's actually an animatronic prop, but it's controlled by us. It's actor-driven, so the actor brings it to life. The actor can make it follow you and move towards you. It's a little thing that's probably three-and-a-half feet tall. It has three-foot arms. It'll come out and grab your leg. This year we have five of those things inside the haunted house.

The swamp is one of the signature hauntings that we invented here. As you're walking down this ramp, you get deeper and deeper into the bowels of Erebus. It starts out at your ankles you can see the green swirls of the water as you're getting deeper and deeper. It starts at your ankle and works up to your waist high. You literally have to tread your way through here. As you're pushing your way through that energy you're dispelling is actually working against the guy behind you. You can feel the muck of the ground -- sucking up on your shoes. And then, obviously, you have the creatures that attack you. It's kind of a whole interactive thing. We're trying to get all senses involved here.

How freaked out do people get? Do they ever faint or go to the hospital?

On average over 500 people a year chicken out. Last year we had 73 people confirmed wet themselves. I'm talking a full wet. I had a girl the other night: "Oh I peed myself." She wanted to get on the board. We [shined] her with a flashlight. There's no wet spot there. I mean a little squirt doesn't count. You've got to pee yourself. Then we've had people really kind of freak out take off running down hallways. You take off running down a dark hallway, you know, you're going to bounce into a wall. These people knock themselves unconscious.

Anything special people should know about this year's Erebus?
Erebus is the the darkness at the edge of the earth that the dead must pass to reach Hades. In Greek mythology, it's the son of chaos and brother of night. So we've got chaos this year. Chaos is the mother. We've got the big mama here, and she's coming in from every angle.

To find out more about Erebus, scroll through our photo slideshow below or visit www.hauntedpontiac.com.

PHOTO GALLERY
Scenes Of Terror From The Erebus Haunted Attraction
Download
Calling all HuffPost superfans!
Sign up for membership to become a founding member and help shape HuffPost's next chapter
Join HuffPost 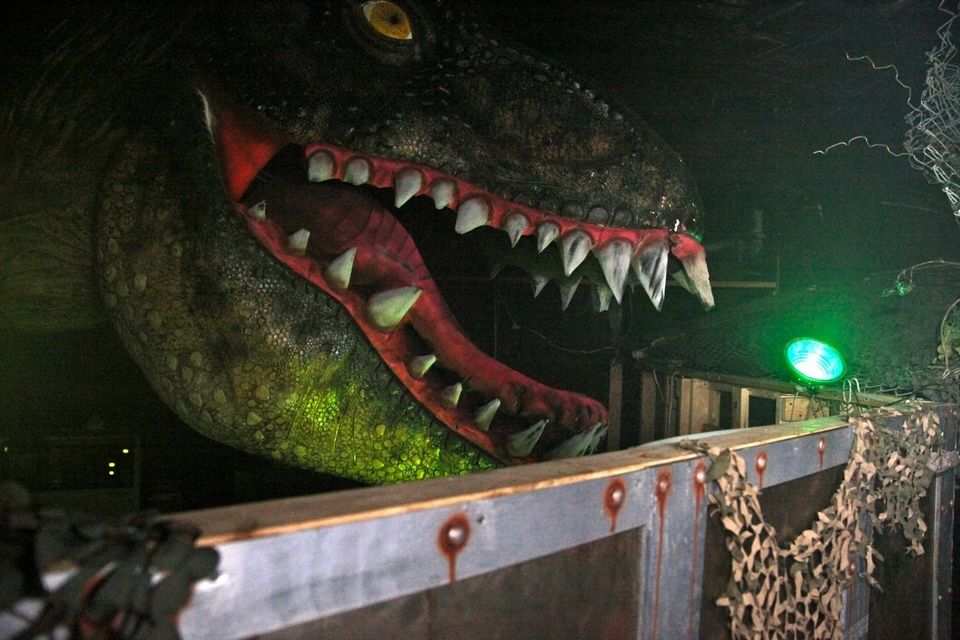 1 / 27
Tyrannosaurus Terror
This carnivorous dinosaur is just one of the many horrifying surprises waiting for visitors at Erebus, a haunted attraction located in Pontiac, Mich.
Erebus