Eric Alva, a gay Marine veteran who lost a leg during combat in the Iraq War, faced an unfriendly reception from anti-LGBT protesters in San Antonio, Texas, this week, while testifying in favor of an anti-discrimination ordinance.

In a Facebook post after addressing the city council on Wednesday, Alva described the response he received from a large group rallying against a measure that would expand anti-discrimination protections to include sexual orientation, gender identity and veteran status.

“Well I just left city council chambers and I feel like crying," he wrote. "I have never seen a city so divided and hateful towards each other. All of mankind should be ashamed. I already spoke and even some of the religious groups even booed me as I spoke. Such disrespect as they preach the word of God."

Alva followed up with this photo: 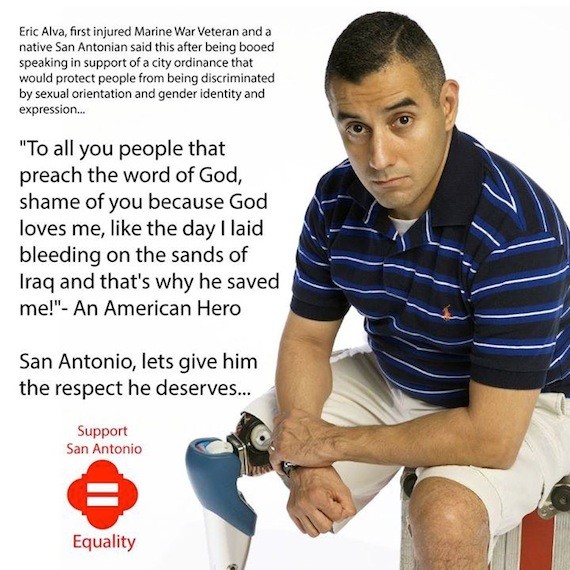 The San Antonio Express-News reported that around 300 anti-LGBT activists, led by local religious leaders, gathered outside city hall before streaming in to watch the debate.

"We need our prayers to touch our council members," Pastor Charles Flowers said, according to the Express-News. "Let them vote 'no' to this ordinance, and 'yes' to the reign of the kingdom of God."

Members of the city council are expected to meet again on Aug. 28 to further consider the anti-discrimination measure. They'll hold a final vote on the additions on Sept. 5.

The ordinance has already sparked controversy in San Antonio. On Thursday, a recording of Councilwoman Elisa Chan (R) surfaced, in which the lawmaker and her staff are heard bashing the proposal and the LGBT community in a series of homophobic remarks.