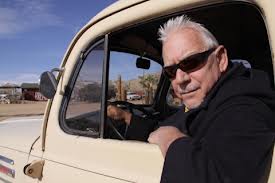 Eric Burdon figures he got a rude awakening from life pretty early -- the day he was born. It was May 11, 1941, in Newcastle upon Tyne. England was at war with Germany.

"The hospital I was born in was hit by high-intensity bombs from the Luftwaffe, flying off from occupied Finland," he recalls, in a phone interview from his home in Joshua Tree, California. "So knock, knock. Wake up, Eric! Welcome to the world."

One could argue that Burdon, who is now touring behind his recent bluesy, soulful and lyrically topical album 'Til Your River Runs Dry, has had a certain adversarial relationship with life ever since. His first band had the impolite, confrontational name of the Animals. Initially part of the great British Invasion of America in 1964, their biggest hits were about living amid poverty and degradation in New Orleans ("The House of the Rising Sun," an adaptation of a folk ballad) and the fear of getting old and gray in a dirty industrial town (Barry Mann and Cynthia Weil's "We Gotta Get Out of This Place").

And when the 1960s ended and Burdon tired of fronting the Animals (which had undergone personnel changes), his next band had a name that couldn't have been more antithetical to the peace-love vibe of the era's youth culture: War. Their first album was even called Eric Burdon Declares "War."

Burdon has had an extended career of performing and touring ever since, although never again topping the charts as he did in the 1960s with his powerfully gritty voice, by turns snarling and purring. That career's longevity has been a war against adversity, too. A war where his music was his weapon.

"I've done almost 40 years of stage performance under the worst circumstances," he says. "I'm running around out there like a little athlete singing my ass off. I've done that with an asthmatic condition. That tells you something about the power of music.

"Basically, what happens is the adrenaline from the audience gets into your system and kicks you to a point where it's a supernormal thing," he explains. "I can't even run from one side of the street to the other in real life. But when I get on stage, something happens because it comes from the audience."

Burdon has spent time thinking about all he's been through while recovering from recent -- and, he says, successful -- back surgery. "I had two to three years of absolute pain and agony before anybody could diagnose what it was," he says. "And then when they did it, the actual time in the hospital was very short and extremely painless. But recuperation time is the thing now. I was talking to my sister about it and she said, 'Just pretend you're a woman and pregnant because that's how long it's going to take.' And I thought, 'Yeah, she's got a point there.'"

Some of what Burdon has gone through will probably be in Breathless, his new book scheduled for publication this year. It's his third memoir -- the first since 2001. In the meantime, however, he's got a carefully crafted new record to promote and gigs to play at international concerts and festivals.

'Til Your River Runs Dry is a contemporary roots-rock album with contemporary concerns and no Animals nostalgia -- which is the way Burdon wants it, as he's had some legal difficulties about who can use the Animals name when touring. "It's all business -- and business ain't nothin' but the blues," he says.

His current record label, ABKCO Music, is fine with him not recording using "The Animals" as part of any band name -- and it owns the band's back catalogue. Burdon co-produced 'Til Your Well Runs Dry, had a hand in writing all but two of the 12 songs, and has faithful, solid supporting musicians to provide a consistently excellent and never monochromatic sound.

War, by the way, is present on the new album. Not the group, but the terrible real thing. It's the subject of the song "Memorial Day," with lyrics like: "On Memorial Day/Be Strong, let peace be the way/Break the cycle of hate and lies/Let the truth be realized/Memorial day... memorial day."

Burdon worried the song might be interpreted as denigrating Memorial Day and the tradition of paying respect to war dead. "It's a touchy subject," he acknowledges. "I really asked myself if I am doing the right thing here. I'm following my beliefs that we should learn how to diminish war so there is no need for Memorial Day.

"I'm not saying one shouldn't remember any friend that in the world passed on and no longer is here. Of course, you should. And I'm not trying to diminish what happens to young men in combat, for whatever reason they're there, if they're warriors in the thick of it.

"But I made the decision to do it because I think it's an interesting vision," he says of the song. "Every year, we have a remembrance of people who are dead, but we don't seem to make the move to do anything about the body count, to make it smaller by not going to war."

"I said war is an addiction/And the junkies don't want to stop/They're making tons of money/With every drip of blood that drops."

"War is an addiction -- of course it is," Burdon says. "It's there; it's not going away. But if it's just constant war from one generation to another, something's wrong somewhere. Somebody has to be able to put the brakes on. Everything we need in life is here. Why should we attack somebody else? I don't get it.

"OK, so we got attacked by some demons from the sky and lost thousands of lives," he says. "But to react from vengeance and have massive troops going into maybe the right country, we're not sure -- maybe Iraq, maybe Iran, we're sure it's Afghanistan -- seems to me a crazy way to react.

"Especially after the Russians' time there (in Afghanistan), and the memory of the British time there. Nobody has ever climbed up that Hindu Kush (mountain range that includes parts of Afghanistan) and put it down for good. And why should we try? What's there? More rocks? More sand? We've got plenty in the desert here." (Joshua Tree is in an arid desert climate.)

The album's "River Is Rising" has a mournfully jazzy/spiritual groove, courtesy of Jon Cleary's piano and guitar and some poignant tuba, trombone and trumpet work along with hymn-like backing vocals. It was recorded at Cleary's Funk Headquarters studio in New Orleans. (Most of the album was recorded at Ultratone Studio in L.A.'s Studio City.)

"Actually it's his wife's sewing shop," Burdon explains. "We were all crowded with clothes hanging from the ceiling and Mardi Gras masks and everything. It was so New Orleans. He was great musician and did the charts and rehearsed a band comprised of part of Fats Domino's guys. We recorded it one time and I said, 'I think that's it.' Time for me to sit down now and think about what lyrically I can put into the backdrop."

'Til Your River Runs Dry also pays respects to Bo Diddley. Burdon covers his "Before You Accuse Me" and also has written "Bo Diddley Special," about attending the funeral for the iconic Rock and Roll Elder in 2008. Burdon's love for Diddley is long established -- the Animals kicked off their first album in 1964 with "The Story of Bo Diddley," Burdon's history of Diddley's impact on rock set to the famous Bo Diddley Beat.

But he had never actually met him, although he was once allowed to sit to the side of the stage, just 10 feet away, while Diddley and band performed in Australia. "The fact that I never had met him just added to the mystery of it," Burdon says. "When his funeral service was taking place in Clearwater (Fla.), I got an invitation from the family to go down there.

"It was a great opportunity for me to get a spiritual uplift," he continues. "I walked out of the church with my missus and we were wondering how we were going to get back to the hotel because the family was going off to a private thing. And we saw a city bus coming down the road and written on its destination was 'Bo Diddley Special.' And I went, 'That has to be a song!'"