DAVOS, Switzerland -- Fresh from Washington, where he played a leading role in preventing the extension of emergency unemployment benefits for Americans mired in joblessness, House Majority Leader Eric Cantor appeared to be enjoying one of the perks of his own employment: a sumptuous breakfast in this ski resort in the Swiss Alps, where he was attending the World Economic Forum.

On Friday morning, Cantor occupied a table in the back of the Kongress Hotel restaurant, the snow-covered mountains behind him, as he jovially discussed with his communications director Rory Cooper plans to give the Obama administration fresh grief for its seemingly nonexistent Syria policy.

Back in the states, Cantor and his Republican Party like to present themselves as old-school fiscal conservatives who eschew unnecessary expenditures in the interest of streamlining government and limiting the public debt. Republicans have long opposed extending unemployment benefits -- which can be the difference between basic sustenance and homelessness for people who depend upon them -- in part by arguing that spending needs to be limited.

So I approached Cantor's table and asked him who was paying for his trip. He took in a breath, grinned sheepishly and said, "I paid for this," gesturing at a table bearing the remnants of a buffet breakfast whose offerings included smoked salmon, croissants, freshly squeezed orange juice, assorted Swiss cheeses and mineral water. 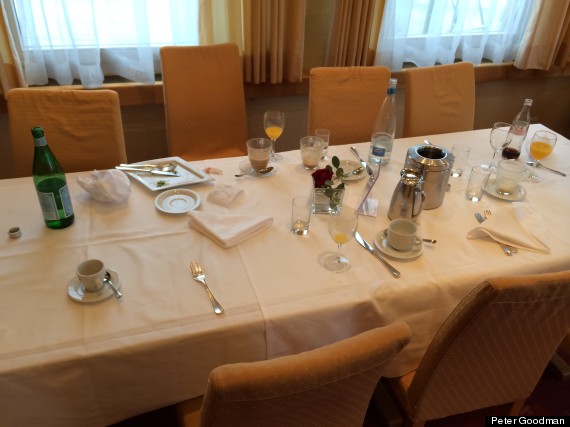 Cantor's table had ordered a bottle of San Pellegrino water, plus a Coca Cola and a cappuccino, all of this running 94.70 Swiss francs, around $105 -- a bit more than a third of the maximum $378 a week a jobless person can draw in benefits in Cantor's home state of Virginia. A receipt left on the table showed that the bill was paid for with an American Express card.

And who paid for the rest of his visit to Davos, a veritable Disneyland of ostentatious cocktail parties underwritten by global banks, technology companies and other well-heeled concerns?

Cantor took a glance sideways. "It's an official trip," he said, leaving it at that, and presumably confirming that taxpayers paid.

At which point, Cooper, now agitated, grabbed Cantor like an old person caught in a burning building and thrust him out of the restaurant, bumping me on the way out, though not before proffering a business card. "You can contact me to request an interview," Cooper said.

But what was the answer to the question I asked as Cantor sped past? Is it really appropriate to spend what is presumably taxpayer money on such a trip, when back at home the government supposedly cannot find a few hundred dollars a week for people trying to feed children and put gas in cars to get to job interviews?

I might as well have been asking the mountains. Cantor was gone.

A couple of weeks ago, Cantor took to the floor of the House to press the new Republican line on cutting unemployment benefits, one that seeks to sound better than heartless chintziness for struggling people: Now it's all about positive thinking.

"We have been trying to focus this Congress on getting back to a more optimistic view of what the economy can do," he said. "It is about jobs. It is about growth. Our focus is on employment, not unemployment."

Apparently, it worked. Thanks to the power of positive thinking, the economy delivered at least one American to rewarding work -- Eric Cantor, punching the clock in Davos, while taxpayers picked up the tab.