Authorities say accused cop killer Eric Matthew Frein may be playing a dangerous game of cat-and-mouse with the numerous law enforcement agents who are searching for him in northeastern Pennsylvania.

The suspicion was revealed during a Wednesday press conference, when Pennsylvania State Police Lt. Col. George Bivens acknowledged Frein has proven to be as elusive as he is brazen.

"I almost think that some of this is a game for him," Bivens said.

According to Bivens, Frein has been spotted several times by law enforcement officers who are attempting to capture him in the dense forests that surround Canadensis, the town where he grew up.

"He kept himself far enough away that he made it very unlikely that someone could get to him, but he made himself visible," Bivens said of the sightings, suggesting Frein is taunting police. 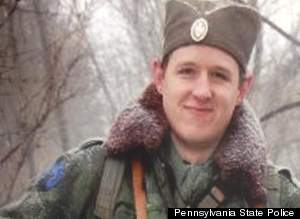 The manhunt for Frein, which Bivens said has involved upward of 1,000 members of law enforcement, began after the Sept. 12 shooting of Pennsylvania state troopers Alex Douglass and Bryon Dickson.

Authorities say Frien ambushed the troopers during a shift change outside the Blooming Grove barracks. Dickson was killed in the attack. Douglass, who was seriously wounded, remains hospitalized.

Bivens said Frein sightings have resulted in "pursuits of this individual," but the terrain where he is hiding has hindered those efforts, allowing him to slip away.

As of Wednesday afternoon, roughly 24 hours had passed since the last sighting of Frein, the lieutenant colonel said. Despite this, authorities remain convinced he is still in the area -- specifically within Price and Barrett Township.

In addition to Frein sightings, authorities said he has left a trail of used diapers and empty cigarette packs in the forests.

"Some of those items include Serbian cigarettes and soiled diapers that we have found in the area, among other things," Bivens said.

Frein, a marksman and self-taught survivalist, often played the part of a Serbian soldier during military re-enactments, police said.

"It's time to surrender... We're not going away," Bivens said in a direct appeal to Frein on Wednesday.

Follow HuffPost's Live Updates On Day 13 Of The Manhunt: