Eric Frein, the accused cop killer who was arraigned Friday morning after nearly two months on the run, is reportedly cooperating with police.

The announcement was made at a Friday morning press conference by Pennsylvania State Police Lt. Col. George Bivens.

"We have now started to find the answers the communities desire in this case," Bivens said. "He has spoken since his arrest."

However, the top cop declined to comment on any specific statements Frein has allegedly given, citing an "ongoing investigation."

Frein, a 31-year-old military enthusiast with extensive training as a marksman, is accused of ambushing two Pennsylvania state troopers during a shift change outside the Blooming Grove barracks on Sept. 12. Cpl. Bryon Dickson was killed in the attack. Trooper Alex Douglass, who was seriously wounded, was released from the hospital two weeks ago.

Until his capture, authorities spent 48 days searching for him in the forests surrounding Canadensis, the village in northeastern Pennsylvania where the suspect grew up.

Bivens estimates the cost of the manhunt to be in the neighborhood of $10 million.

Frein was caught Thursday evening, when U.S. marshals spotted him near an abandoned airport hangar at the Birchwood-Pocono Airport near Tannersville. The fugitive did not resist arrest, police said.

“[His arrest] was not a result of a tip or a sighting," Bivens said. "[It] was a result of the ongoing pressure put on Frein by law enforcement."

Authorities ultimately placed Frein in Dickson's handcuffs, before transporting him in the slain trooper's squad car to the Blooming Grove barracks.

There were numerous reported sightings of Frein over the course of the manhunt, and law enforcement repeatedly claimed they were closing in on the fugitive.

Asked by reporters about those sightings Friday, Bivens said authorities are "still trying to determine exactly where he was" and how many of those sightings were legitimate. 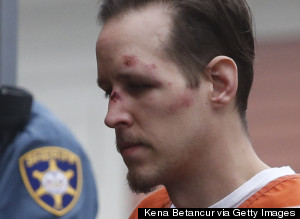 Bivens said injuries on Frein's face, which are visible in images taken of the suspect after his arrest, did not occur during his arrest. Those injuries, he said, happened while Frein was on the run.

Investigators previously said they uncovered computer evidence, in which Frein had written extensively about his hatred for police. They also alleged he had been planning an attack, possibly for several years.

"I've characterized his actions in the past as pure evil and I'm standing by that," Bivens said.