NEW YORK, July 25 (Reuters) - The widow of a man who died last week after being put in a choke hold by a New York City police officer urged federal prosecutors to launch a civil-rights investigation at a meeting in Brooklyn on Friday.

Eric Garner, 43, died last week after being tackled by police, who said he was resisting arrest, in front of a beauty parlor on Staten Island.

The city is investigating the incident, which was captured on video by two bystanders.

U.S. Attorney General Eric Holder, in a statement released on Friday following the meeting by Garner's widow, Esaw Garner, with two prosecutors from the U.S. attorney's office in Brooklyn, called the death a "tragic event."

"We are closely monitoring the city's investigation into the incident," Holder said. He did not comment on whether the Justice Department would mount its own investigation.

Thousands of people have watched the bystanders' videos that record Garner's dying cries that he could not breathe as police wrestled him to the ground while arresting him last Thursday for peddling untaxed cigarettes.

Nearly seven months after Mayor Bill de Blasio took office promising to reform the police, many New Yorkers have been alarmed to discover that some officers still use choke holds, although they have been officially banned from doing so for more than 20 years.

The city has promised to investigate a backlog of choke hold complaints, and the police have promised to overhaul their training program in response.

The Rev. Al Sharpton, the civil rights activist, who joined Garner's family at the meeting with federal prosecutors, said the city's promise was not enough.

"We cannot just depend -- and this is important -- on police policy to stop the choke hold," Sharpton told reporters outside the U.S. attorney's office in Brooklyn when he emerged with Esaw Garner after about 30 minutes. "We need a federal precedent."

Garner's death is already being investigated by at least four authorities: the Staten Island district attorney, the police department's internal affairs bureau, the city's inspector general of police and the city's Civilian Complaint Review Board.

Police said this week they were also investigating a second apparent use of a choke hold by an officer in the same week as Garner's death.

A crop of bystanders' videos, recorded just three days before Garner's death and circulated widely this week, showed an officer punching a suspected fare-dodger at a subway station and gripping him around the neck.

Ronald Johns, the suspected fare-dodger, is black, as was Garner, and the two incidents have tested de Blasio's pledge to mend frayed relations between the police and black and Latino residents. Police said Johns refused to show his identification and resisted arrest. (Additional reporting by Curtis Skinner; Editing by Jim Loney and Leslie Adler) 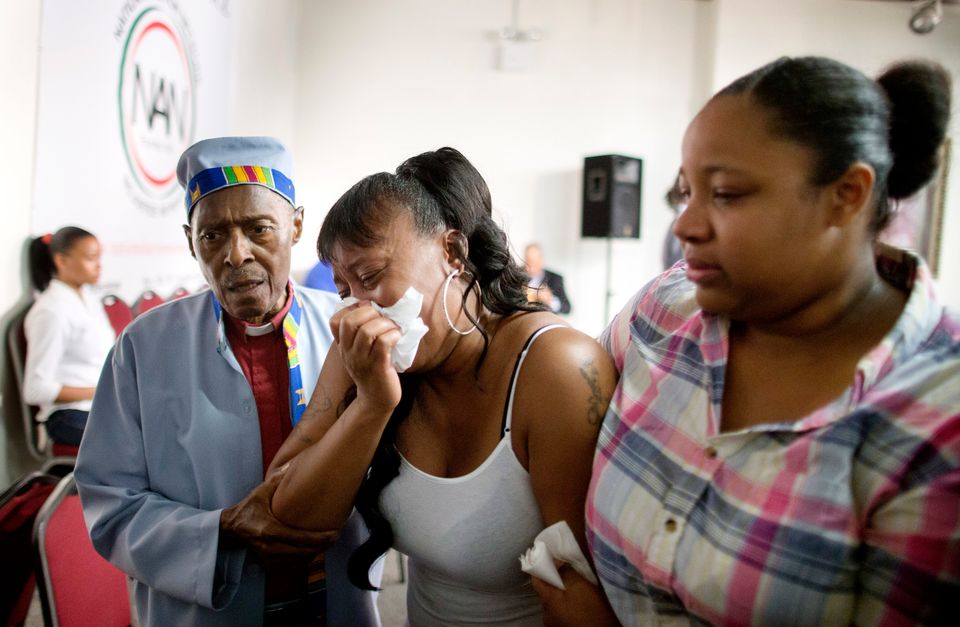 1 / 12
Arrest Struggle Death
Esaw Garner, wife of Eric Garner, is helped off the stage by Rev. Herbert Daughtry, center left, and her daughter Emerald Garner, right, after breaking down during a rally at the National Action Network headquarters for Eric Garner, Saturday, July 19, 2014, in New York. Garner, 43, died Thursday, during an arrest in Staten Island, when a plain-clothes police officer placed him in what appeared be a choke hold while several others brought him to the ground and struggled to place him in handcuffs. (AP Photo/John Minchillo)
ASSOCIATED PRESS