People all over the world are outraged about the failure to indict the police officers who killed Eric Garner and Michael Brown.

The proof is an animated map released by Twitter last week that shows the prevalence of tweets around the world using the hashtags #ICantBreathe, #BlackLivesMatter and #HandsUpDontShoot -- three prominent rallying cries of a growing movement to hold police accountable for violence against black Americans. Twitter limited the time period of the map below from Nov. 24 (the day of the Michael Brown decision) to Dec. 4 (the day after the Eric Garner decision). And as you can see, the tweets light up much of the globe.

Tweets with #BlackLivesMatter (shown in yellow below) first started to spread early on Nov. 24, just before a grand jury's decision not to indict then-police officer Darren Wilson in the Aug. 2014 shooting of Michael Brown in Ferguson, Missouri.

The trend exploded that evening after the Missouri prosecutor announced the grand jury's decision. 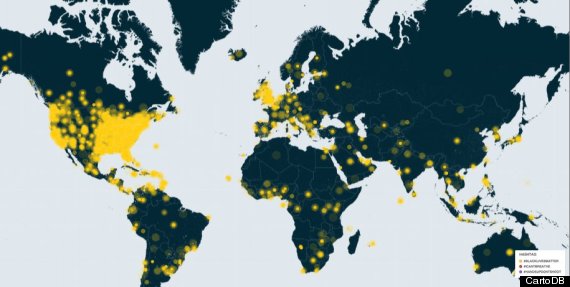 #HandsUpDontShoot (shown in purple below), which references Brown allegedly having his hands up during the shooting, began to appear on Dec. 1. 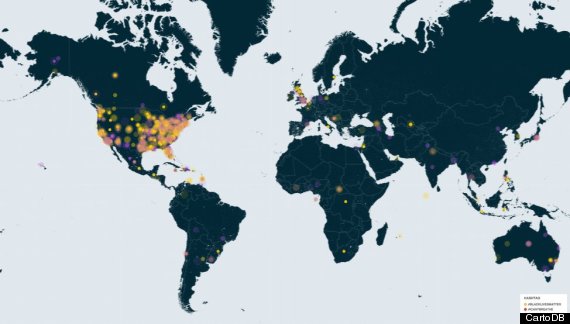 On Dec. 3, a Staten Island grand jury voted not to indict police officer Daniel Pantaleo in the death of Eric Garner. That's when we see the map fill with tweets of #BlackLivesMatter and #ICantBreathe (red) -- the last words Garner said as he died. The momentum continued into Dec. 4, as protests spread across the U.S.

Twitter published a map in August showing mentions of Ferguson and other key terms related to Michael Brown's death. These maps were featured in Twitter's biggest moments of 2014, released Wednesday.