NEW YORK -- A makeshift Staten Island memorial for Eric Garner -- the 43-year-old black man who died this summer after being put into a fatal chokehold by a white New York City police officer -- burned down Monday night from what the FDNY ruled an "accidental candle fire." The fire came after Garner’s family had spent the day attending events across the city honoring Martin Luther King Jr. Day.

Cynthia Davis, a spokeswoman for the family, told The Huffington Post Tuesday morning they believe the blaze to have been an accident.

“The police department explained to me what happened,” said Davis, who works at the National Action Network. She said officers offered to show her surveillance footage of the memorial, which they said showed the memorial suddenly start to smoke. A passersby then saw it burst into flames and called 911.

Earlier, in a series of tweets Monday night, Garner’s daughter Erica had said she suspected arson.

Just was therea couple of hours ago.cops drove pass my grandpa when he arrived to see the damege #anonymousopferguson pic.twitter.com/5ycP96t9QW

first my father gave now his memorial burning it reminds me of crosses being burnt infront of mlk hse!!#anonymousopfurguson #OpICantBreathe

But the FDNY told HuffPost that it received a call for a “debris/rubbish fire” on the sidewalk outside 204 Bay Street at 10:23 p.m., and that the flames were extinguished by 10:41 p.m. The department said it has ruled the fire an "accidental candle fire."

Davis said she, the Garner family, and the Rev. Al Sharpton had held a candlelight vigil at the memorial earlier Monday evening, but that people were carrying candles in their hands, and that there were no lit candles in the memorial itself.

It's unclear who lit the candle that eventually set the memorial aflame. 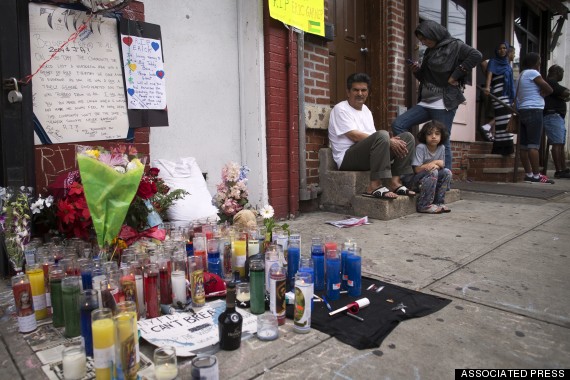 The memorial -- a collection of flowers, signs, photographs and votive candles -- sprung up over the summer on the patch of sidewalk where Garner was put into a chokehold on July 17 by NYPD officer Daniel Pantaleo during an arrest for selling untaxed cigarettes.

In a video of the arrest that eventually gained attention across the country and the world, Garner can be seen screaming “I can’t breathe” numerous times before his body goes limp.

Although a medical examiner later ruled his death a homicide, and although chokeholds are banned under NYPD guidelines, a Staten Island grand jury in December declined to indict Pantaleo, setting off massive protests across the city and country.

The family then joined Sharpton in laying a wreath at the spot in the Bedford-Stuyvesant neighborhood of Brooklyn where NYPD officers Wenjian Liu and Rafael Ramos were killed by a lone gunman last month. They also laid another wreath at the Pink Houses in East New York, Brooklyn, where Akai Gurley -- an unarmed 26-year-old black man -- was shot and killed in November by a NYPD officer. Gurley’s death is still under investigation.

After laying the wreaths, Sharpton and Garner’s family went to the vigil in Staten Island. 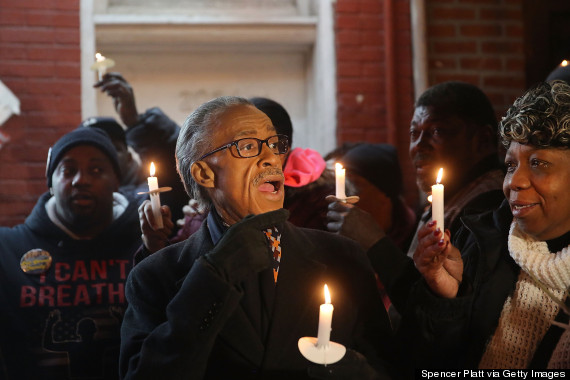 "We come tonight at the end of a long day ... because ultimately Dr. King gave his life for justice," Sharpton said at the vigil, according to The Staten Island Advance.

It was just hours later that the memorial honoring Garner burned down.

“Memorials can be rebuilt,” Davis told HuffPost Tuesday, “but the important thing is that the building didn’t catch fire and no one was hurt.”

The Garner family is planning more vigils and protests this month. A Staten Island judge will hold a hearing Jan. 29 about whether to release transcripts of the grand jury investigation into Garner’s death, but it is unknown when he will rule. Grand jury records are typically sealed, but four petitioners -- the New York Civil Liberties Union, the Legal Aid Society, Public Advocate Letitia James and The New York Post -- are set to argue that there’s a compelling public interest in the releasing the records.