This article originally appeared on artnet News. by Hili Perlson 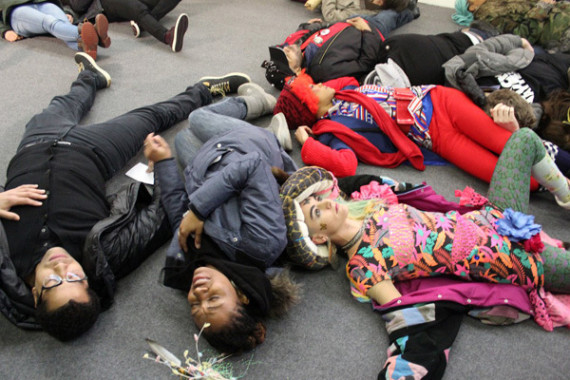 Members of Artists for Justice for NYC performed a die-in at the Armory Show on March 7. Photo: Victoria Valentine via CultureType.com

About a dozen participants began repeating Garner's last words, “I can't breathe," and subsequently fell to the ground at Pier 94—before being led out of the fair by security.

The unauthorized protest was initiated by members of the group Artists for Justice for NYC, which formed after a grand jury declined to indict Daniel Pantaleo, the police officer who used a choke hold—forbidden by police department regulations—on Eric Garner shortly before he died July 17, 2014.

“I was overwhelmed with emotion and a sense of obligation to get involved and take a stand," Shamirrah Hardin, one of the group's founders, wrote in an email to the New York Times.

Staged in New York's foremost art fair, the unsanctioned piece raises, once again, questions about whether art can tackle the challenges of our times (see After Ferguson, A New Protest Culture's Challenge to Art and Beloved Illustrator Blasted by Fans Over Ferguson Artwork).

A group member, Patrick Waldo, explained the choice of location as an attempt to reach an audience that probably sympathizes with the cause, but would not be typically involved in protests. “We're trying to get our message out to a crowd that is historically out of touch with the struggle of black America," he told the NYT.

A blurring of the lines between protest and spectacle seemed to be the group's approach to getting a crowd clad in their weekend's best to take part in political activism. 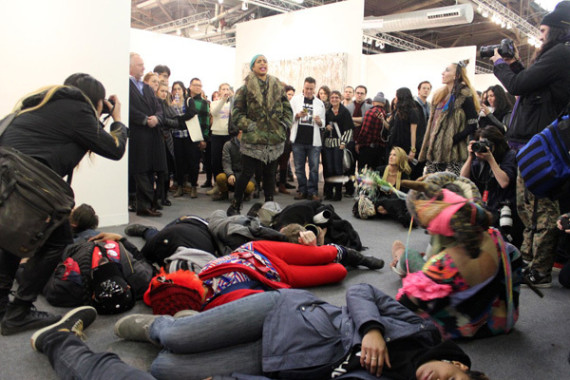 An audience of about 100 gathered around the die-in. Photo: Victoria Valentine via CultureType.com

An audience of several dozens encircled the performers lying motionless on the ground, and began snapping away.

One performer, Christian Felix, started shouting some of Garner's last words, taken from the video that captured the incident with the police, such as “I'm minding my business" and “I didn't do nothing."

The performance unraveled just inside the entrance in front of a lounge area with an installation by Hank Willis Thomas. The New York artist, who was recently endorsed by Beyoncé (see Beyoncé Boosts Artist Hank Willis Thomas for Black History Month), designed an installation that draws on an elusive play of words and ultimately spells out “Art imitates life imitates ads."

While audience participation remained tame, as is often the case with public “artivism," another boundary was blurred, namely, between art and real life: an emergency medical staff soon waded through the crowd apparently to provide first aid to the performers crying they were unable to breathe, the NYT reports.

The affair lasted no longer than 10 minutes, and was broken off by security guards who ushered the performers out. As soon as the guerrilla group was off the premise, the art fair went back to business as usual.

Noah Horowitz, the executive director of the Armory Show, explained the fair's official reaction in an email to the NYT: “As a matter of policy and due to a combination of both curatorial and safety concerns, any performance or action that has not been pre-approved has to be asked to leave. This is precisely what happened at the fair this afternoon."