On Friday, the day after Jindal compared Holder to segregationist Alabama Gov. George Wallace at the Conservative Political Action Conference, DOJ employees mailed Jindal a copy of a book by civil rights leader Rep. John Lewis (D-Ga.). They inserted a yellow sticky note on page 199, where Lewis writes about Vivian Malone, one of the first African-Americans to integrate the University of Alabama, who walked past Gov. Wallace that day.

Malone is Holder's late sister-in-law, a fact that Holder has mentioned in countless speeches throughout his five years as attorney general, including as recently as Wednesday.

"Worth a read," the note to Jindal says. 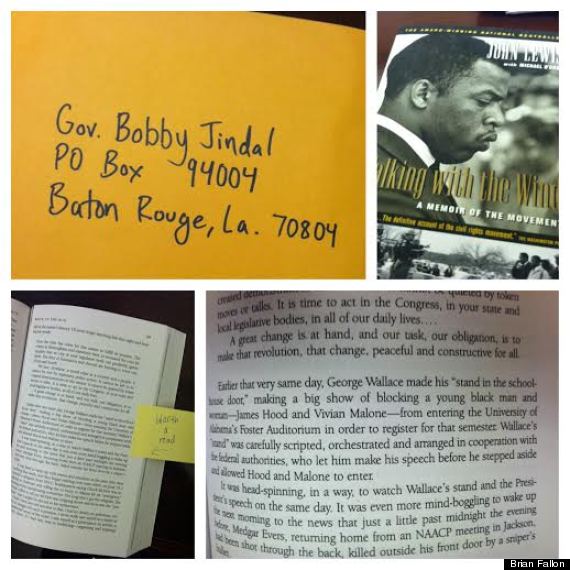 "This should help the governor brush up on his history the next time he invokes the Civil Rights Movement," Kevin Lewis, a DOJ spokesman, told The Huffington Post.

In his speech, Jindal said that Holder and DOJ were "trying to stand in the schoolhouse door to prevent minority kids, low-income kids, kids who haven’t had access to a great education, the chance to go to better schools." He was speaking about the Justice Department's Civil Rights Division's legal dispute with Jindal over Louisiana's school voucher program, which DOJ believed may have violated decades-old school desegregation orders.