In the wake of the explosive revelations about alleged sexual harassment and assault perpetrated by Hollywood producer Harvey Weinstein and other powerful men, former United States Attorney General Eric Holder called on men to take responsibility for creating a culture that allowed such abuse to occur ― and act to change.

During a speaking event Friday co-hosted by the Raben Group and the San Francisco Foundation, Holder was asked to respond to the spate of recent details that have emerged about sexual harassment in corporate America, including at companies like Uber.

In some cases, sexual harassment or assault violates the law, in which case law enforcement can help address the problem, Holder said.

“There are laws on the books that say a lot of the stuff that we have seen and that has been reported about simply violate the law, so the government needs to be involved there,” he said.

But law enforcement alone will not suffice, he added.

“There’s also a cultural thing that we need to deal with,” Holder said. “The Harvey Weinstein thing is something that is not unique to Harvey Weinstein. It’s not like he’s the only guy who ever did it and he only did it in the last three, four, five years. And it’s not only in that industry.”

Holder expressed hope that educating men to change their behavior could be a “silver lining” to emerge from the Weinstein scandal and other cases.

“This is a man’s problem. It’s not like you need to talk to women about this. They get it. You gotta talk to guys and make them understand you can’t be a pig,” he concluded, drawing applause.

Holder was the nation’s first black attorney general, serving from 2009 to 2015. He subsequently returned to practicing law at Covington, a major law firm where he worked before serving in the Barack Obama administration.

Holder chairs the National Democratic Redistricting Committee, a group created to reform congressional redistricting. Obama has been active in the organization.

Democrats believe their loss of state governments in 2010, the year of the most recent national census, which is used for redistricting, prompted a massive wave of gerrymandering that has put them at a disadvantage when it comes to controlling the U.S. House of Representatives. 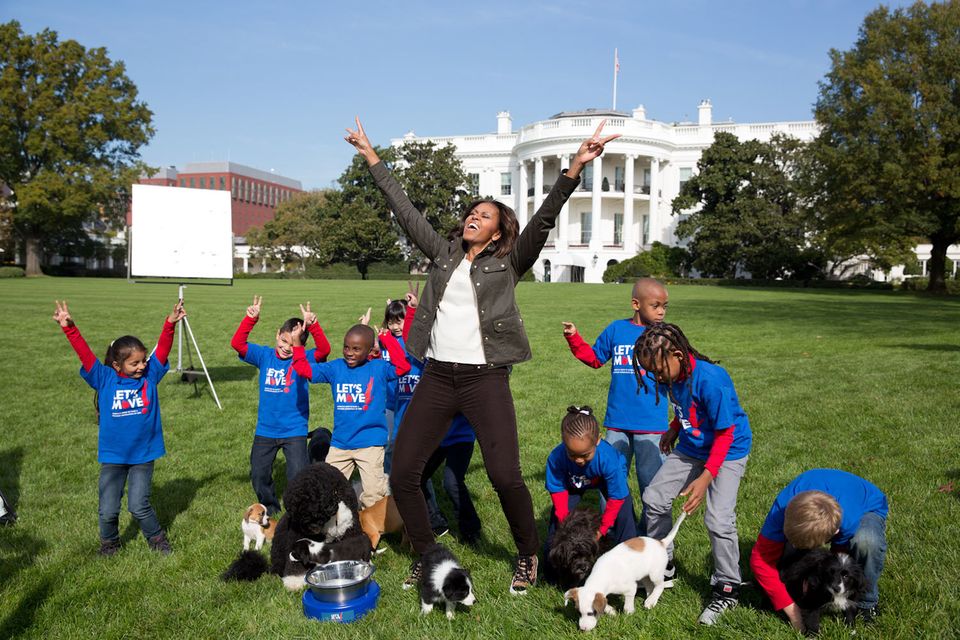 1 / 4
Oct. 28, 2013 'Amanda Lucidon made this photograph of the First Lady as she participated in a filming for the Animal Planet Puppy Bowl on the South Lawn of the White House.' (Official White House Photo by Amanda Lucidon) This official White House photograph is being made available only for publication by news organizations and/or for personal use printing by the subject(s) of the photograph. The photograph may not be manipulated in any way and may not be used in commercial or political materials, advertisements, emails, products, promotions that in any way suggests approval or endorsement of the President, the First Family, or the White House. (Photo by Amanda Lucidon/The White House/Corbis via Getty Images)
NASA 382199 via Getty Images