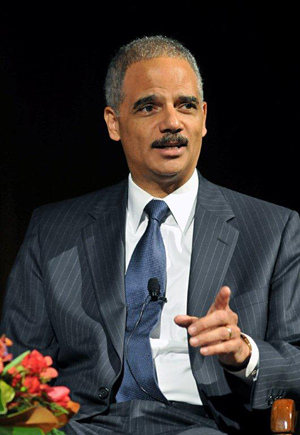 Holder's much-anticipated speech comes amidst the Justice Department's recent scrutiny of new voting restrictions in Texas, among other states, which critics say discriminate against minority voters.

"In 1965 when President Johnson signed the landmark Voting Rights Act into law, he proclaimed, 'The right to vote is the basic right without which all others are meaningless.' Today, as Attorney General, I have the privilege and the solemn duty of enforcing this law," Holder said, speaking in a packed auditorium to a supportive audience.

The Justice Department is currently examining new voting restrictions in Texas and seven other states that require voters to present state-issued photo identification cards. In the past, voters could present other forms of identification. Critics say this restriction would disproportionately affect minorities, the elderly, and students who do not have such identification and would be deterred from voting. Proponents assert that the restriction will prevent voting fraud.

"Although I cannot go into detail about the ongoing review of these and other state law changes, I can assure you that it will be thorough and it will be fair," Holder said. "We will examine the facts and we will apply the law."

Holder defended Section Five of the Voting Rights Act, which requires 16 states, including Texas, with a history of discrimination to pre-clear any voting procedure changes with the Justice Department or a panel of federal judges. Section Five was reauthorized in 2006 with strong bipartisan support, but it is being challenged today in five lawsuits which claim that the United States has reached a level of electoral equality that precludes the need for Section Five.

"I wish this were the case," Holder said. "The reality is that in jurisdictions across the country, both overt and subtle forms of discrimination remain all too common. You don't have to look far to see recent proof."

Two of Holder's examples came from Texas. He mentioned a Texas redistricting plan that a court ruled impermissibly discriminated against Hispanic voters. Holder also mentioned recent census data indicating that Texas has gained more than 4 million new residents, the majority of whom are Hispanic, but said that Texas has not proposed any additional congressional seats representing Hispanic voters.

The Justice Department, Holder said, cannot fight alone for voting rights. He asserted that "the ability to shape our law remains in the hands of the American people."

"For all Americans, protecting this right, ensuring meaningful access, and combating discrimination must be viewed not only as a legal issue but as a moral imperative," Holder said.

Holder outlined three ways to advance reforms. The first is countering deceptive materials that aim to prevent certain voters from going to the polls. For example, in 2006 14,000 Latinos in Orange County, California received letters that read, "If you are an immigrant, voting in a federal election is a crime that can result in jail time."

Holder said that during President Obama's first year in the Senate, he introduced legislation to deter and punish such dishonest efforts. Though the proposal did not advance, Holder announced that on Wednesday, Senators Chuck Schumer and Ben Cardin will re-introduce this legislation.

Holder identified neutral redistricting as the second area of reform.

"If we allow only those who hold elected office to select their constituents instead of enabling voters to choose their representatives, the strength and legitimacy of our democracy will suffer," Holder said.

For the final area of reform, Holder called for modernized voter registration. "Today, the single biggest barrier to voting in this country is our antiquated registration system," Holder said.

In the discussion with LBJ Library Director Mark Updegrove following the speech, Holder discussed the significance of delivering his policy speech from the LBJ Library.

"I wanted to talk about the issue of voting rights here at the LBJ Library, the best venue in world to talk about this issue," Holder said. "I want to put this country on the course that Lyndon Johnson set so that we don't exclude people from having the right to vote, but expand the way in which people have the right to cast their ballots."

"What are we doing to make real the promises that made me attorney general? I have a unique responsibility that I feel in my core to make sure my time as attorney general does right by President Johnson and President Kennedy. At the end of the day, it makes this country all that it possibly can be."

A version of this piece first ran on the website of The Alcalde, The University of Texas's alumni magazine.

A previous version of this post incorrectly credited the photo. The photo is by David Valdez.