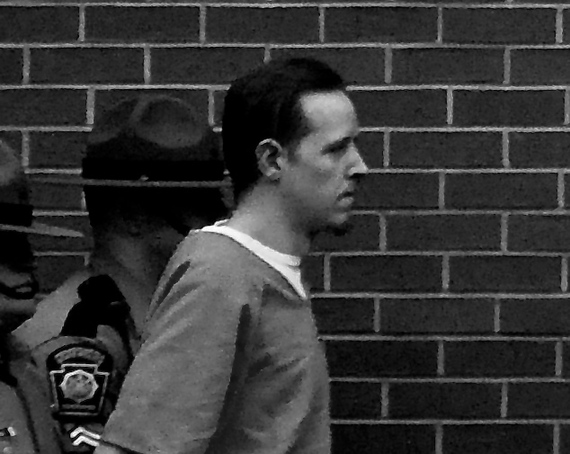 Greetings from Milford, Penna., the county seat of Pike, and happy post-Halloween, all ye souls and saints, sinners too. Our nightmare has partially ended, but we shouldn't forget--Requiescat in pace, Cpl. Bryon Dickson, and our best wishes for the recovery of wounded Trooper Alex Douglass. May your families know some peace now that the number one suspect has been captured. Let justice prevail--Eric Matthew Frein is no longer among the Most Wanted killers in America. Terrorizing as a rabid raccoon, we have him where an 1815 jailhouse once swung men in its bluestone gallows. One less wanted man walks alone in chains.

Do not worry, he will not leave our sight. Not now, not ever, not in this tip of Penna. I saw them escort his weary carriage--a mad fool in an orange jumpsuit--through an empirical 1837 brick courthouse you would expect from a small town like Milford. The old buildings still work, even better when we pay attention to them.

Murderer--survivalist, born to kill, taught in school, admired. Picked up a shotgun and fired. It will come in handy. It will give you a job someday. It will place you, this skill, in the history books--ill-legendary killer, if it is you let it be over. But will real madness ever be over? Will guns always be available to the insane? The mentally ill have access, and they should not. The privilege of the second amendment demands competency, the mentally ill should be treated and not tred--but they should never have guns--this murder was psychotic and perhaps preventable. 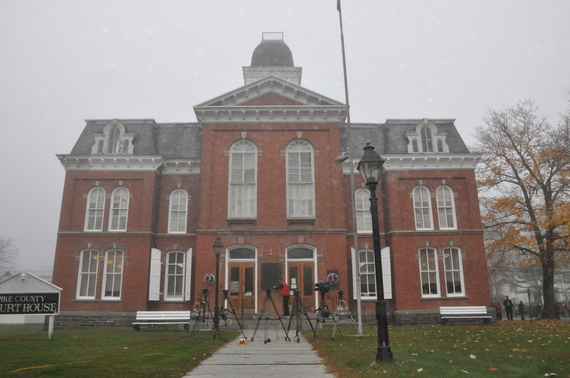 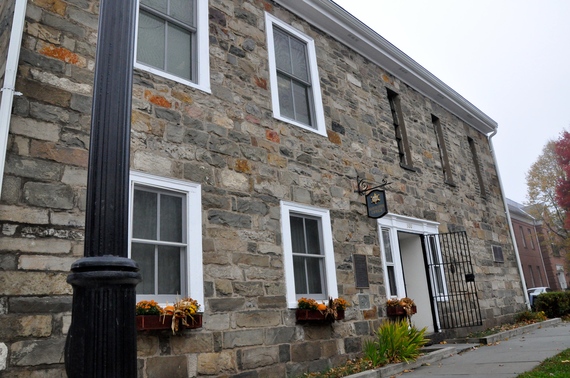 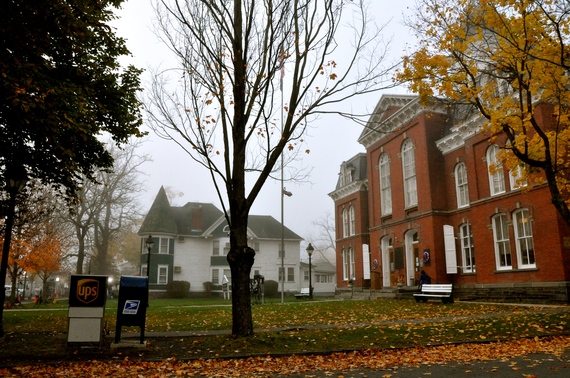 I am a local, I work in the woods. But I am in town today, now, standing here taking pictures like I did in 1979 when the Iran Hostage Crisis ended and I raced to freedom road with a super-8 movie camera to film the buses driving by--all those yellow ribbons.

The mist that settled on Milford was so light. The field stone churches still chime here, and they did at wondrous moments like a symphony of criminal possibility. The town trees still clung to their leaves. They fought to hold on to their yellows, oranges and reds until Eric Frein returned. They are not yet ready for winter, either is Frein, here or in the wild.

I watched the parade of police cars in the mist, military trucks too, and posses of unmarked cars, the sheriff, the guards saying sensibly--"Stand behind the lines." And we did because it seemed like the proper thing to do, watch and best silent. Boundaries uncrossed--the courthouse and the process were dreamlike. But the murder in the back of our minds--a nightmare. 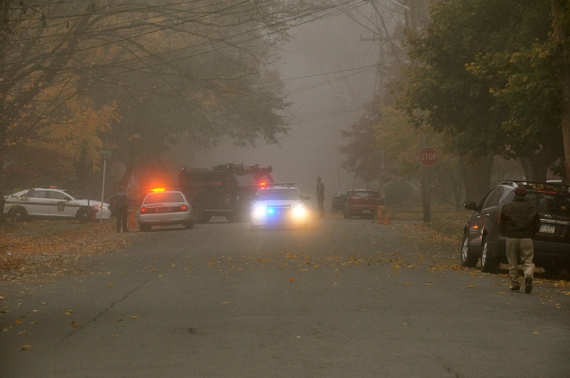 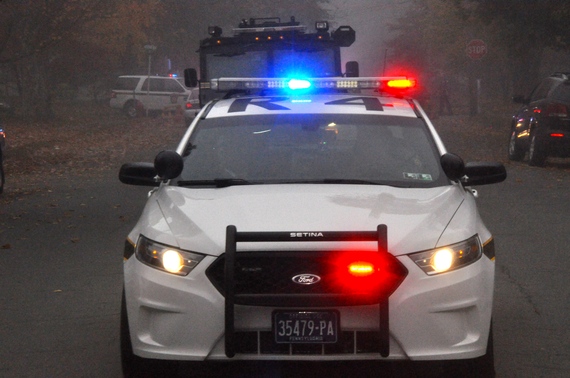 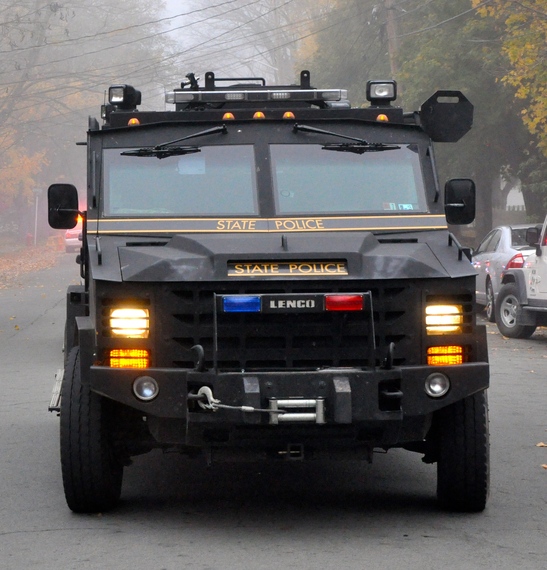 All the photographers and newsies jostling reminded me of footage I had seen of Lee Harvey Oswald's arrest and violent murder in November, 1963. The teenagers of Milford, the working class, the service industry, the local landscapers, and Flamingo Road too--rushing to the courthouse for the arraignment of Eric Matthew Frein. Historic building, historic event, suspected cop killer captured and removed from our mountains by the military. Then I began to feel the tug of ruthless vengeance seep between suspect and the people. Cries from the crowd echoed off the walls as his doomed body made soft shadows in the cuffs of a dead Trooper.

You always imagine an assassin, don't you? Gun violence is shaking too many to death--an even bigger sleep. So this is a good time to wake up to the saturation of weapons in our culture. This was a civil town that kept it's civil head, and no one made the mistake of risking another life for the sake of revenge--let the court do it's job. You could slip inside without cel phones or photographic devices. You could watch Frein walk in to that old courtroom from the outside, and see the flow of the judicial process on a very grand scale. As the Delaware River flows beside us, for a small community it was a theatrical and powerful event.

Frein looked weak, he looked defeated, because he was dismantled bit by bit. In honor of our fallen Penna. sons--start counting, then subtracting guns and enacting restrictions on who gets to own them. We should start with a better understanding about the quantity of guns, the cost in both lives and bodies, make reduction our goal, and learn to compromise, because the Second Amendment is not going away as I type this. Neither hunters, law enforcement, criminals, advocates, private citizens, collectors, nor those lives who depend on the wild food they kill and eat. There's a difference between a person who possesses a gun and respects their neighbor and a psychopath. The mentally ill have access, and they have no right to the privilege--that is respecting the Second Amendment and a civil society. This cold blooded murder of a father, a public servant--the murder of every innocent American, and the terrorizing of our towns and cities, our schools and sanctuaries, is not a price I should pay for the right to bear arms. 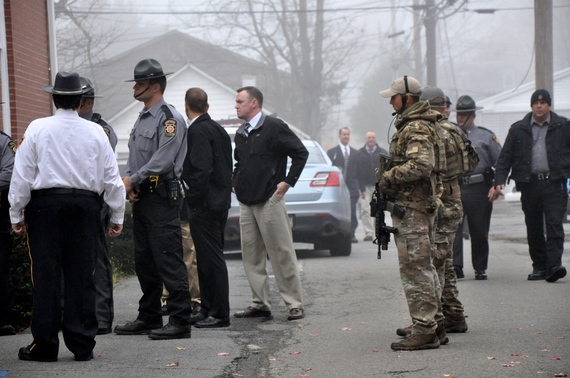 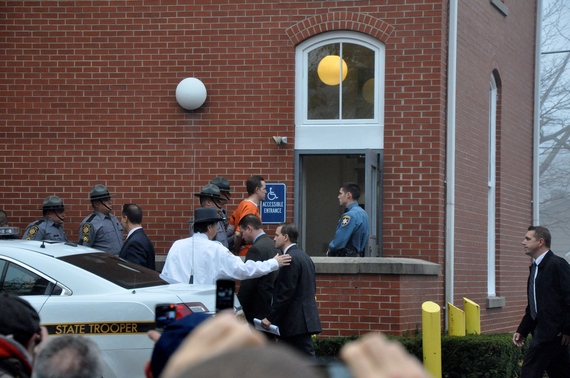 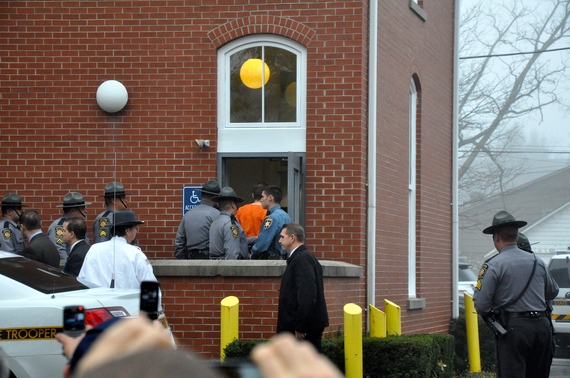 You see the fury in men's eyes. You see it in their bodies too. Tense--wood strong as the black walnut. They are meant to challenge, search and rescue, achieve, hunt--so be proud for the work you have done. A murder of one's fraternity brings on a whole new posture in those who belong. They stood like arrows, those who captured Frein and brought him to Milford.

Witness our weapons crisis in America, because we have one, it's in the numbers like bullets flowing over every counter. Access to free mental health care, less stigma, weapons certification that includes background checks, improved statewide licensing, added to an overall strategy to reduce the number of guns will preserve the amendment and reduce violent crime. A hunter's skill is not just in his bull's eye, it's in his mind too--and If the mind isn't firing he shouldn't be holding a gun.

For service and justice, for the families and friends of the deceased and the wounded, for all of America this Thanksgiving--Frein has been captured, and that is an early gift. Put a copy of the Constitution in your child's lunch bags, they should know and learn it's meaning. Doing so beside a candy bar helps ease the burden, the awareness of our shared responsibility, as well as this document's brilliance in every aspect of our American lives. 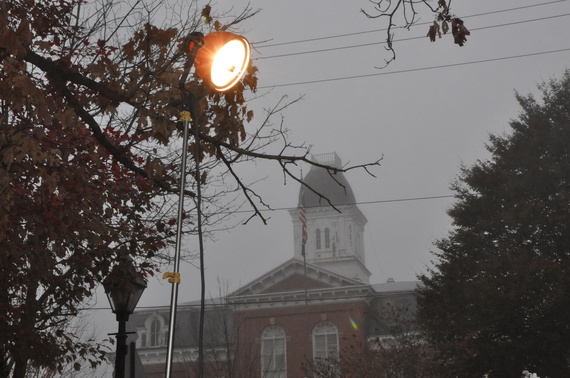