Canadians love dogs. Across Canada 6.4 million dogs are kept as family companions according to the most recent data from Canadian Animal Health Institute (CAHI).

I'm not sure if dogs who split their time between Canada and the United States are included in the CAHI data, but I'm sure that Penny McCormack would agree that her "Dad" actor Eric McCormack should be counted amongst dog-loving Canadians. Eric and Penny recently took part in a Cruelty Free International photoshoot to bring attention to the cruel use of dogs in laboratories. 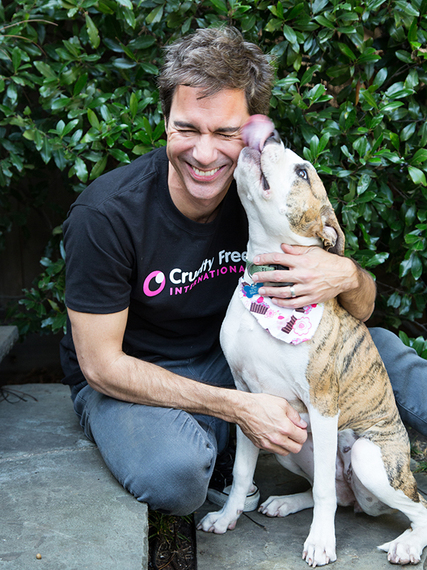 "I hope that dog lovers around the world will support the Cruelty Free International global campaign to end the use of dogs in outdated and cruel experiments." - Eric McCormack

Wait. What? Shelter dogs being sent to laboratories?

Yes: a little known and dark practice called 'pound seizure' involves laboratories obtaining dogs - and cats - from animal shelters for use in experiments or teaching. Dogs from shelters are categorized by the animal research industry as 'random source' because the health histories and exact source of the animals vary and may be unknown. According to the most recent animal use data available from the Canadian Council on Animal Care (CCAC), 14,685 dogs were used in Canadian research institutions in 2013, and most of those dogs, 10,096 of them, were from 'random sources'.

It's easy to understand why the dog loving Canadian public is so uncomfortable with this. Pound seizure erodes the very core of a shelter's purpose - to care for animals in need, find new homes for homeless animals and to reunite families with lost companions. A shelter that releases animals to a laboratory loses the public trust. Indeed most Canadians would probably agree with Eric McCormack,

"Shelter dogs should be adopted into loving homes not used in cruel experiments. That's why I support the Cruelty Free International global dog campaign."


As an Ontario native I'd guess McCormack would be disappointed to know that Ontario is the only province in Canada where pound seizure is still required by law. As such animal shelters must provide animals to registered research facilities if they request it. The province of Quebec is also problematic because it fails to address pound seizure - neither requiring it nor prohibiting it, thus leaving the door between shelters and laboratories open.

The good news is that despite the failure of provincial law to protect shelter dogs from laboratories, many municipalities and animal shelters in Ontario and Quebec have rejected pound seizure. The practice is also being rejected in other ways. In the United States the National Institutes of Health (NIH) ended all funding for research involving random source dogs in 2015.

So why not just make pound seizure of dogs, and other animals, illegal at the provincial or even national level already? We've got the science, public opinion and Eric McCormack on our side!

The time is right for Canadian law to match modern standards, and public expectation by officially prohibiting pound seizure, and thereby strengthening protection for shelter animals and setting an example for other countries to follow.