What allegedly started as a prank has ended with a Connecticut teen charged in the death of a friend's sister.

Eric Morelli, 18, was arrested in Southington on Tuesday, after police concluded he was responsible for the death of 19-year-old Kristen Milano, WFSB News reported. 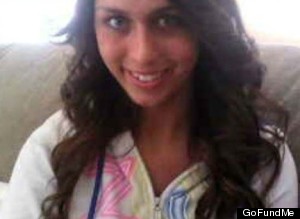 According to Foxct.com, Milano, 19, was the victim of a deadly fire Sunday night that destroyed the Southington apartment she lived in.

"Firefighters made entry. They made it to the second floor, were confronted by very high heat, very punishing conditions, and during the fire attack they found her in one of the bedrooms," Southington Fire Department Lt. Glenn Dube told reporters Monday morning.

A lit sparkler started the blaze that killed Milan. Morelli, who is friends with the late teen's brother, allegedly threw the sparkler through a window of the second-floor apartment to wake up his friend, WFSB reported

"He was just trying to chill with her younger brother and he thought it was a good idea to throw a firework up there, trying to be funny," Kristen Milano's friend, Kyle Cima-Yannel, told WFSB.

Another friend of the late teen, identified only as Joe, added, "It's not funny, not funny. [It] opens [your] eyes about the dumb things people do."

The county coroner determined Milano died of smoke inhalation and her death was ruled a homicide, police said.

Morelli has been charged with first degree manslaughter and three counts of first-degree reckless endangerment. He was released Wednesday on a $150,000 bond.

"My client ... and his family are extremely sorry over what has happened," Morelli's attorney, Raymond Hassett, said in a statement to WTNH News. "This is particularly difficult as Eric was a long-time friend of Kristen. Eric never intended to harm anyone and he is very remorseful about this tragedy. He has been fully cooperative with law enforcement and will be responding to the charges in court."

Morelli is scheduled to appear in Superior Court in Bristol on July 7, The Hartford Courant reported.

A GoFundMe page has been set up to help Kristen Milano's family pay for burial costs. To donate, click here.