CNN's Erick Erickson wants people to know that he pays taxes, and he thinks that the Occupy Wall Street protesters should stop whining.

The CNN contributor, who also founded the conservative blog RedState, helped launch "We Are The 53%" to counter the "We Are The 99 Percent" Tumblr. The site says that it features messages from "the 53% of income-earners who pay taxes" and "refuse to b-tch about it."

Erickson posted a picture of himself holding a scribbled message that read, "I work 3 jobs. I have a house I can’t sell. My family insurance costs are outrageous. But I don’t blame Wall Street. Suck it up you whiners. I am the 53% subsidizing you so you can hang out on Wall Street and complain."

ThinkProgress points out that those three jobs are "blogging at RedState.com, a lucrative television contract with CNN, and a radio gig that paid the previous host $165,183 a year." 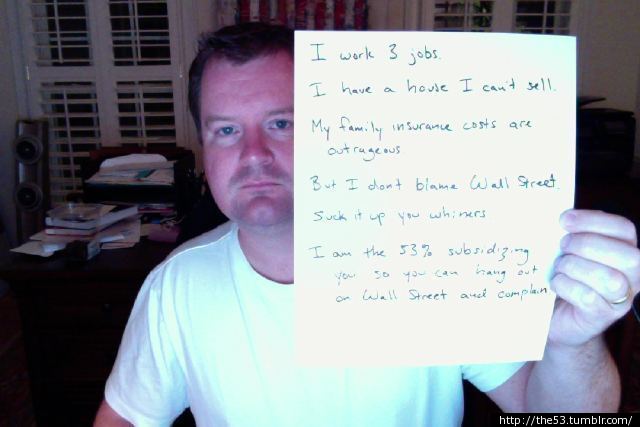