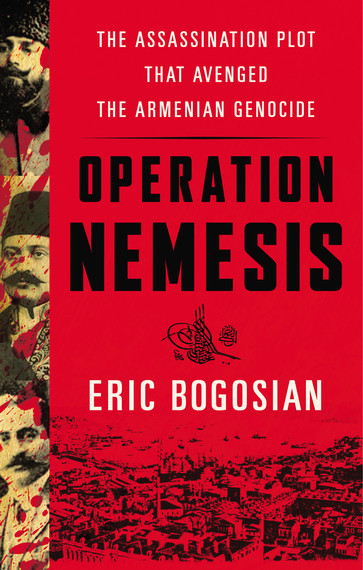 If you had to write a really brief elevator pitch for Eric Bogosian's riveting new historical memoir Operation Nemesis: The Assassination Plot that Avenged the Armenian Genocide, it might go something like this: John Le Carré meets James Bond meets Murder on the Orient Express. Few historical exposés read so fluently: I picked up the book one recent afternoon and stayed up almost twenty-four hours to finish it.

Operation Nemesis was the remarkable plot to avenge the murder of 1.5 million Armenians perpetrated by the Young Turkish leadership after the Armenian Genocide. Planned mainly from headquarters in as unlikely a place as Watertown, Massachusets, Operation Nemesis was masterminded by Shahan Natalie and a small cohort of Tashnags colleagues. The Tashnags are a nationalist party that had at one time been allied with the Young Turks or Ittihad ve Terraki (also known as The Party of Union and Progress) and collaborated to overthrow Sultan Abudul Hamid II in 1908 and theoretically establish a new democratic state on the lands of the Ottoman Empire. The streets of Istanbul brimmed with hope as all parties anticipated a more open future of equality, including the Jewish and Christian minorities of the Empire.

It seems that you always have to be careful of any political party with the word "progress" in it and true to form the Young Turkish leadership, grown paranoid at the loss of its Balkan territories, soon turned on the unsuspecting Armenians. Within a decade or so after taking power, these same men--led by a trio of "Pashas"--Enver Pasha, Mehmet Pasha and Djemal Pasha--ordered the mass murder of the Armenians and remaining Christians in the former Ottoman Empire. In the first genocide of the 20th century, they would bear the ultimate responsibility for killing 3 million Christian Greeks, Assyrians and Armenians .

For Operation Nemesis, revenge wasn't particularly swift, but it was certainly thorough. In the course of a little under a half decade, almost the entire former Young Turkish leadership was gunned down in cold blood by a group of small-time merchants and youth of limited funds. In due order Djemal, Talaat and Enver as well as Dr. Behaeddin Shakir--the Armenian Hitler-Goebbels-Eichmann and Mengele--a good dozen or so people--would be dead. (Enver was actually killed by the Russians in 1922).

Bogosian's wonderfully fast-paced and eminently readable work asks important questions about how one writes and represents history: how did the real story behind Operation Nemesis remain hidden for so long: the popular version has it that Talaat Pasha's killer Solomon Tehlirian acted alone and ran into Talaat on a Berlin Boulevard, almost as if he were casually walking his dog. How did the Armenians track all these Turkish leaders down and snuff them out (Bogosian's possible answer is surprising, as he explains in the interview below) Was any of this justified or understandable? What lessons can we take away from the legacy of the genocide and those who avenged it?

"What Talaat did not know as he strolled down Berlin's fashionable Hardenbergstrasse on this cool spring morning was that his alias had already been discovered. Danger was much closer than he imagined. Even as he stepped lightly among the local Berliners on his way to the Tiergarten park, he was being followed. Across the street and parallel to him, a young Armenian émigré from Turkish Armenia tracked his course. Unlike Talat, Soghomon Telihrian was almost invisible, figuratively and literally. No one knew his name, no one in Berlin would ever recognize him, and in the midst of this posh neighborhood of White Russian émigrés, he did not stand out at all. In a few moments, that anonymity would end." (p10)

If you want the details of what happens next, then you will just have to buy a copy of the book!

I sat down with Bogosian near his Tribeca home to ask him a few questions about his new book and what drew the cerebral performer and some time Law and Order detective to Operation Nemesis. 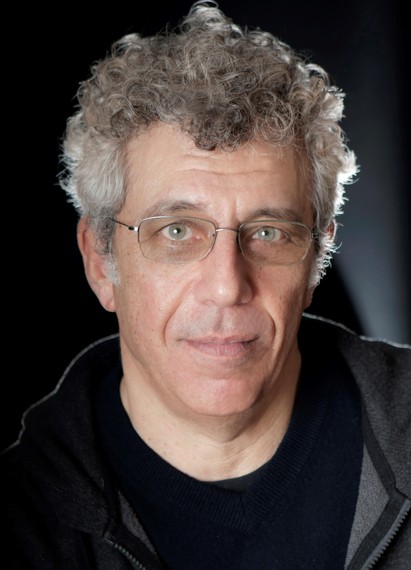 CA: Hello Eric. First of all, congratulations on a really remarkable achievement. Your book is informative, even spellbinding at times. It reads like a Hollywood thriller.
EB: Thanks.

CA: This was a real project of love.
EB: I worked on it for seven years and read some 800 books on Armenian and Turkish/Middle Eastern history.

CA: That's amazing. Did you grow up very Armenian?
EB: I grew up in a working-class class and mainly Irish town--Woburn Massachusetts. So part of my life was "macaroni and cheese." But another part was definitely great Armenian food as well, I guess. Two of my Grandfathers were deacons in the Armenian Church. And although my birthday is April 24th (Armenian Genocide Commemoration Day) the event was never really discussed at home. When I became a performer, I didn't want my Armenian identity to define me. Or to be viewed as an "ethnic" actor.

CA: What changed?
EB: A few things. I softened up to my ancestry on the set of Atom Egoyan's Ararat. Reading Peter Balakian's Black Dog of Fate was also a factor--his trying to reconcile his American and Armenian identities.

CA: Tell me about your new book, Operation Nemesis.
EB:I didn't want a black-and-white story. You know "a people sent into the desert followed by a bunch of random revenge killings" type-of-story. I figured I'd better know my shit. At first, I thought I might write a film script, but then I realized how complex the story really was.

CA: It would make a great film.
EB: Thanks.

CA: What surprised you the most, while you researched it?
EB: That the Armenians involved were just small-time business guys.

CA: How did they pull this all off, then? I mean track people down over three continents?
EB: Well, I believe that they had help from British intelligence. And they were fluent in Turkish. Also, there were many other dark émigrés in Berlin--White Russians especially--so they could hang out in cafés or at Jamal Asni's Tabacco Shop and blend in. I mean these people changed history. They removed a whole layer of Turkish leadership.

CA: Regarding the Armenian Genocide, how did the CUP get away with such a monumental crime? And how did the Tashnags involved with them not realize what was going on?
EB: Well, one there is the revolutionary mindset. The types of people who take risks--sometimes they win (Mao, Che Guevarra) and sometimes they lose. Also the CUP or Young Turks were extremely secretive. Historians Taner Akçam and Vahakn Dadrian believe that the CUP understood that they were committing a huge crime. Hence they left no traces and infamously sent out double telegrams, for example, that contradicted each other.

CA: What was your process? How did you research your book?
EB: I read everything I could related to the topic. I met with historians including Aram Arkun who translated much of Tehlirian's memoirs for me and answered many historical questions that I had...And when I mention facts about the Armenian Genocide per se, I use only first-hand accounts like Vergine Svazlian's eyewitness accounts of what happened to Armenian children/orphans (The Armenian genocide: Eye-Witness Testimonies of Survivors) or the book by the German writer Wolfgang Gust (The Armenian Genocide: Evidence from the German Foreign Office Archives, 1915-1916).

CA: Were you a history buff in college or high school?
EB: Not really. It's more my affinity for detective work--part of what I liked about being on Law and Order as well.

CA: Did you learn anything new about yourself or your family while writing this book?
EB: I learned that two of my great grandfathers had been killed during the Genocide. And I developed a greater sense of self. I realized that I am also the seven year-old kid who stood next to an old Armenian man making shish kebab during my childhood.

CA: What do you think the Turks owe Armenians or themselves when it comes to the AG and history? And vice-versa...
EB: Well restitution of Armenian property for one, businesses that were all destroyed. And the Turks also owe it to themselves to explain to themselves the criminal element that ran their country... The amazing story of Operation Nemesis also needs to be told. The way people know how the Jews/Israelis got Eichmann out of Argentina. My political perspective--which exists in my monologues as well--is that it's important to understand what the Young Turks thought they were doing. Talaat was cruel; some of his colleagues were ideologues, others pragmatists. And some were just sadists.

CA: Thanks Eric.
EB: Thank you.