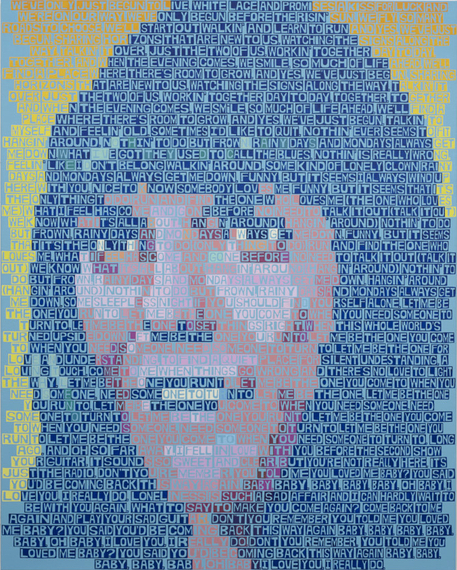 Erik den Breejen's exhibition, There's a Riot Goin' On, at Freight + Volume includes paintings embedded with blocks of letters that devotedly trail into one another, line by line. The acrylic paintings are framed as tributes to cultural icons (mostly from the 1970s), with titles such as Joan Baez (Diamonds and Rust), As Pure and Strange as What I See (For Lou Reed), Karen Carpenter, and Allen Ginsberg.

The grid-like formation of lyrics, which are the primary constructive element in these works, are reminiscent of rongorongo tablets, a form of proto-writing from Easter Island made with dense rows of glyphs on shaped pieces of wood. These tablets have never been deciphered, whereas den Breejen's hand-painted fonts are easily accessible, but both seem to exist in a space among text, object, image and symbol.

Den Breejen's palettes morph in procession, and the portraits they form quickly become unmistakable, portraying the artist who spoke or sung the words upon each canvas. The monolithic presence of den Breejen's muses are not narrowly sensed within a culture of commodity or celebrity, and rather the complexity and heartfelt striving of their lyrics and monologues stretch forward to us over time with both grace and honorific meditation. Den Breejen's paintings leave us face to face with a cathartic and exhilarating confirmation of the way that song lyrics (as poetry, as art in general) can transcend fixation and reach to us across time. 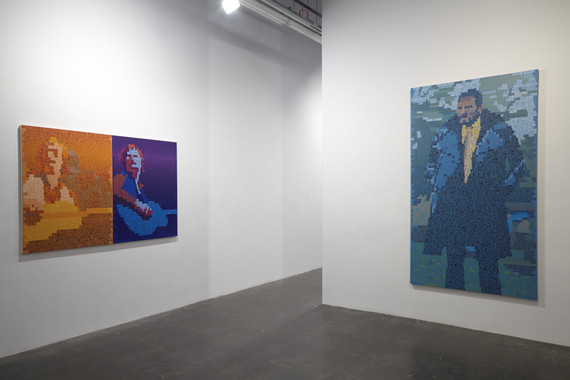 While fully recognizable, the portraits are also specters, skillfully composed by fragments of the long-ago. This sense of apparition echoes den Breejen's painted lyrics of Karen Carpenter's song, Superstar, which ruminates on absence and distance: "But you're not really here, it's just the radio." Den Breejen's choices, in terms of the individuals he represents and the lyrics which he uses to form their image, are often profound and meaningful.

Den Breejen's paintings recall aspects of Pop art, but engender a unique aspect of this movement's potential, focusing on a breadth of poetics rather than the works' iconic status within culture at large. Harry Nilsson, in the lyrics to Jump Into the Fire, intones a sentiment that echoes the vast worth and power of operating with a focus on the human scale, which can build toward a renewal of empathy in the face of the seemingly immovable:

This is one tiny notation within the Nilsson Schmilsson album, which den Breejen faithfully restates in entirety in his larger than life painting of the musician. Like all the lyrics that den Breejen samples in his works, it is a mix of visceral emotion and a notable patina of times past. 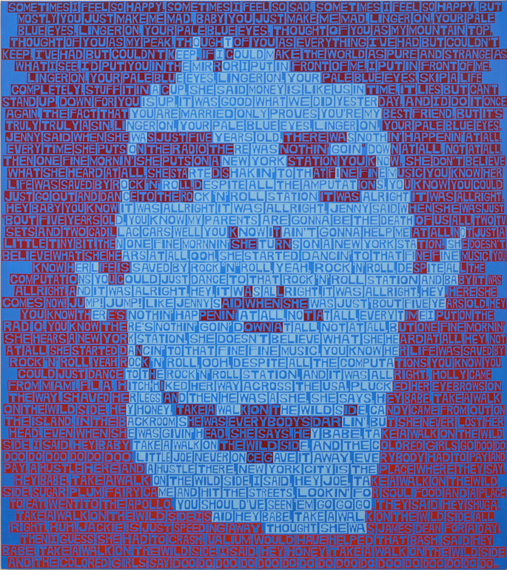