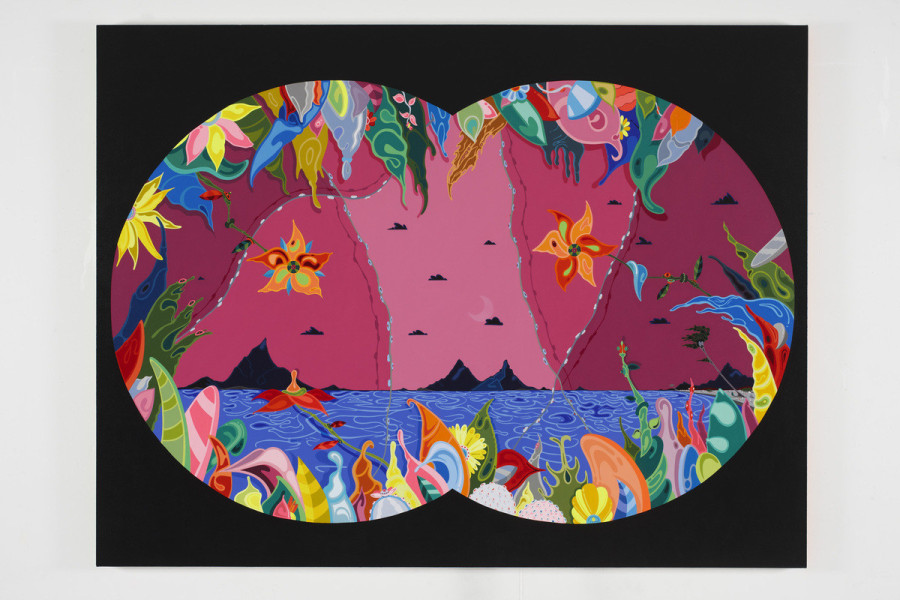 "I guess making paintings for me is about responding to living," painter Erik Parker explained to The Huffington Post. "I couldn't see any other way of doing things. It's like a broken narrative in response to what it means to be a human being."

Parker's massive canvases contain all the abrasive colors and warped wanderings of an hour wasted on the internet, only instead of leaving your head numb and buzzing, they provide a strange sort of clarity, as if you'd gone on a hike. Most often, they depict the most unnatural nature-scapes you've ever seen, with pink swampy waters, Seussian trees gone awry and flowers plucked straight from your uncle's party shirt. It's the kind of nature that links the past up with the present, aligning 1970s psychedelia and old school kitschy landscaping with whatever mutant greenery our future holds for us.

A new series of Parker's work, titled "¿What About Now?" is currently on view at Madrid's Galería Javier López. They'll make their U.S. debut this fall at New York's Paul Kasmin Gallery. 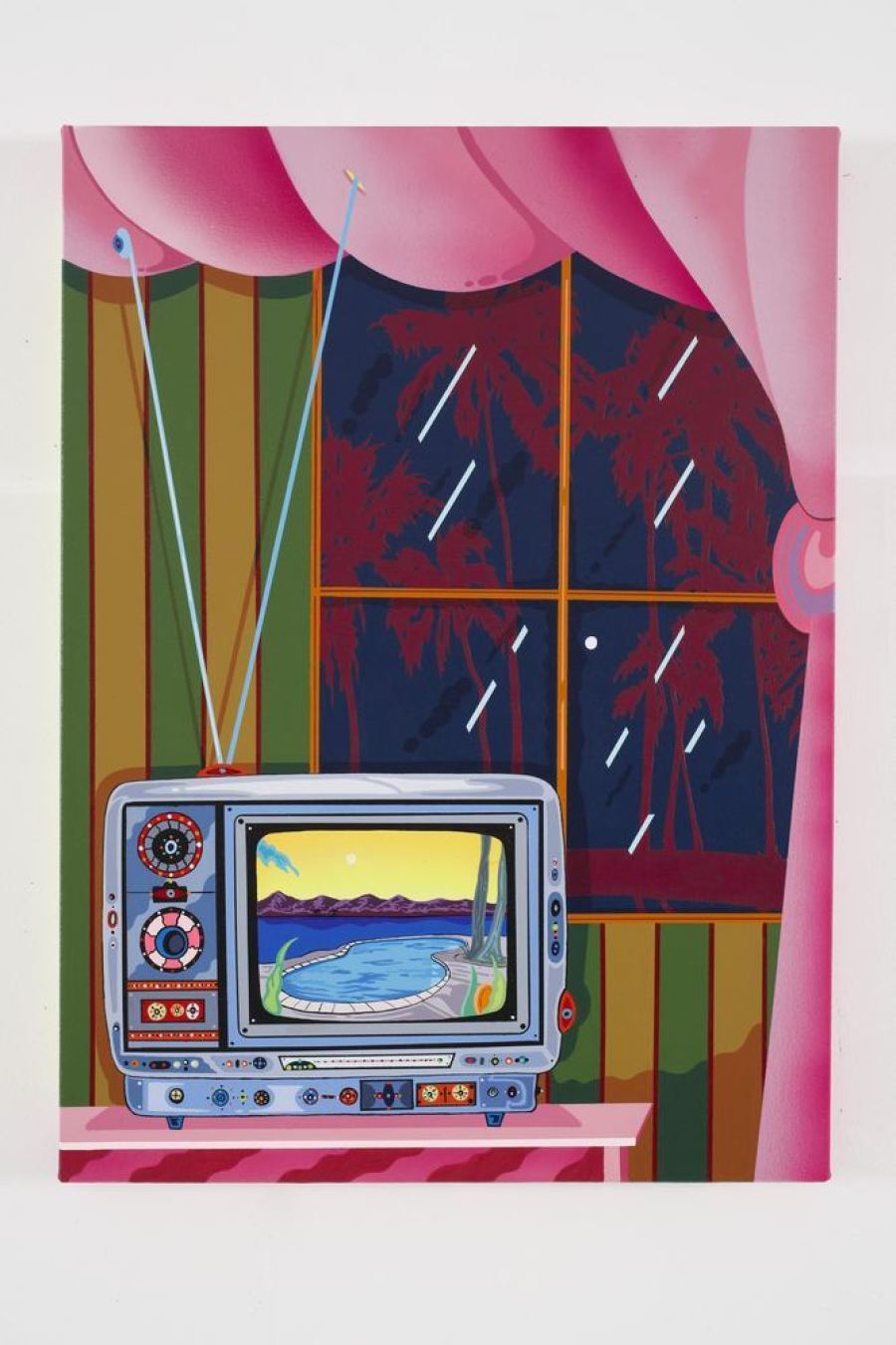 Parker, born in Germany and based in New York, studied with Peter Saul at the University of Texas, Austin before getting his MFA from Purchase College of the State University of New York. "What I learned from [Peter Saul] was: Sure! You can paint a landscape, talk about current events, and incorporate some history in a single artwork," said Parker. "It's a challenge, but why not?" There's a lot uniting the two painters, including but not limited to a rebellious spirit, political awareness coupled with charming irreverence, a persistent counter-cultural itch and an aversion to formalism.

The latter inclination was revealed when discussing Saul's current show at Venus Over Manhattan, comprised of works made in the 1960s. "I was familiar with a lot of those paintings when they came out and they're still, you know, really really cool," Parker said. "Way more interesting than Jasper Johns -- right? Like, Jasper Johns is mild. It's just like, really? What does that have to do with anything?"

Saul's influence is certainly evident in Parker's newest series, a super-sized travel brochure for a flattened landscape dwelling somewhere between your television screen and a hallucinatory trip. An organic logic governs the structure of the acidic-tinted canvases, with wild vines and dripping leaves organizing the other contents of the frame. Each image recalls elements of everything from Symbolism and Pop Art to countercultural comics, 1980s graffiti and outsider art. 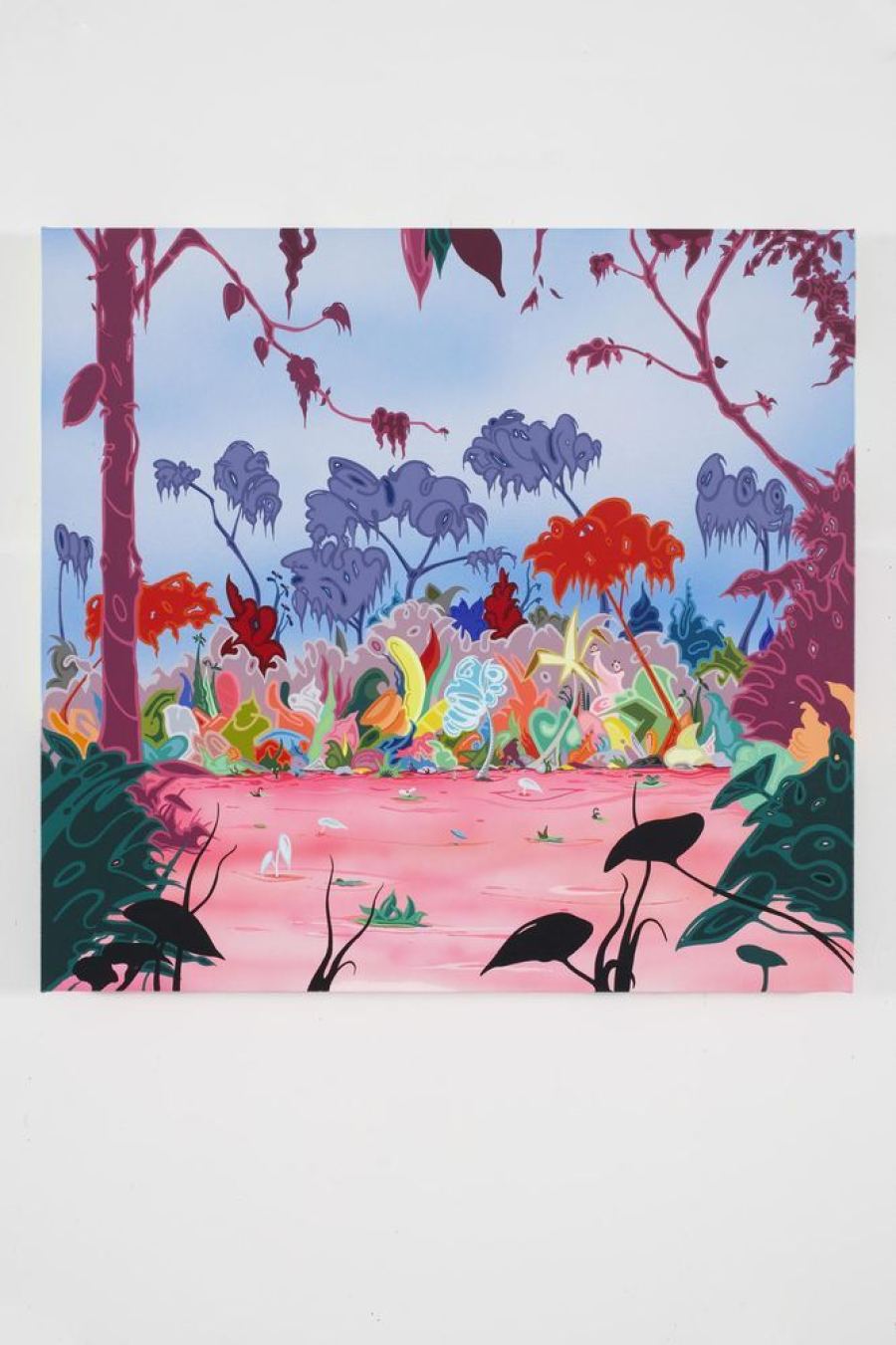 Although stylistically Parker's current exhibition is all over the map -- and yet, undeniably all his own -- the subject matter is slightly easier to pin down. "I think I'm always trying to paint swimming holes," he explained. "Searching for swimming holes is something I always like to do. I haven't really questioned it or thought about it too much. But I think that's something we can all agree on: swimming holes are awesome. Or else, there's something wrong with you."

The content was also influenced by the particularly brutal winter New Yorkers faced this year, and Parker's desire to escape it via the portal of his studio. He conjured the spirit of summer by playing Brazilian music, Bossa Nova mostly, while he worked. And the Melvins. "When I'm working alone I listen to a lot of the Melvins," he said.

Yet there were other more sinister things on Parker's playlist as well, relating to the recent onslaught of dismal news regarding police brutality. "We have a lot of cops killing people, killing black people. So I was listening to the news a lot, as well as this book called The New Jim Crow. I was reminded -- I'm in my 40s -- that nothing fucking changes. It seems like every 20 years we have to have this discussion again. If you look at the early 1990s or late '80s hip hop -- NWA, Ice Cube, all these dudes on the west coast. They were talking about the same thing. And if you look back to early blues like Lead Belly, they're talking about cops killing people. It never changes."

Looking at most of Parker's works, drenched in acidic colors and tropical destinations, you'd likely fail to notice their association with current events. And that's precisely the point. "It's just cathartic for me," he explained. "I'm just trying to respond to what's going on, because I can't do much about it. Some days you turn on the news and you can't believe these things are going on. You can't believe someone is sitting on death row perfectly innocent for 25 years, and then the courts overrule it and say, yes, this man is innocent, but they still can't get him out. You hear things like that and all you can do is go -- well, beaches look good. Let's just get out of our world, you know what I mean? It's just a way to cope."

Even the natural escapes the world provides us, Parker adds, are likely in jeopardy. "Everything is bittersweet," he says. "The landscapes of the beaches and stuff. These things are leaving us too." But what's harrowing in life is often riveting in art. "It's more interesting than sweet-sweet." 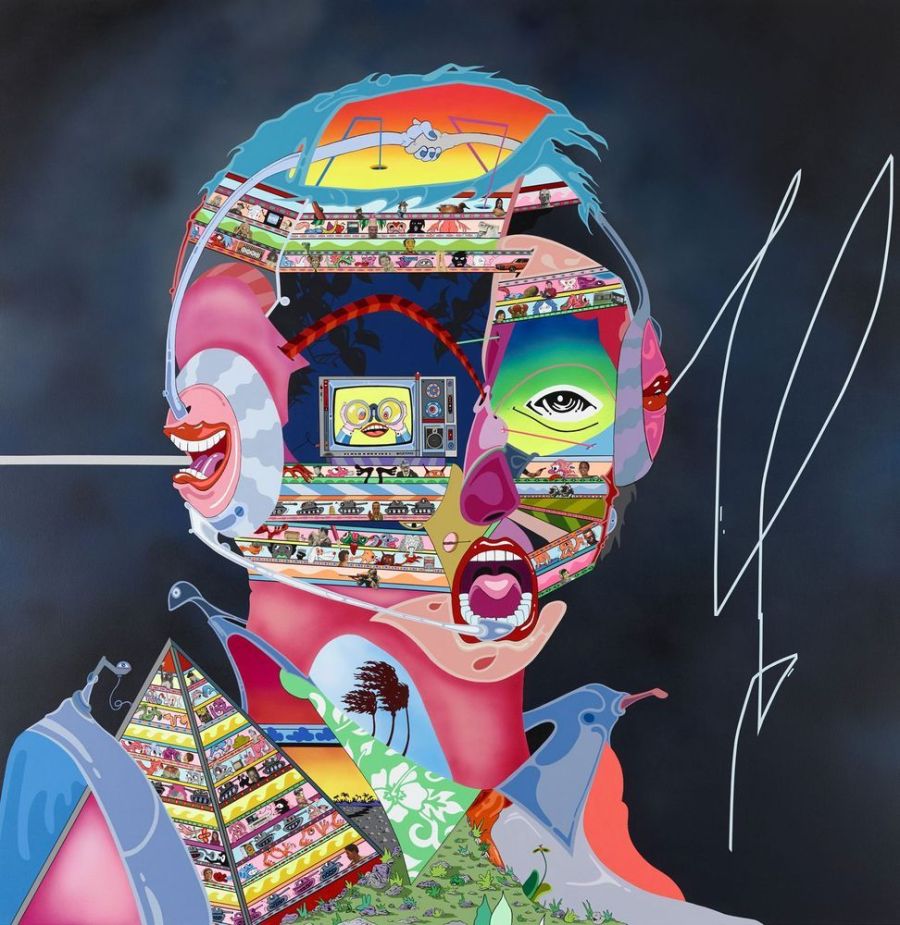 Parker's compulsion to create in the face of the chaos of everyday life aligns him in spirit with the outsider artists he often resembles in style. In particular, he's inspired by Joseph Yoakum, a self-taught artist of African American and Native American descent whose landscape drawings were created entirely from his imagination. "What I really like about Yoakum is that that dude never went anywhere. I come down to the studio, I live a few blocks away, and I'm just making up these places. You're flipping through Instagram, find an image of a place, Google it, project it onto a canvas and then draw it your own way. You sort of have your own location and can just make up a name for it."

Aside from his ability to travel endlessly without going anywhere at all, Yoakum also possessed a genuineness that appeals to Parker. "When you break into the category of outsider or self-taught art, I find that it's totally sincere. They could give a shit about making money or being in a museum or something. It's about the urgency of making something, so that thing can exist."

Parker doesn't place himself in this category, explaining that coming face-to-face with such authentic art-making can make him feel "like a phony." However, his urge to create worlds -- overgrown, neon, sharp-edged swamplands to be exact -- to combat the ugliness in the world around him, doesn't seem to be all that different. "The art is just a way for me to deal with this stuff on a regular, day-to-day basis. Just being a human being in this world."