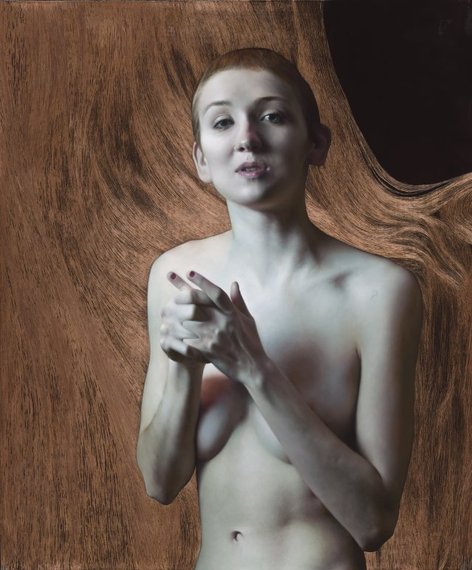 When artist Erin Anderson hit on the idea of painting on copper plates she achieved a kind of aesthetic alchemy that took her art to a new level: something very special began happening in her work. "The dynamic quality of the metal," Anderson comments, "was just what I had been looking for." Anderson's most recent images, which depict deeply-shaded nudes that work in concert with the suggestive patterns of etched and burnished environments, radiate both timelessness and freshness. Considering that Anderson hasn't even reached her thirtieth birthday, her breakthrough is remarkable.

I recently interviewed Erin Anderson in connection with her upcoming New York exhibition: The Human System. 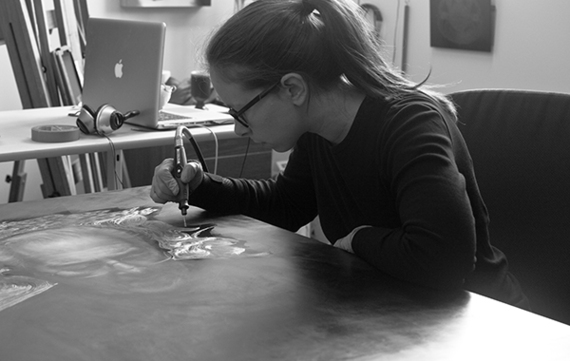 Tell me a bit about your education and training...

My mother enrolled me in classes with a local artist named Page Cottier when I was seven. I know it was around seven because I found a watercolor of a bluejay at my parent's house and at the bottom was my signature and my age. Page had studied at the Schuler School in the 60's and was an enormous advocate for realism. Even though we were young, she took our work seriously and encouraged us to take it seriously as well. We did a lot of master copies from books during my time there, a little bit of life drawing when it could be arranged. She would also take a small group of us to the Toledo Museum of art once a week during the summer where we would pick a painting or sculpture from their Old Master's Collection and copy it. I will be forever indebted to her for giving me a solid foundation.

I wound up getting a scholarship for art to go to Miami University. For the first two years I majored in Studio Art and Psychology. I had every intention to pay for my Psychology education with art and apply to graduate schools to get my PhD. My art classes there reinforced this plan as I was constantly encouraged to abstract and deconstruct what I was working on. Not that those techniques don't have merit, I'm happy I can see that now. But at the time I wasn't ready to see it and I was frustrated that no one could teach me skills. I wanted someone who could push me to become more proficient. I wasn't going to find that there, as there wasn't a single adjunct in the art department who could actually draw. 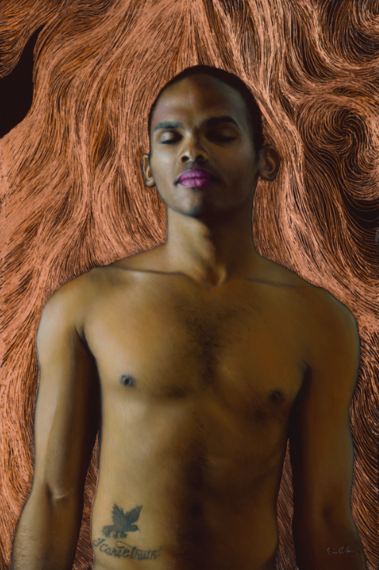 In that kind of situation, how did you become interested in realism?

I remember sitting in the basement of my dorm taking a break from some sort of homework and started googling realism. I came across Jacob Collins' website, which blew me away! I'd never seen contemporary realism, only old master work. For the next couple of years all I did was research and gradually found this underground network of realist artists that fascinated me. It changed my entire life direction and my new goal became to once again pursue art. I wound up finding Anthony Waichulis at what was then The Waichulis Studio. His program is very effective and extremely rigorous. After I graduated from Miami, I packed everything up and moved to Pennsylvania to study there. That program gave me the basics I needed to really feel confident in my abilities. 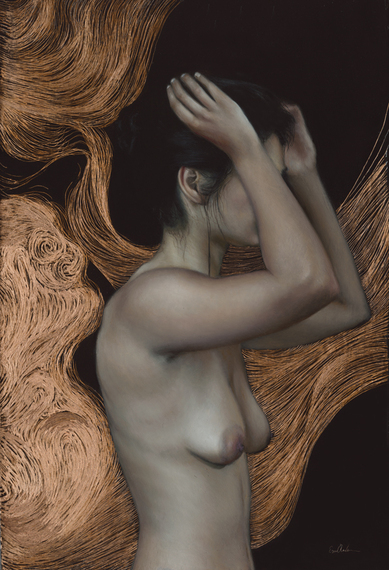 What would say are the most important themes of your recent works?

In my current work I envision closing the gap between the isolationist individual through biomorphic imagery that mimics systems in nature. One of the biggest things I'm exploring with this work is the idea of connectivity vs. isolation. With the emphasis placed on staying in touch via Facebook, texting, and Instagram etc., there are many ways to be exposed, but not as many for genuine connection. Likewise, we humans have grown farther and farther away from nature, the very thing that is meant to sustain us. I almost feel like humans have become causal observers of their surroundings instead of being active participants. It's a mentality that holds the human being as sovereign over the landscape instead of understanding that he is part of it.

One other theme of my work, both past and present is depicting REAL people. I know it's not always the most marketable work, but I'm not so interested in painting the idealized nude. I've just seen way too many lounging females in soft light to really feel it has any significance or meaning. There are some who claim beauty in art is one of the cornerstones of significance. To illustrate that beauty within the incredibly narrow scope of idealized female form (largely painted by men!) is a frustrating thing to me.

I find each subject I paint to be beautiful even though they're neither conventional nor idealized. I like their realness more than I like painting a perfected version of them. Artists like Jenny Morgan, Daniel Maidman, and Daniel Sprick paint plenty of female nudes, but you can feel they're real and you know they're not being put on a pedestal. They're beautiful because of their imperfections and that's what makes the work compelling.

Lastly, a more personal goal of mine and maybe not a theme of the work per se, has been to gain a thorough understanding and connection with my model during my time working with them. During our photo shoot I don't ask them to pose, I don't direct them. Instead we have an hour-long conversation about whatever they want. The end result is thin slices of time that showcase the model in genuine moments. I find myself painting the details with a real desire to capture the model in a way that's true to who they are. I know their backstories: how one has persevered through multiple cancer relapses, the struggling single mothers, the lost young adult, the young woman with an unknown past and the young man whose past he'd like to forget but feels it important that he never does. Their imperfections and flaws give way to relatability and in some ways act as a mirror through which we see pieces of ourselves. 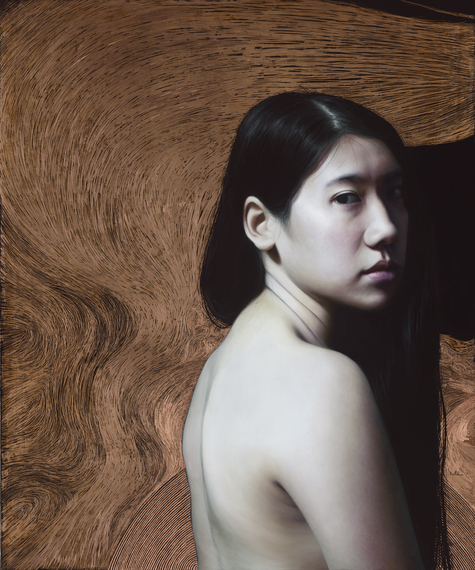 How and when did you decide to paint on metal?

I wanted to incorporate a material that played with abstraction and light. I experimented with many different avenues before I finally started to develop my techniques on copper. I started trying to manipulate light during photo shoots to depict the surrealist element I was looking for. I would pass light through a prism so it would break into abstract shapes of color and cast it on the model. I did one painting this way and I feel it had its merits but it wasn't quite what I was searching for:

I found a lot of inspiration through work that integrated metal leaf. I had seen the effect in person and found it very engaging but again, was still not quite what I wanted. It lead me to try powdered metal (silver specifically) which was a complete flop. I don't think I really knew how to use it best. Out of the recesses of my brain I remember seeing a painting online that was done on copper. I had never thought to paint on it before, but thought I didn't have too much to lose.

My first piece on copper was a big learning curve. I spent like $120 on a thick sheet of roofing copper and had no idea what I was doing. I also was not particularly adventurous in my approach. Everything was meticulously planned out. I mocked up the entire composition in Photoshop, created a precise geometrical design in Illustrator and made a stencil with it. My earliest pieces were done this way by masking off areas of copper and painting over top. Realizing this process had severe limitations, I decided to make a 180 and began diving right in with an etching needle and no plan. I'm happy to say there was only one painting I felt was so terrible that I sanded the whole thing away. Otherwise, there were triumphs and there were "meh" moments but nothing I'm ashamed of. 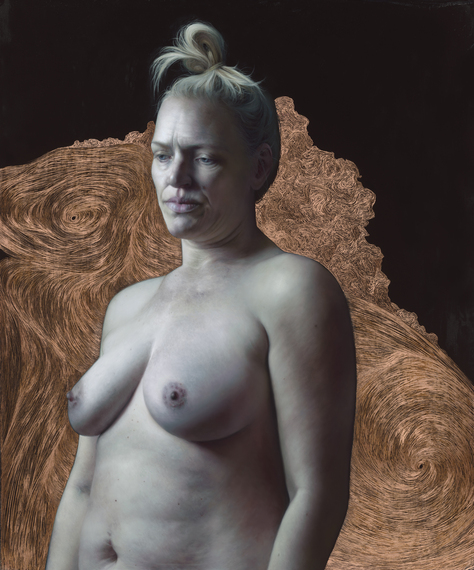 How has your work on metal evolved?

Today my process is much different than when I started. I allow myself to paint the portrait in its entirety and try not to overthink what will be etched into the copper. After the painting has dried about a month, I have a loose concept for what the etching will be but I also allow room for it to develop in an organic way. I can say sometimes the etching comes easy, making decisions on where to go next is easy, and sometimes it's the most stressful damn thing you'll do all week. Always in the back of my head is the knowledge that most of the marks I make I have to live with, it's very difficult to cover up area you've etched through. So if you can imagine standing back and not being thrilled with it yet and still not knowing quite what to do--it ruins your whole day.

That said, I'm very happy with the results of this work. The dynamic quality of the metal is exactly what I had been looking for. The viewing experience changes dramatically depending on the environment. For example: one of my favorite times of day for looking at the work was morning. I have a long studio with a north-light window at the end and for a time some of these paintings were hanging on the adjacent wall. The combination of cool morning light from the window along with the warmth of the spotlight above each one almost made the background look 3D.

I was also struck with the way one of these paintings looked when I was loading them up in my car to drive them to get scanned. The light from the street lamp made the portrait of Karen look almost like she was on fire.

Every mark in this metal looks different as you move around the piece. Different techniques yield different visual effects. For example, if I want a more subtle look, I use a burnisher or an etching needle so the light is reflected in a uniform way. If I want something very dynamic and dimensional, I use a rotary dremel, which scatters the light in many different directions. 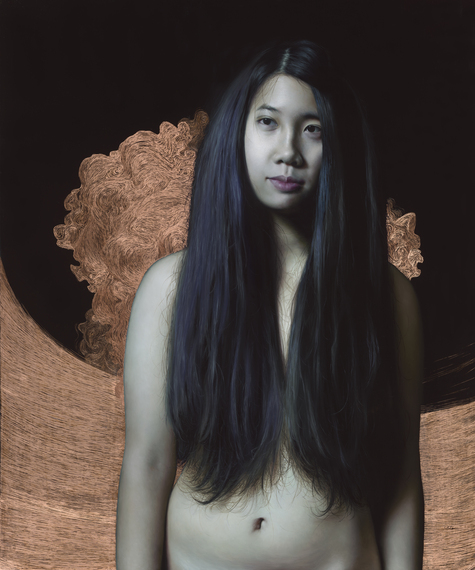 What kind of relationships and effects do you want to generate by using the textures and energies of the metal against the human figures?

I have an interest in the idea of complexity and structure where we can't see it. I think that's part of the reason Point.B Studio's wind maps fascinate me. On a given day, you can walk outside and feel the breeze, but the full scope of the system that created it is unknown to us. Yet it's there, the entire system is there and it creates its own larger body even though we can't see it. I like this idea of a larger system only I've applied it to humans. I also like the effect copper has because you can create an infinite number of ways to view the work. It lends to the idea of a dynamic system whose basic structure always remains, but can appear different.