Erin Andrews interviewed Yankees pitcher Joba Chamberlain yesterday, and HuffPost noticed something strange at the very end of the interview. As Erin thanks Joba, he says something that's not picked up by the microphone but is captured by the cameraman. Right before they cut away, Andrews can be seen rolling her eyes and making a face that most closely resembles disgust. What could Joba have said to elicit such a reaction from Andrews? We can't tell, but maybe you can. Watch (closely) the interview and tell us what you think in the comments. 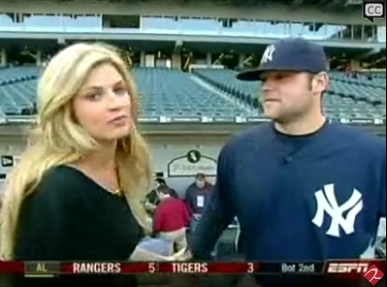