Here's a bizarre exchange between CNBC's Erin Burnett and Representative Barney Frank (D-Mass.) that occurred on the teevee today. It began with this set-up from Burnett:

BURNETT: Mid-terms obviously play a role in all of this. I want to get to the heart of what everyone's talking about.

What is "everyone" talking about? Taxes, apparently! Specifically, a plan to let the Bush tax cuts expire on the top income earners.

BURNETT: A lot of people think that one thing that will help the economy going in consumer spending is not raising taxes. And some Democrats, you know, in your party have come out and said they support extending the Bush tax cuts not just for people who earn under $250,000, but for everybody.

Burnett is sure quick to toss around terms like "everyone" and "everybody!" Let's be clear: the "everyone" that Burnett refers to as doing a lot of "talking" are Republicans in Congress and a few skittish Conservadems who probably pose as deficit peacocks in their spare time. The "everybody" she refers to in the sentence "not just for people who earn under $250,000, but for everybody" refer to "2 percent of households," roughly.

Now, what happens to the deficit picture if the Bush tax cuts are not allowed to expire or are not paid for? 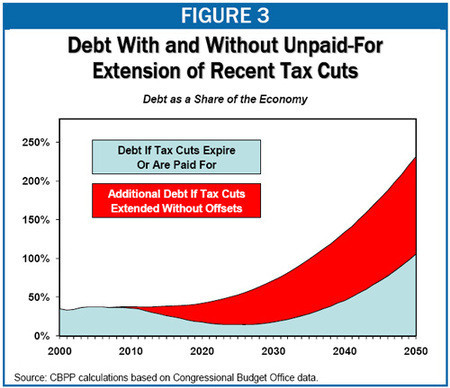 See, there's also an "everybody" out there that constantly insists that we must drop everything we are doing to battle the deficit, so maybe all these "everybodies" should get together for an hour and get their stories straight.

Ezra Klein is available to explain what's going on here:

But the plan was never to have the tax cuts expire. Instead, the idea was that people would get used to the new tax rates, and no future Congress would want to allow a big tax increase, so when the time came, either Republicans in office would extend the cuts or Republicans in the minority would hammer Democrats until they extended them. And that's where we are now: Democrats control the government, so Republicans are screaming about tax increases as a way to get Democrats to extend tax cuts.

It's really hard to know where to start with this one. It's not a tax increase passed into law by Democrats. It's a reversion to old tax rates passed into law by Republicans. It's not how law is supposed to work. It's the result of twisting a budget process meant to reduce the deficit so you could use it to massively increase the deficit. And as for the policy itself, it's a fiscal nightmare: No one who professes concern for short-term deficits can argue for the extension of these deficit-financed tax cuts and retain credibility on debt issues. This is a litmus test. It's not Democrats who are trying to pass the largest tax hike of all time, but Republicans who are calling for the largest increase in the deficit in memory.

So, basically, Burnett is hearing a lot of loud, nonsensical "screaming" and confusing it for "everybody."

Now, I don't claim to have a psychic insight into what "everybody" is thinking. But I do know that back in June, an organization called "America Speaks" -- "funded by Wall Street mogul Peter G. Peterson and two other foundations" -- put together "town meetings" in 18 states involving thousands of people, and even after a furtive attempt was made to inculcate them into the Wall Street point of view on economic policy, the assembled participants took to their voting machines and overwhelmingly came out in support of the following policies:

--Raise tax rates on corporate income and those earning more than $1 million.

--Reduce military spending by 10 to 15 percent,

--Create a carbon tax and a securities-transaction tax.

So, here's an "everybody" that will tell you: "Yes, let's raise taxes on some people."

For his part, Frank pointed out, "I feel I'm being somewhat conservative here, because that noted radical Alan Greenspan is for letting all the tax cuts expire."