In one small East African country, the rule of law has been replaced by the rule of fear.

That was the conclusion of a yearlong investigation by the United Nations Commission of Inquiry on Human Rights in Eritrea, which released its report this week. The report lays out in horrifying detail the mass surveillance, torture, enslavement and disappearances under Eritrea’s totalitarian regime since that country gained independence from Ethiopia in the early 1990s. The U.N. investigators said systemic human rights abuses in Eritrea are on a scale rarely seen anywhere else in the world and may constitute crimes against humanity.

The U.N. panel, which was established in June 2014, was not able to enter Eritrea, so investigators based their 484-page report on 550 interviews and 160 written statements from people who had fled the country. Many witnesses were still terrified to provide information to the commission, fearing the reach of Eritrean surveillance and consequences for their families back home, the report said.

Among those willing to tell their stories was an Eritrean who sketched out some of the gruesome torture methods being used and provided the drawings to the commission. A human rights investigator for the commission who helped draft the report said the artist’s identity was being kept strictly confidential for his or her protection.

“The drawings were very useful to help us portray more vividly the suffering and humiliation described to us by many witnesses,” she told The WorldPost. “The 'tying methods' are common forms of torture inflicted on both detainees and conscripts in Eritrea,” she said. 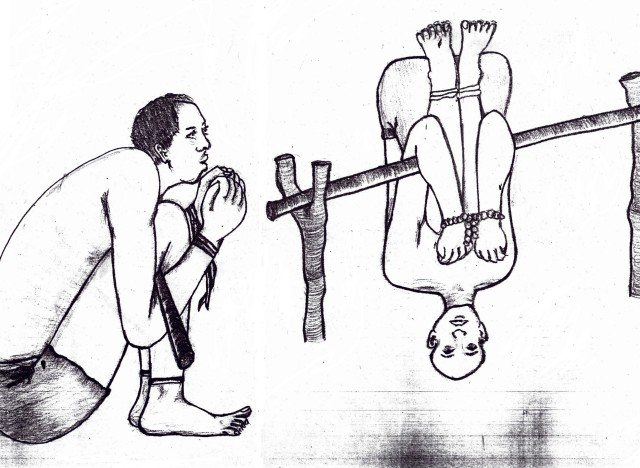 Torch: Victims have their hands, and sometimes legs, tied or handcuffed together, with a stick under their knees. They are hung upside down and beaten, especially on the soles of their feet. © 2015 Eritrean torture survivor

Among the harrowing testimonies in the report, one survivor recalled, “They arrested me, handcuffed me and attached a rope in order to hang me like Jesus Christ but without my arms outspread.” His hands were paralyzed for months, and the pain still lingers, he told U.N. investigators. “There are no rules when torturing. They can beat you five minutes or an hour, as they wish,” he said. 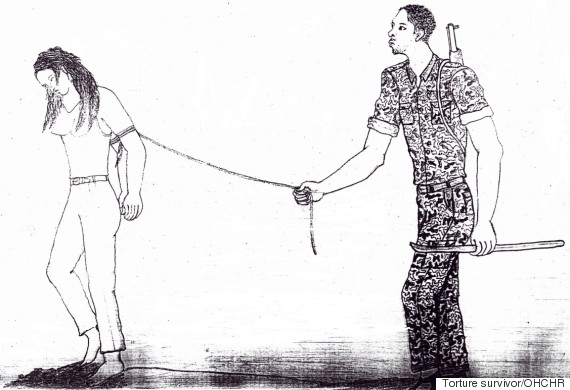 Otto: The victims' arms are tied behind their backs and they're often made to lie facedown on the ground. © 2015 Eritrean torture survivor

It is hardly surprising, the commission said, that many Eritreans are trying to flee their country. Leaving itself is dangerous, as the government keeps the border sealed with lethal force and locks up those suspected of planning to escape. If they manage to get out, more peril awaits. Last year Eritreans made up almost one-quarter of the passengers on often deadly Mediterranean voyages from North Africa to Europe. Nearly 11,000 Eritreans have already reached the shores of Europe this year, according to the International Organization for Migration. 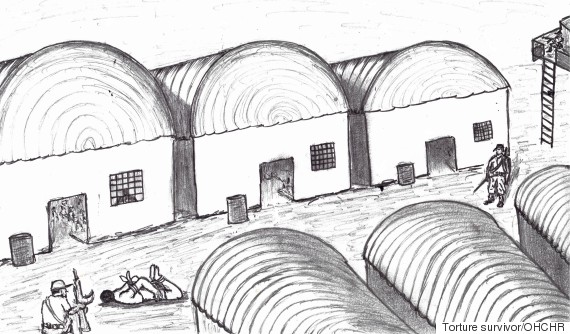 Helicopter: The arms and feet of the victims are tied behind their backs, and they are made to lie facedown on the ground or suspended in the air. © 2015 Eritrean torture survivor

The Eritrean government on Tuesday rejected the U.N. report as “indecent hyperbole” and denied its descriptions of government-sanctioned torture, forced labor and indefinite military conscription.

See more of the artist's drawings with the torture methods labeled, and read the full report of the U.N. Commission of Inquiry on Human Rights in Eritrea here. 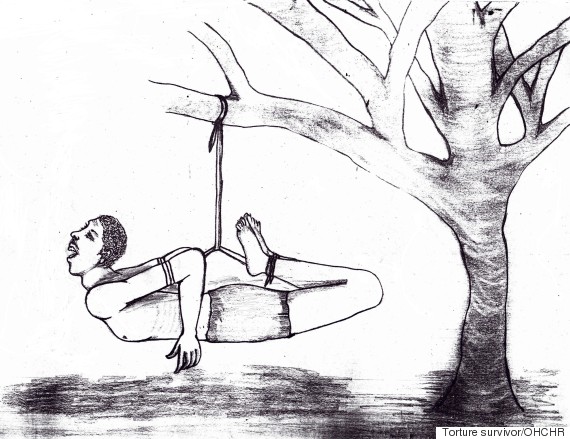 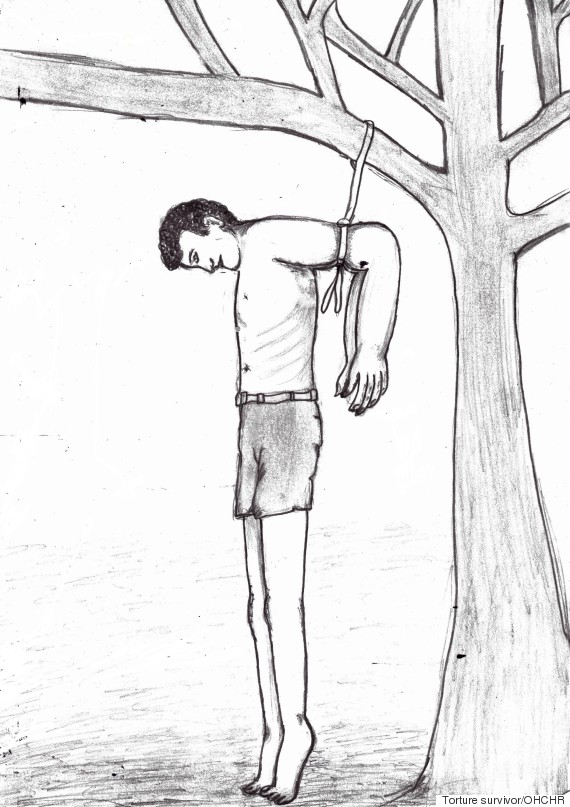 Almaz (Diamond): Victims are generally hung on a tree with their elbows tied behind their backs and forced to stand on tiptoe. © 2015 Eritrean torture survivor 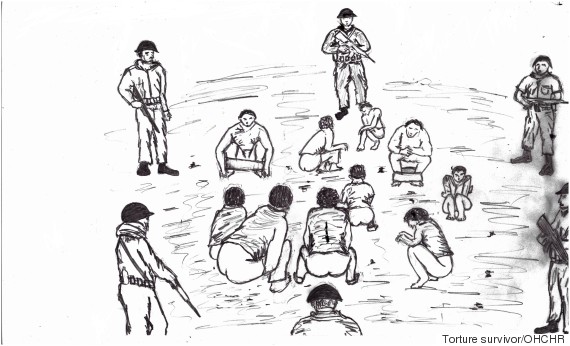 Toilet breaks: Inmates can go out for toilet breaks once or twice a day, often in open spaces covered with human waste, while guarded at gunpoint. Former detainees reported being forced to relieve themselves under extreme time pressure and in humiliating ways. © 2015 Eritrean torture survivor