Writers of the Internet, do you ever find yourself daydreaming of setting it all aside and living like legendary author and noted alcoholic Ernest Hemingway did in order to get the creative juices flowing?

The Ernest Hemingway Foundation of Oak Park just might have you covered. The foundation, which owns the suburban Chicago Victorian where Hemingway was born, this month announced that they are seeking applicants for a program that will allow one writer to use a newly redesigned office in the 339 N. Oak Park Ave. home's attic for one year.

Hemingway lived in the home until he was five years old -- plenty of time for some literary juju to seep into the walls, right?

"The Foundation’s mission is to honor Ernest Hemingway’s legacy through the
promotion of thoughtful reading and writing," the foundation's chairman John W. Berry said in a statement. "We see this opportunity as a way to connect that legacy to new and creative written expression."

The attic space has been outfitted as a "safari writing retreat" featuring Thomasville of Oakbrook's Hemingway collection. According to the foundation's website, the winning writer will also be expected to provide cultural programming in the space, including lectures, workshops or other such programs. Get a sneak peek of the space, via the foundation's Facebook page, below: 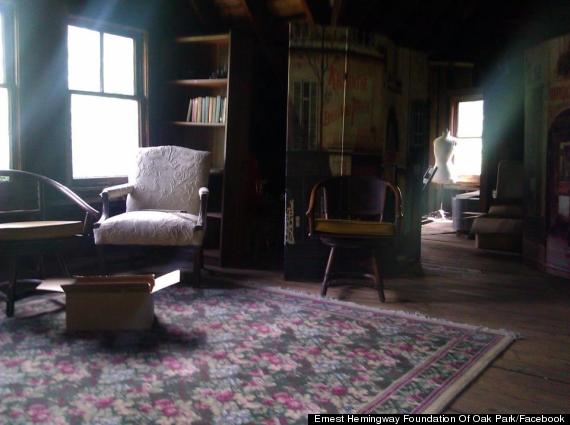 The attic space "in progress."

According to the Chicago Tribune, the foundation isn't intending the space to be a full-time residence for the winning writer, whom Barry told the paper he hoped will be "a really interesting, creative person who likes to write and who values reading and writing."

Applications will be accepted through June 1 and a winner will be announced on July 21 at the Hemingway birthday celebration in Oak Park.