Crocheting provides pleasure and distraction to many who wish to pass the time, yet being a pastime means far more than being just a diversion. Brazilian artist Ernesto Neto's crocheted worlds don't just pass time, they sculpt time, isolate it and reverse it.

In 1994 Neto's grandmother and great aunt taught him to crochet. Moving on from knitted scarves to knitted atmospheres, Neto creates biomorphic environments which alter your relationship to time, space and gravity. Entering them, you become a child again, crawling through plushy labyrinths or knitted wombs. And yet being in the belly of the maternal beast, there is a sense of tradition, wisdom and lapsed time. Something about the stitching welcomes all of its visitors to become children in its presence. We imagine it may be like if Richard Serra began working in cotton candy.

Neto's current exhibition at Nasher Sculpture Center invites you to have your thoughts lulled to sleep while your senses are awakened, as if being swallowed by a hammock spun of spiderwebs. His works remove the complications and excesses of our daily lives, stripping the world down to the essential relationships: space and time, parent and child, body and mind. And with out all the other junk in the way, the patterns emerge, both simple and complex. In order to find out more, we asked Neto some questions about his upcoming exhibition. 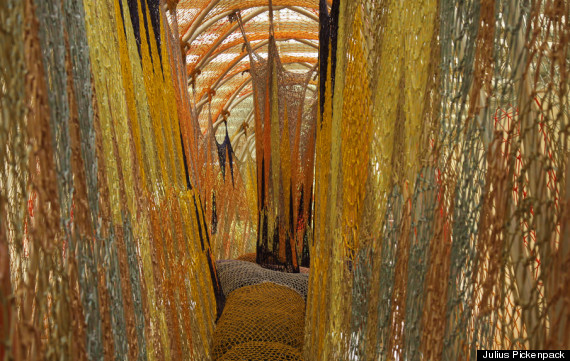 HP: Most artworks are seen, some are heard, but your upcoming installation can be walked on. How did you come up with this idea?

EN: Every work I have done since the beginning is a work in which you have a relationship between things in a physical meaning. Through this relationship things touch each other. This combination of their parameters or their personality or their physiology or their spirit generates the sculpture itself. Many times this sculpture is generated through action of the artist or somebody who is installing it, putting the things together. We always have a kind of steps… you can go backwards through the steps of the making it. The question of you touching it or you dealing with it... it's already in.

I begin to use the space of the gallery so technically people were already inside the work when they were inside the gallery because I began to use the walls, the ceilings, the ground. And then there was one step when I decided to make a kind of a gallery. There would be no pattern separation between the work in itself and the gallery in itself. They would be all made by the same material. This gallery becomes a sculpture inside of a gallery with other sculptures inside of other sculptures. The continuity between our body and the world in itself, the universe, the background… it made me create this space where people could walk in. The piece we have here, through these works I began to make a piece in which you could climb steps and cross the horizon by going up steps. It was a way to be more inside the atmosphere. And then i began to think how can i make a work when people can walk, floating, on the space? And that is how I made these sculptures.

HP: How were you influenced by neo-concretism, and other movements in Brazil and abroad?

EN: I think these ideas of revolution every minute I don't understand every well. I think it comes very much from the protestor, from the protests. I want to be comfortable, not to be fighting with the uncomfortableness all the time. If you think about Samba it is very different from Rock-n-Roll. Rock-n-Roll maybe changed a lot of things by punching things, like a militant [makes drumming noise.] It is a music to put down things. I prefer to swing around things, to swing around the problem. it may be more African in certain ways. There was this history, neo-concretism was a very important moment in Brazilian art. Regarding the outside of Brazil, I'm not very interested in pop culture, in the object for itself. If you mix the pop with Duchamp that is very much what is going on nowadays. I think the contemporary art is becoming a bit academic sometimes. 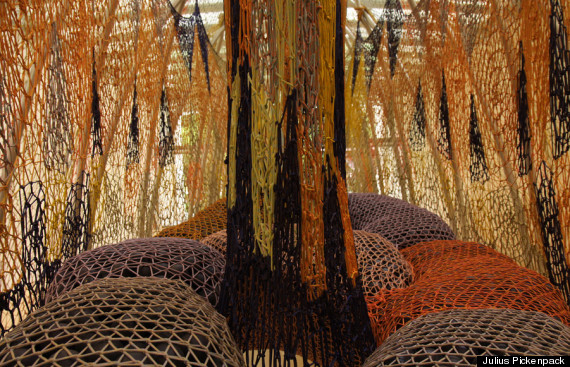 HP: Your biomorphic sculptures are crocheted, a pastime stereotypically associated with the elderly, and yet their playful nature and soft plushy feel reveals childlike qualities to the work. Are you making a connection between youth and old age?

EN: Yeah, no doubt. What I was asking before with evolution and tradition, I prefer to work with both. I love my fathers, my parents. People think very much about the contents but the contents are pretty much the same. We are born, we are going to eat, we are going to fight with our parents, we will make up with them. At the end of the day the content is very much the same. What changes very much is the form. The form we are living today, the forms we are making sculptures with today, are very different. In the end the content looks less different. With this tradition I can do things we cannot do with contemporary materials. All this is made by oil, by polymer. On the other hand, crochet is a question of time. I am making a crochet now while I am doing this interview, it keeps spinning around. I think if people stop and make a crochet for half an hour a day you would have a better day. You have to be a little bit humble to make a crochet because you cannot jump the points too much. You gotta go one after another. It is kind of cool, especially nowadays when time becomes so compressed. With cell phones and all these things, why? To have more time. And now we have less time than we had before because of it. With crochet, you breathe, and let it go. I think it is human and natural.

HP: In a previous interview with The New York Times, you describe your piece at the Armory as "a kind of dance." Could you elaborate on this idea?

EN: I think of dance as a tool that lets us think about our relationship with space and other people, with the work we do and everything. When you dance you normally dance with music, so you have to turn yourself to a rhythm. You sometimes dance with someone else, so you have to turn with yourself and someone else to the rhythm. This rhythm, this atmospheric idea, carries the people together. Puts them in the same balance and lets them float. When I was doing this sculpture, the people who were working with me began to know what to do. It was like a choreography. Everybody begins to get used to the process and people begin to make decisions almost as if it were a dance. There is a kind of order. When you have a sculpture there is a musicality, this one is all about rhythm.

With this piece, if you are laying down there. If someone begins to walk on it, you begin to move too. One thing is connected to another. Everything is connected in some way. This work talks about that. I think with these new hanging pieces mean we are getting closer to this thing I have been trying to work on for a long time. 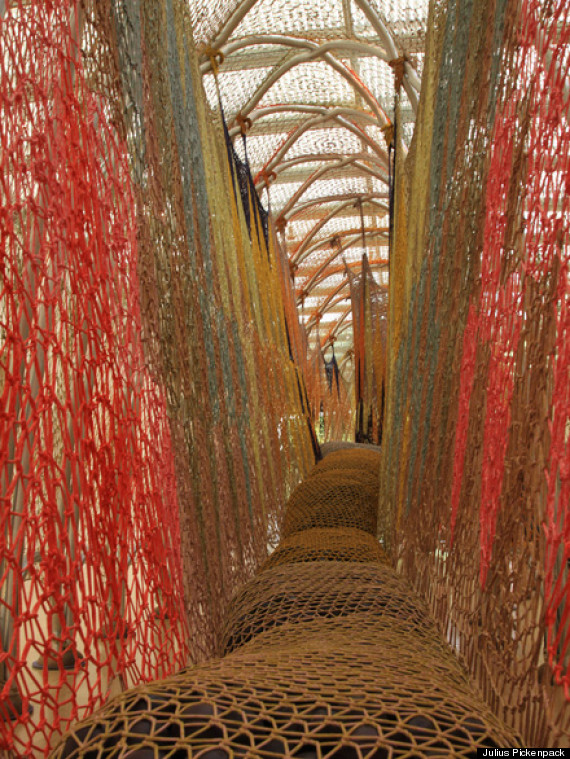 HP: What is a work of art that inspires you?

EN: "The Kiss" from Brancusi inspired me a lot. I think it is a fantastic piece because this kiss is an idea of a kiss. Put the situation of the kiss together, put brutality and delicateness at the same time in the kiss. It is a great piece I have to think about. Another piece from this collection, Linear Construction from Naum Gabo, is made by strings, very melodically. It looks like that bridge in Dallas to me. This piece is a dance, the woman is here with the movement in her body. This is modernity, if you think about it. Lygia Clark has been one of the most important artists for me. Tunga, Richard Serra, Giovanni Anselmo. I have my friends in Brazil, Carlo Bevilacqua and Franklin Cassaro. James Turrell is great, Oladur Eliason. I like Sarah Sze, nothing to do with my work but I like it. I like this guy from Scotland, sometimes. Douglas Gordon. That's a lot of people. Donald Judd was also very important. What really inspires me is often my social relation with my friends and with parties. At parties I am interested in how socially we organize ourselves when we are not compressed by the architecture. 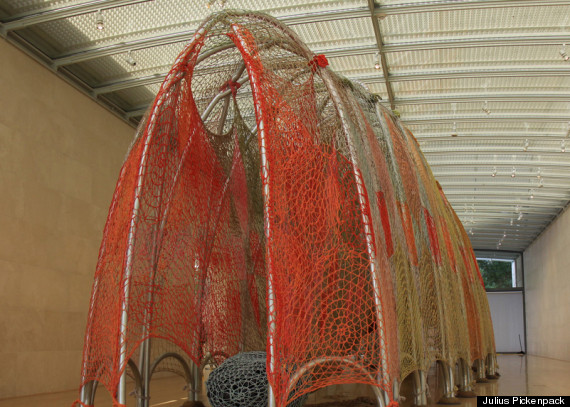 Neto's "Cuddle on the Tightrope" will show until September 9 at Nasher Sculpture Center in Texas. Watch kindergarteners play on Neto's New York structure here. Images of and video courtesy of Julius Pickenpack.