Ernie Banks, the legendary Chicago Cubs baseball player and Hall of Famer, died at age 83 on Friday night in Chicago, a spokesperson for his family said. 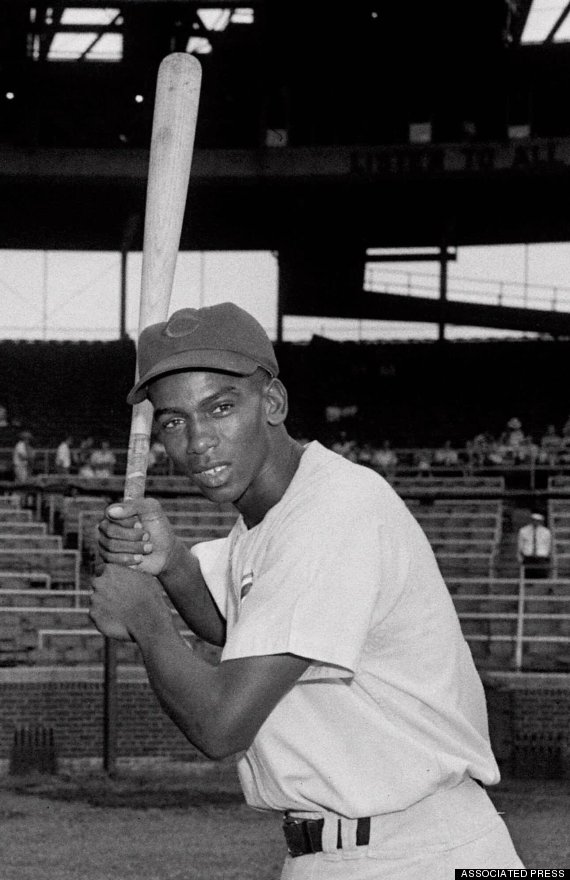 The news of his death was confirmed to the Chicago Sun Times and ABC Chicago.

Known as "Mr. Cub," the ebullient Banks played shortstop and first base for the Chicago Cubs from 1953 to 1971, netting 512 home runs and 1,636 RBIs. Known for his smile and always being eager to play, he was often heard saying, "Let's play two!" Former Cubs manager Dusty Baker said of Banks in 2013, “I just remember Ernie was never in a bad mood." 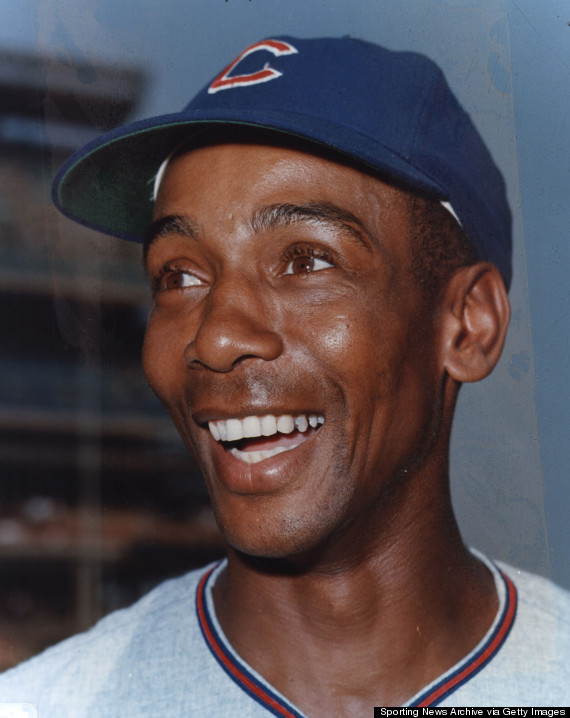 Banks first played in the Negro leagues, becoming the first black player to play for the Cubs in 1953. He started out his pro-ball career with a bang, hitting .314 in his first season, and the following year came in second in Rookie of the Year voting. He would spend his whole career with the team, endearing himself to the city. In a Chicago Sun-Times poll conducted in 1969, he was voted the "Greatest Cub Ever."

Banks was honored as an All-Star fourteen times, and was named the National League MVP in 1958 and 1959. He later became the first player to have his number retired by the Cubs. Banks was inducted into the Major League Baseball's Hall of Fame in 1977.

In November 2013, Banks was honored with the Presidential Medal of Freedom by President Obama, the highest honor awarded to civilians, the Sun Times reported. 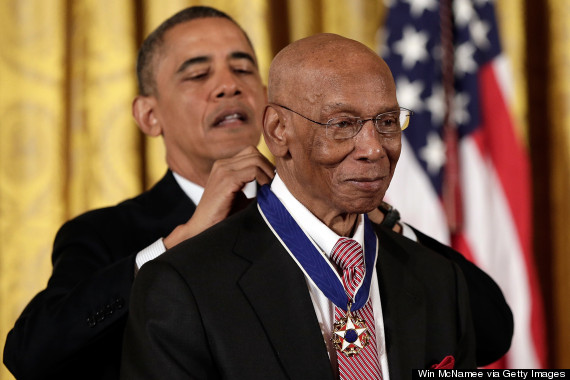 President Barack Obama awards the Presidential Medal of Freedom to Hall of Fame baseball player Ernie Banks in the East Room at the White House on November 20, 2013. (Getty) 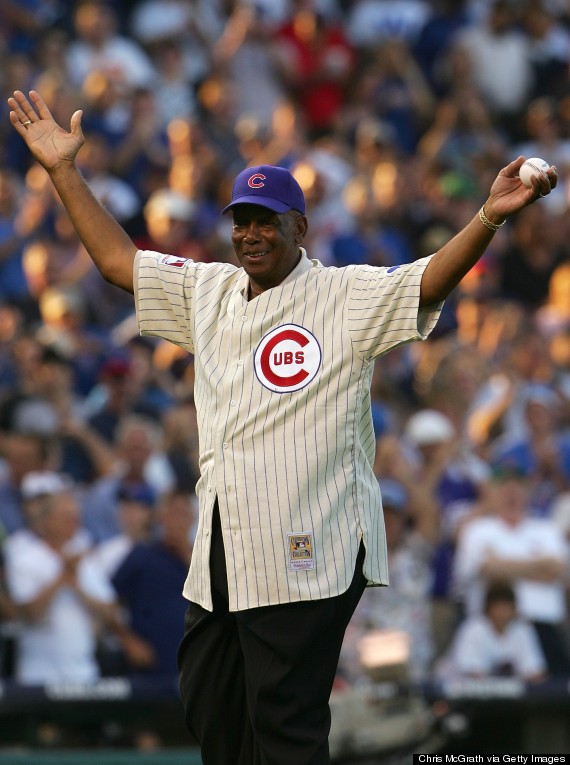 Ernie Banks acknowledges the fans prior to Game Three of the National League Divisional Series between the Chicago Cubs and the Arizona Diamondbacks at Wrigley Field on October 6, 2007 in Chicago, Illinois. (Getty) 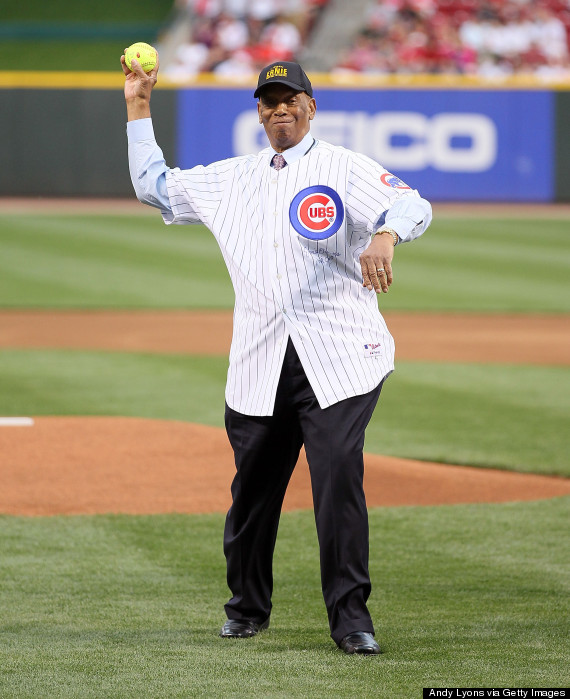 Ernie Banks throws out the first pitch before the game between the Cincinnati Reds and the St. Louis Cardinals at Great American Ball Park on May 15, 2010 in Cincinnati, Ohio. (Getty)

Words cannot express how important Ernie Banks will always be to the Chicago Cubs, the city of Chicago and Major League Baseball. He was one of the greatest players of all time. He was a pioneer in the major leagues. And and more importantly, he was the warmest and most sincere person I’ve ever known. Approachable, ever optimistic and kind hearted, Ernie Banks is and always will be Mr. Cub. My family and I grieve the loss of such a great and good-hearted man, but we look forward to celebrating Ernie’s life in the days ahead.

For ebullient Ernie Banks, day at the ballpark was a day in paradise http://t.co/4Zb9j7p1uh pic.twitter.com/57cBNpL5UW

Hall of Fame slugger Ernie Banks, the two-time MVP who never lost his boundless enthusiasm for baseball despite years of playing on losing Chicago Cubs teams, died Friday night. He was 83.

The Cubs announced Banks' death, but did not provide a cause.

"Mr. Cub" hit 512 home runs during his 19-year career, including five seasons with 40 or more. He was fond of saying, "It's a great day for baseball. Let's play two!" That remains a catchphrase at Wrigley Field to this day.

"Words cannot express how important Ernie Banks will always be to the Chicago Cubs, the city of Chicago and Major League Baseball. He was one of the greatest players of all time," Cubs chairman Tom Ricketts said in a statement. "He was a pioneer in the major leagues. And more importantly, he was the warmest and most sincere person I've ever known."

"Approachable, ever optimistic and kind hearted, Ernie Banks is and always will be Mr. Cub. My family and I grieve the loss of such a great and good-hearted man, but we look forward to celebrating Ernie's life in the days ahead."

Though he was an 11-time All-Star from 1953-71, Banks never reached the postseason, and the Cubs finished below .500 in all but six of his seasons. Still, he was inducted into the Hall of Fame in 1977, the first year he was eligible, and selected to baseball's All-Century team in 1999.

Banks' No. 14 was the first number retired by the Cubs, and hangs from the left-field foul pole at Wrigley Field.

"I'd like to get to the last game of the World Series at Wrigley Field and hit three homers," he once said. "That was what I always wanted to do."

Banks was playing for the Kansas City Monarchs of the Negro Leagues when the Cubs discovered him in 1953, and purchased his contract for $10,000. He made his major league debut at shortstop on Sept. 17 that year, and three days later hit his first home run.

Tall and thin, Banks didn't look like a typical power hitter. He looked even less so as he stood at the plate, holding his bat high and wiggling it as he waited for pitches. But he had strong wrists and a smooth, quick stroke, and he made hitting balls out of the park look effortless.

When he switched to a lighter bat before the 1955 season, his power quickly became apparent. He hit 44 homers that season, including three against the Pittsburgh Pirates on Aug. 4. His five grand slams that year established a major league record that stood for more than 30 years before Don Mattingly hit six in 1987.

Banks' best season came in 1958, when he hit .313 with 47 homers and 129 RBIs. Though the Cubs went 72-82 and finished sixth in the National League, Banks edged Willie Mays and Hank Aaron for his first MVP award. He was the first player from a losing team to win the NL MVP.

Banks won the MVP again in 1959, becoming the first NL player to win it in consecutive years, even though the Cubs had another dismal year. Banks hit .304 with 45 homers and a league-leading 143 RBIs.

Banks retired after the 1971 season. He owned most of the Cubs' career slugging records, some of which still stand today.

Known mostly for his power at the plate, Banks was a solid fielder, too. He is best known as a shortstop, where he won a Gold Glove in 1960, but he switched to first base in 1962. He played 1,259 games at first and 1,125 games at shortstop.

Born and raised in Dallas, Banks would be bribed to play catch by his father, who always wanted him to be a baseball player. Banks grew to love the game and was a standout in high school, along with participating in football, basketball and track and field.

He joined a barnstorming Negro Leagues team at 17 and was spotted by Cool Papa Bell, who signed him to the Monarchs in 1950. Banks played one season before going into the Army. He returned to Kansas City after he was discharged, playing one more season before joining the Cubs.