Ernie Els showed Adam Scott that there is nothing easy about winning a major championship. The 42-year-old South African overtook Scott down the stretch to win the 2012 British Open. Scott's collapse featured four straight bogeys to close out his fourth round at Royal Lytham.

Playing two groups ahead of Scott, Els birdied the 18th hole to finish at 2-under 68 for the round and 7-under par for the tournament. At that point, Scott still held a slim 1-stroke lead. Having quickly squandered that slim edge on 17, Scott needed to drain a 7-foot putt for par on 18 just to force a playoff. Using his long putter, he slid the shot beyond the cup, just skirting the edge. Leading by four strokes with four holes to play, Scott went bogey, bogey, bogey, bogey on his way to a heartbreaking defeat.

"I had it in my hands with four to go," said Scott in the aftermath of his loss, via Devil Ball Golf. "I'm very disappointed. I played so beautifully for most of the week."

The latest in Scott's string of bogeys meant that the man dubbed "The Big Easy" would lift the claret jug for the second time in his career. After shooting 64, 67, 68 in the first three rounds, respectively, Scott carded a 5-over 75 on Sunday. The 32-year-old Australian's search for a major title continues.

"I'm a little numb at the moment," said Els after his triumph, via Golfweek. "First of all, I feel for Adam Scott. He's a great friend of mind. Obviously, we both wanted to win very badly. But you know, that's the nature of the beast. That's why we're out here. You win, you lose."

The 2012 British Open is the fourth major title for Els, who won the U.S. Open in 1994 and 1997 as well as the 2002 Open Championship. After finishing up his third round tied for fifth at 5-under par, Els felt confident.

“For some reason I have some belief this week. I feel something can happen," Els told the Telegraph. "I’ve put in a lot of work and something good is going to happen and hopefully it’s tomorrow.”

From Els' perspective, something good certainly did happen on Sunday. For Scott, the conclusion at Royal Lytham was a disaster. Holding a four-stroke lead to begin the final round and managing to hold the field at arms' length despite a shaky start on Sunday, the Australian seemed poised to win the first major title of his career as he began the back nine. But things didn't quite go according to plan.

Scott's Sunday misadventures certainly proved the most costly but Tiger Woods and Brandt Snedeker also struggled in the fourth round. Woods, who began the day five strokes behind Scott, had his hopes of another major title dashed by a triple bogey at the sixth hole.

More From The Associated Press

LYTHAM ST. ANNES, England — Ernie Els has won his fourth major championship in an astonishing finish, rallying to beat Adam Scott in the British Open when the Aussie bogeyed the last four holes.

Scott pushed his lead back to the four strokes it was at the beginning of the round when he made birdie at the 14th hole. But Els birdied the 18th for a 2-under 68, then headed to the putting green hoping his score was good enough to get him in a playoff.

Turns out, it was good enough for the claret jug.

Scott missed a short putt at the 16th and drove into a fairway bunker at 18. After punching back in the fairway, the Aussie hit a brilliant iron to 7 feet. But the par putt slid by the cup. 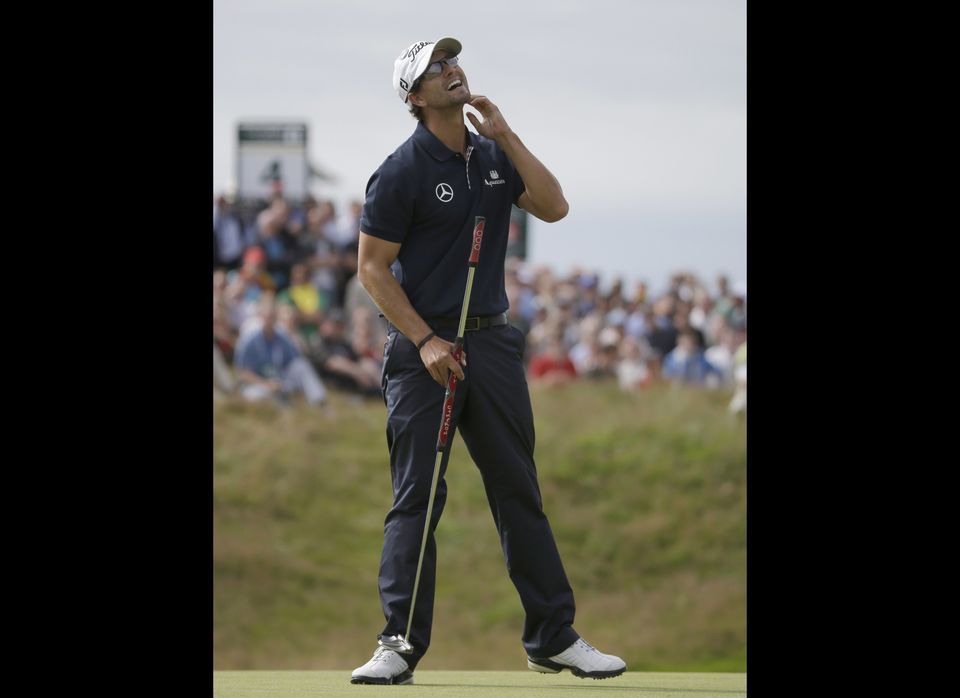