Tears rolled down a boy's face Monday as he held a sign of apology in front of his South Florida school.

Twelve-year-old Erol Faustin was suspended for three days after swearing at his teacher at Rickards Middle School when she asked him to move his bookbag, said his mother.

"He told her he doesn't give an 'F','B,'" explained Lisette Lopez. "Those words are not acceptable in my house. He's got a younger sister and brother that look up to him. He needs to be a role model."

Friends crowded around Faustin were "less than supportive," WPBF reported, but five children interviewed said they agreed with his mother's decision.

"He's definitely going to learn a lesson," opined one girl, while another suggested, "It's good that she did that." Another boy explained that he "completely agreed" with the mother: "Like, if your son is going to disrespect his teacher, I believe the only way you're going to get him to learn from his mistake is doing something that he won't forget."

The sign, which Erol held while wearing a suit and tie, read in part, "I disrespected my teacher...I would like to apologize, not only to that teacher, but to all adults." WSVN reports he was tasked with holding the message every day he was suspended when school let out.

Lopez told WSVN the boy's father has a criminal record, and she has tried long talks and even counseling to keep her son from following in his footsteps. The sign, she said, wasn't "for punishment."

Does mom know best? Signs as punishment have been cropping up all over, but consensus among experts seems to be that public humiliation can do more harm than good.

HuffPost senior columnist Lisa Belkin wrote about the trend this past spring. Alfie Kohn, author of "Unconditional Parenting: Moving from Rewards and Punishments to Love and Reason" told Belkin such disciplinary tactics can lead children to view parents as enforcers rather than someone they can trust.

Psychologist Jill Hunziker also told ABC news, "All it will do is produce more anger and resentment in the child."

PHOTO GALLERY
Signs That Kids Have Worn As Punishments
Download
Calling all HuffPost superfans!
Sign up for membership to become a founding member and help shape HuffPost's next chapter
Join HuffPost

Erol Faustin, 12, Holds Sign Outside Rickards Middle School After Swearing At Teacher (VIDEO)
Signs That Kids Have Worn As Punishments 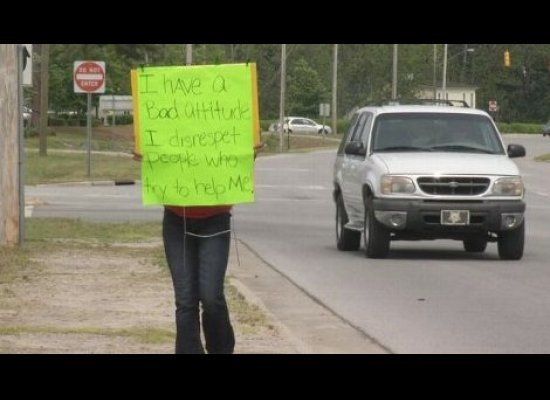 1 / 6
"I Have A Bad Attitude And I Disrespect People Who Try To Help Me"
<a href="https://www.huffpost.com/entry/donell-bryant-punishes-teen_n_1467774" target="_hplink">Donell Bryant </a>made his 15-year-old daughter, Quandria, sport a sign on the side of a North Carolina highway because she was becoming a "mean girl" who needed an attitude adjustment.
ABC