A 13-year-old boy sits hunched over a suspiciously gaudy magazine or a lurid, jerky video on a computer screen, furtive and flushed, sticky gobs of tissue in the wastebasket. It’s a familiar tableau: The traditional sexual explorations of a testosterone-clogged adolescent male.

Meanwhile, in a room of her own, another 13-year-old makes her own tentative sexual forays, but it’s not a familiar scene. She’s not “practice kissing” with her BFF or pushing off the roving hands of a too-old boyfriend or giggling about guys she’s totally crushing on. It’s just her, at her keyboard -- oh, and she's reading about the characters of her favorite book having acrobatic, highly noncanonical sex with each other.

Fan fiction -- stories about characters from existing published work, or even about real people (looking at you, One Direction) that are circulated among fans without being officially published -- is a genre little understood and much maligned by the mainstream, which could no longer ignore the form after the original Twilight fanfic Fifty Shades of Grey took the English-speaking world by storm. (To legally sell the books, author E.L. James had to change the characters of Bella and Edward to Anastasia and Christian.)

Mainstream discussions of X-rated fanfic usually veer toward the gleefully smug or the bemusedly grossed out. Like lists of "5 Ridiculous Works of Highbrow Erotic Fan Fiction," articles describing Fifty Shades and its fanfic peers as “the written word equivalent of taking two naked dolls and mashing them together to make what you think sex looks like when you're 10 years old,” round-ups that kick off with “All we have to say is: oof.” There's also the San Francisco reading series "Shipwreck," which solicits sexy scenes set in classic books from "great writers," then has them read aloud in front of an audience to roars of laughter; past shows are documented on a podcast.

Fan erotica can certainly be funny, intentionally or unintentionally, but the perpetual laugh track makes it difficult to understand why people are drawn to it, despite the ridicule.

Little solid research has been done on who writes and reads fan fiction, especially the huge subset of X-rated fanfic, but surveys and anecdata suggest the arena is dominated by girls and women, many of them queer, many of them young. There's no one type of person who writes and reads fanfic, however. Kiri Van Santen, Communications Co-chair for the fan collective Organization for Transformative Works, says she knows men and women of all ages who write fanfic. “I suspect that it is true that the majority of fanfic writers identify as women or girls,” she added, “but I don’t have data to support that."

To many in the fan writing community, however, the aspects of fanfic that can make it seem icky to outsiders are exactly those that allow readers to feel comfortable with the sexual content within. While boys are expected to sneak glances at porn or fantasize about feeling up their classmates’ boobs (boys will be boys, right?), girls have rarely been offered such a direct pathway into sexual self-discovery. It’s still far from simple for a girl to own her sexuality. But giving those urges to other people -- familiar characters from books or TV, members of their favorite musical group -- well, that feels less implicatory. In fanfic, girls can remain off-stage, able to glance sideways at their fantasies and desires without ever having to directly claim them.

The entire concept of fan fiction serves as a distancing technique, argued scholar Catherine Tosenberger when we spoke on the phone. “It can feel a bit less revealing,” she said. “If you put up original characters -- female writers routinely get asked, well this character is female, you’re a woman. Is this you?” If the character was already created by J.K. Rowling, the answer is a bit easier: No, clearly this is Hermione, a very specific woman who isn’t me!

The opportunity to displace these risky desires, not just into pseudonymous fictions, but onto fictional characters, makes fanfic a welcoming sexual space for girls and women, where they can safely spin their more illicit fantasies off into the minds and actions of distinctly separate alter-egos. “It made me much more comfortable in myself. More comfortable in my sexuality and going out to find other erotica and pornography without having to feel ashamed,” recalled Amy, 23, who lives in Portland and got into fan fiction early in high school. “These are characters, but they’re also people, they do normal people things and that includes sex and other sexual activities.”

For Kelly, 28, who lives in Sacramento, the existence of a community of writers creating fics about characters who shared her desires was vital; it was a parallel world in which her sexuality was treated as normal. She discovered fan fiction at around 13. “Reading about those characters and knowing that there were other people in the world who not only read about them too, but actually wrote about them in those ways, helped me gain a sense of confidence and strength in my own sexuality,” she told me.

The enormous popularity of slash fiction -- a term describing a gay pairing not established in the original text, such as Draco/Harry -- has frequently baffled outsiders and even fans who struggle to articulate their fascination. On many fan sites and forums, slash fics far outnumber het pairings. Much of it, like all fan fiction, is likely written by young women, most of whom, surveys suggest, are queer. But why? There’s no woman to be passionately adored in these scenes. “

If you think guys are hot!” exclaimed Tosenberger, laughing.

More importantly, slash can serve as another degree of separation between the fans and their sexual interests. Growing up, girls can be uncomfortably aware of their bodies as potential sexual objects, an anxiety that may not be solved by projecting onto female characters. Writing about sex between men may allow them to put aside their own insecurities and fears about sex and sexual judgment. “It’s a way of writing about sex without writing about girls,” pointed out Deborah L. Tolman, professor of psychology and social welfare at Hunter College and CUNY. “There’s still a minefield for girls to act on their desires, on their sexual feelings. Even though we say everyone can do everything, slut-shaming shows that’s certainly not the case.”

Luce, a blogger at Lady Geek Girl and Friends, quoted female slash fans who articulated just such a benefit to the genre: “Reading M/M is safe for me. I don’t want to identify as the sexual person involved,” one wrote on Tumblr.

Women are often socialized to simply want to be wanted. The premium on a woman being deemed desirable to men is so high that it is, frankly, often difficult for women to feel sexual without feeling safe in her desirability. When interviewing adolescents and teenagers for her research,  Tolman explained, “What I’m not hearing is a sense of entitlement to their own sexual feelings.” Instead, she said, “I hear a lot of girls talk about looking sexy as an aspect of feeling confident.”

While the results of this fictional experimentation might sound science-fictional rather than medically accurate, Tosenberger argues that what's important is "having space to explore their own sexuality in a way where … they aren’t going to get pregnant or get a disease. Who cares that that doesn’t sound like any penis that anybody has ever heard of?"

Hurt/comfort fics, a popular subset of stories, go a step further, showing a character heartbroken or victimized, then consoled by a strong, loving partner. “In erotic fic,” said Van Santen, who has been reading fanfic in her personal time for years, “that generally leads to banging.” For queer people and straight women, for whom violence, brutal rejection and vulnerability can often go hand-in-hand with romance, these fics choose not to eliminate these harsh realities, but to write alternative endings in which solace, and bliss, can be found even in the wake of disaster. As Van Santen puts it, she likes “a bit of creative violence in my sex scenes, as long as the violence is followed by snuggly aftercare."

At its heart, fanfic arises from a thirst for something lacking, whether it’s more tales featuring a reader’s favorite characters or a representation of her sexual interests that the mainstream media isn’t putting forward. “Historically and today,” explained Tosenberger, “fan fiction tends to be written by people who find themselves alienated by the texts, in some way, who find themselves outside the text’s preferred audience and push back.”

With teen literature, in particular, often beholden to business concerns and the need to reach a wide audience, there’s a self-censorship at play that leaves out marginalized experiences and those deemed inappropriate for younger readers, like sexual activity. “Many fetishes or kinks wouldn’t fit well with the themes in most YA books, but that doesn’t mean that teenagers who have those kinks should be made to feel deviant or ‘weird,’” Van Santen argued.

Fanfic doesn't exist in a vacuum, either; though writers can circumvent the patriarchal structure and sanitized standards of mainstream entertainment, the writers themselves still live in a society where men are often deemed more worthy of sexual agency -- some even believe this may have to do with the popularity of slash pairings, as white men typically form the most popular duos, even when the series protagonist is a woman or man of color. "Slash,” as Tosenberger told me a friend of hers likes to say, “is the sound of white men fucking.”

There's still so much we don't know about how young people are discovering sex today, Tolman emphasizes. "We do not know what it means to see sex before you have sexual experiences," she told me. "We do not know." Young women and teens, in particular, are bombarded with messages about how they should behave sexually, and they may simply carry those ideas into their own fantasy lives unless they're also thinking critically about what's expected from them sexually, what society is telling them about their sexuality, and what they actually want.

"I do think engagement with those questions from a critical perspective is a really important part of girls exploring the possibility of what sexuality can mean for them," said Tolman.

Still, there's a lot of reason to hope, based on what we do know, that marginalized young people who aren't being catered to by mainstream media are finding quiet empowerment in the form.

"One of the reasons fanfic is so dominated by women is because if you’re a straight white guy, all stories are for you," Tosenberger said. "With women, with queer folk, with people of color, you wind up scrounging for scraps." It's hard to know exactly what drives this odd community. Ultimately, we can theorize, guess, and extrapolate, but we don’t really know who most fanfic authors and readers are in their offline lives. And that’s exactly the point. 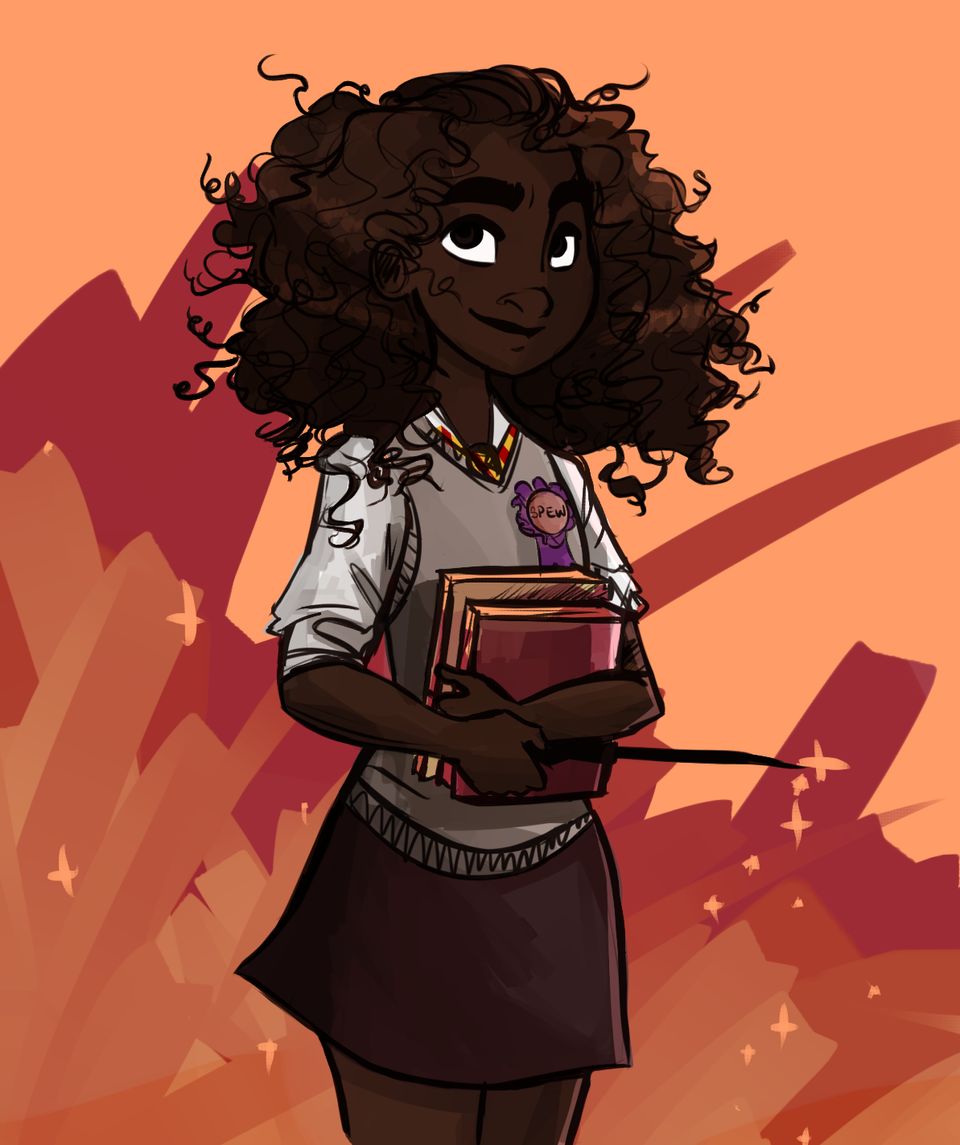