Which got me thinking. About a lot of things, but most importantly about what exactly are the differences between the two genres, since both were new for me. 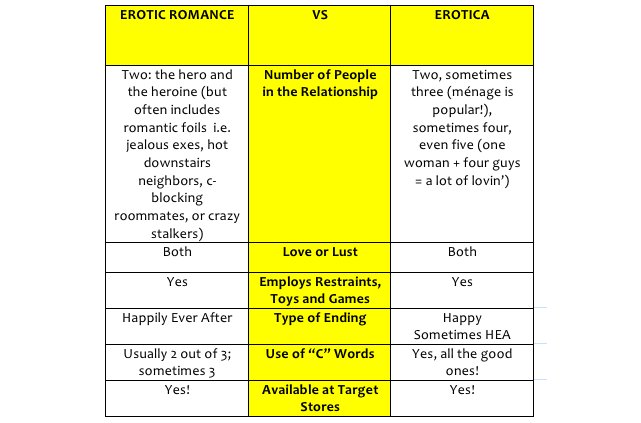 Two years later, the current bestseller lists are loaded with novels featuring vivid, detailed descriptions of all kinds of sex -- whether between people who are falling in love or who are just having a good time. From Scottish highlanders to futuristic CEOs, from art patrons to ex-military commandos, college students, perverted 19th century royals, and in my case, a devastatingly handsome Chicago billionaire gourmand, there's a hero for every mood and every preference. From heart-breaking love stories to titillating tales of sexual exploration, domination, submission, and everything in between, it's all out there, proud and readily available for purchase -- online but also in stores everywhere!

Personal tastes regarding sexy novels are just that: personal. One woman's Sunday poolside read is another woman's special book she keeps hidden in the back of her closet. Which means labels really don't matter that much; it's more about what you're into. What is important to keep in mind is that good authors write good books and don't limit themselves to "genre conventions."

I answered my girlfriends' probing questions about my foray into the erotic and then I asked them some in return. Most copped to reading Fifty Shades of Grey, but also to reading more recent releases that featured hot couples and very hot sex. And they liked them. A lot. Which was on par to saying they used to watch Law & Order reruns before bed, but recently upgraded their cable and now watched Cinemax After Dark. These were giggle-inducing reveals, from grown women. I am not sure I want to know the intimate details of my pals' very personal reading choices. But you can bet your lunch that I'll be checking out the contents of their shopping carts the next time I bump into one of them at Target.