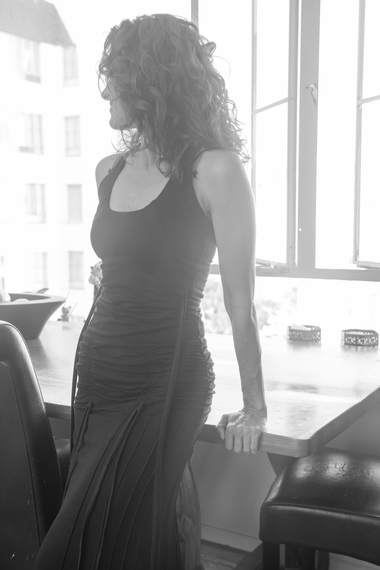 An older broad, with pronounced smile lines and breasts that have lost some of their fullness, and many miles of life experience.

Since I can't find a book like that, I've decided maybe I should write it myself. If I want to read about an older woman's sexual awakening, surely others would as well?

Not long ago, I happened upon a thread in my Facebook feed debating the appeal of just such a book. The consensus was that NO ONE would want to read about a mature woman having hot sex. Or any sex at all.

No one gets turned on by mature sex.

No one gets turned on by mature bodies.

So I downloaded Reiss's trilogy, Songs of Submission, onto my iPad and -- to my surprise -- was riveted, both by the train-on-the-tracks writing style and the self-love inducing sex scenes.

"I love to imagine I'd be able to handle a man like Jonathan [the sex god in her book series] at 25, but the fact is, he would have terrified me. I would have run for the hills. Imagine if I had been mature enough, though? I could have rewritten my life.

At least, that's the fantasy, but then I'd have to give up a man I love, and my children, and all the accomplishments I've earned. I wouldn't want to redo 25 any more than I'd want to be immature at 47.

What I love is the writing in Songs of Submission, which hurtles along, eschewing the meandering expository passages common to this genre for rat-a-tat-tat descriptions of frantic, kinky sex. She nails the consuming intensity of being ravaged -- constantly -- by a dominant lover, and the addictive, altered reality this experience creates.

A submissive fantasy is actually a fantasy about sexual power rather than weakness; the woman perceives herself to be so desirable that the man cannot resist or help himself. In the fantasy, the woman imagines enjoying submitting to the man's force, so it is done for her pleasure."

I know of only two books of erotica that feature women over 30. One is Joan Price's Ageless Erotica, an anthology of sexy stories penned by male and female writers to the right of fifty. It's a fantastic collection that conveys the changing nature of sexuality as we age.

The other, The Pearl Series, was recommended to me by Reiss. On her website, author Arianne Richmonde explains: "I wanted to write a romance about a real woman who'd had some knocks and bruises." So she created a main character who's a 40-year-old divorcee. I haven't read the book, so I can't vouch for it. While I'm glad the heroine's age begins with "4," 40 actually seems pretty young.

Given the size of the boomer population, I'd like to think that boomer erotica will join the elite club of Amazon top-sellers. I'd like to disprove the notion that no one wants to read about midlife women having torrid sex -- women who, after all, have a few decades of experience on the typical romantic heroine. I'd like to read about a 51-year-old divorcee who's having the best sex of her life.

Although that's more memoir than fiction.