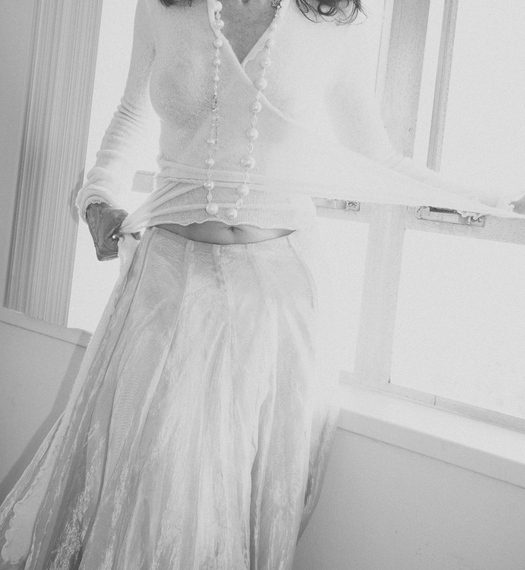 Last Sunday morning I laid in bed sipping hot coffee and gazing out my sun-streaked bedroom window. As I made my way to the bottom of my coffee mug, I thought about what makes some sexual experiences sexier than others. Sometimes it's the level of emotional intimacy. Sometimes it's the degree of novelty and risk. And sometimes it's just an exquisite blend of pheromones: a profound chemistry with someone who, at first glance, might not even be someone you would normally choose to be with.

One summer afternoon when I was nine years old, I was doing underwater somersaults in a friend's pool. When I came up for air, I saw my friend's older sister french-kissing her boyfriend. They were kissing beautifully, passionately, oblivious to the gawking string-bean treading water nearby. I heard moans and murmurs. I knew I was witnessing something private, and I should turn away, but I was mesmerized. Whatever they were doing, I wanted it. Maybe not now, but someday.

I grew up in a university town. Every year during graduation, high school kids would wall-vault their way onto campus, cavorting with drunken graduates and alumni during a three-day long bacchanal. The summer I was 16, I was desperately in love with a 15-year-old Adonis. Rumored to have lost his virginity at 13, he was a star athlete and a bad boy. We had had an ongoing flirtation, and that balmy night, we drifted from the pack. We stood in the middle of the quad, wondering where our friends had gone. I looked up to see him flashing his rogue smile as he drew me into him.

No one had ever kissed me like this. His lips and tongue moved expertly over mine, and I could feel that he was aroused as he pushed his pelvis against me. Lurching footsteps and peals of laughter swirled around us as we melted into each other in a sensuous embrace that I hoped would never end. I wasn't just turned on; I was transported. My body felt that it had merged with his. I had crossed over from garden-variety adolescent make-out sessions into an almost mystical realm of lust and tenderness.

We dated for a few weeks, but I wasn't ready to surrender my virginity. He took up with a girl who had already dispensed with hers, leaving me in a heartbroken heap.

The year after I graduated from college, I worked as a junior PR flak at a boutique agency. It was a bitter cold winter night when I trudged through the snow to the company Christmas party, which was held at my boss's brownstone. I was shivering when I arrived so I kept on my coat, a cape-like cascade of white Icelandic wool.

I stood at the beverage table ladling hot cider into a plastic cup when I noticed a gaggle of women fluttering around a young man. He had shaggy brown hair and wore a suit jacket with the sleeves rolled up. He leaned against the wall emanating sex appeal.

He turned his head and caught my eye, then walked over to where I was standing. He flipped his hair off his face and gave me a long, slow smile.

"That's a beautiful coat," he said. He ran his hands down my sleeve and a current of electricity shot up from my core.

"Thank you," I murmured, completely flustered by what was happening in my groin.

He reached for my cup. There was a spark as our fingers met. I felt that he was penetrating me as he held my gaze. Every pore on my body was throbbing when, unfortunately, my boss grabbed me by the shoulder to introduce me to a client.

My future husband held onto my cup. He smiled and told me he would keep it until I returned. Ten minutes later I zoomed back to the drink table. I looked all around the room. But he was gone.

I never saw him again, but I've never forgotten him either. It's not often a man can bring you almost to orgasm just by touching the tips of your fingers.

Victor was my neighbor, the first man I slept with when I separated from my husband. Our marriages ended at the same time and we kept bumping into each other, at Starbucks, at the grocery store, on angst-ridden walks through the neighborhood -- and then finally, in his bed.

The first time he took me from behind, I was standing with my palms pressed against the wall. I looked into the mirror above his dresser as he slowly rubbed his palm on my ass.

"Spank me," I heard myself groan, startling myself. How did I even know what to say? Who was this woman begging to be spanked?

But with that first hard smack on my ass, decades of generic sex washed away.

Talk Dirty To Me

Mike was the first man I met on OkCupid. I didn't feel attracted to him when we met, but his brazen sexual confidence changed that by the end of the first date. One night, he took me to an improv performance in Hollywood. A few minutes in, he leaned over and whispered into my ear all the things he planned on doing to me later that evening.

I gasped as my body started to tingle. He kept talking to me throughout the show -- I have no recollection what it was about. When we got back to his place, he made good on all of his promises.

We had sex for the first time in his living room. I was collapsed on his couch, ecstatically limp from his ministrations, when he stood up and slowly ripped open a condom wrapper. I gazed at him adoringly. A man with sexual prowess turns me into a 50s housewife in no time flat.

He glanced up at me, and spoke just three words, his calm voice gravelly from years of cigarettes.

I slid to the floor on my knees, then turned to face the couch. I could hear him padding across the carpet towards me.

"Put your head down," he said.

I placed my forehead on the couch. I needed no coaxing to step into my submissive persona. It had been inside me, perhaps always. Jesse just summoned it that day.

Joost was a silver-haired start-up guy, one of the smartest men I've ever met. He was also one of the most imperious, and I never felt completely comfortable with him. Except in bed. We had an explosive sexual chemistry that left me craving him between dates.

He'd just returned from a business trip abroad where he was extracting cash from various luminaries, when I stepped through his front door to greet him. He gasped as he saw me. His normal veneer of arrogance was gone. Never have I seen a man gaze at me with such desire and smitten-ness; he looked like a love-struck teenager.

Erica Jagger
Blogger, A Sexy Woman of A Certain Age