Along with notices about power outages, flooded subway tunnels, and gas shortages in the aftermath of Hurricane Sandy came this dispatch from Long Island:

Carrying or causing any item to be moved (ex: pushing, pulling, kicking, throwing, etc...) a distance of approx. 6 feet in an unenclosed area (such as a street or non-fenced- in lawn/backyard) is prohibited.

This notice was part of an announcement that the eruv in the Five Towns area would be "down" for the Jewish Sabbath. Though peculiar (can't carry a book more than six feet?), this notice relates to one of the most important aspects of Judaism: resting on the Sabbath. An eruv is a conceptual and physical enclosure around a Jewish community that allows its members to accomplish certain activities that Jewish law otherwise restricts on the Sabbath.

Yeshiva University Museum is currently presenting an exhibition, "It's a Thin Line," which I curated, on the eruv -- a topic that continues to amaze and confound our visitors, and, not least of all, me. Though the concept manifests in nearly invisible structures surrounding our neighborhoods and us, the exhibition's artifacts illustrate how much this topic affects Jewish life.

Included in the show are dozens of printed books and manuscripts; photographs of Jewish life in 19th- and 20th-century New York; railroad maps, postcards and schematics; confidential rabbinic debates and decrees; flyers both extolling and decrying those who establish eruvs in Brooklyn; films on the political and communal dimensions of eruvs across the tri-state area; and contemporary art works exploring the concept of eruv and its implementation in New York.

These objects and issues were the focus of a day-long symposium at Yeshiva University Museum this past October. The next day, Hurricane Sandy shuttered the museum for over two weeks, perhaps ironically leaving a slew of damaged eruvs in its wake.

Indeed, Hurricane Sandy disrupted many of our lives. For most of us, the storm was an inconvenience. For the Jewish communities who use the eruv, it was something else. Surely the absence of an eruv was a nuisance, one that abated in many communities within a few weeks following Sandy, though sometimes with small, temporary boundaries. In other places, the eruv will be down for months.

Some community leaders are taking this situation as an opportunity to remind themselves what life is like without an eruv. Others, however, are concerned about whether or not a generation of Orthodox Jews who have been brought up carrying on the Sabbath thanks to an eruv will remember to avoid carrying -- and thereby keep the Sabbath holy.

Of the varied forms of work that observant Jews avoid on the Sabbath, one of the most basic is carrying. Jewish law prohibits carrying any object outside of a private area to an open or public space. In other words, you can carry a glass of water around your living room, but not out of the front door.

This law poses obstacles to the fundamental ways we operate in the world, prohibiting the carrying of house keys, a cane or medication, or even an infant. Jews have developed ways around the law, such as belts and jewelry that incorporate keys. However, for many elderly and sick people, and especially for women and children, the proscription of carrying on the Sabbath symbolizes a virtual house arrest for 25 hours a week.

Rabbinic Judaism developed a solution about 1,800 years ago. Drawing from passages in Jeremiah and other parts of the Bible, Jewish sages in Roman Palestine came up with a the concept of an eruv, a symbolic border resembling a series of doorways (two uprights connected by a crossbeam), which mixes or fuses private spaces into one shared space by enclosing a neighborhood or a city.

Within an eruv enclosure observant Jews can carry keys, push a baby carriage or hold a baby, or bring food to someone's home. Moreover, an eruv makes it possible for observant Jews both to follow Sabbath laws and to enjoy the Sabbath, one of the requirements for correct Sabbath observance.

It can be easy to perceive the eruv as an eccentric, if not conceptually dubious, artifact of Judaism. A March 2011 story on "The Daily Show" about a proposed eruv in eastern Long Island defined the concept as coming from the Hebrew word for loophole, and as real (or imaginary) as Mr. Snuffleupagus. Yet, beyond that understandable reaction, the eruv embodies one of the most beautiful qualities of Judaism and Jewish history: how Jews have adapted the places in which they live to accommodate Sabbath practice.

The concept is central to Rabbinic Judaism, which dedicates one of the longest books in the Talmud to the topic. Eruv is one of the few concepts whose literature has its own visual culture. Printed discussions on eruvs feature dozens of distinct schematics that help the reader understand the complex descriptions of types of spaces appearing in the text.

Today, most Orthodox Jewish communities construct eruvs. These enclosures are usually made out of string or wire stretched on top of or on telephone or light poles. In the present, and historically, eruvs are virtually invisible, using existing structures in the landscape. From 1907-1952, the Third Avenue Elevated Train Tracks running the length of Manhattan, from South Ferry to Harlem, constituted the western border of the island's eruv.

In Roman Palestine, where most Jews lived around communal courtyards, an eruv made it possible to enjoy the Sabbath with their neighbors. Eruvs around Jewish neighborhoods in pre-modern towns in Europe allowed their residents to carry food from communal ovens, as well as spend the Sabbath together out of doors. As Jews migrated in the 19th and 20th centuries, they established eruvs that meshed with the emerging landscapes that they found in the increasingly complex cities in Europe and the United States. Like the 1907 Manhattan eruv, Jews in St. Louis and Odessa at the end of the 19th century "constructed" their eruv from new technological structures rising around them: telephone and telegraph wires.

Historically and presently, eruvs have revealed various religious, social and even economic schisms. Similar to Krakow in the 19th century, cities around the world have faced a series of challenges brought by municipalities around the right of a growing orthodox community to establish an eruv with public infrastructure.

Since the 1990s, a handful of non-Orthodox groups have fought the establishment of eruvs in Tenafly, N.J., and in the Hamptons based on worries that an influx of Orthodox Jews would change the local business landscape, skew the makeup of local schools and fuel a rise in real-estate prices by Jews seeking homes within an eruv.

I am personally not an eruv user, and, until this exhibition, knew little about the concept. A year after beginning work on this exhibition, a year spent immersed in the philosophical and social dimensions of eruvs, especially those in the Tri-State area, I find myself with a more nuanced regard of the centrality of the Sabbath for Orthodox Jews. More to the point, though, the eruv reveals something broader about Jewish tradition today: the Sabbath as an anchor for community; and the eruv vividly demonstrates the dynamism of Judaism through the Jews' steady re-interpretation and adaptation of their tradition in harmony with the world around them.

It's a Thin Line - The Eruv and Jewish Community in New York and Beyond from Yeshiva University Museum on Vimeo.

Zachary Paul Levine is Curator at Yeshiva University Museum, where he develops exhibitions and produces multimedia projects on Jewish culture and history. 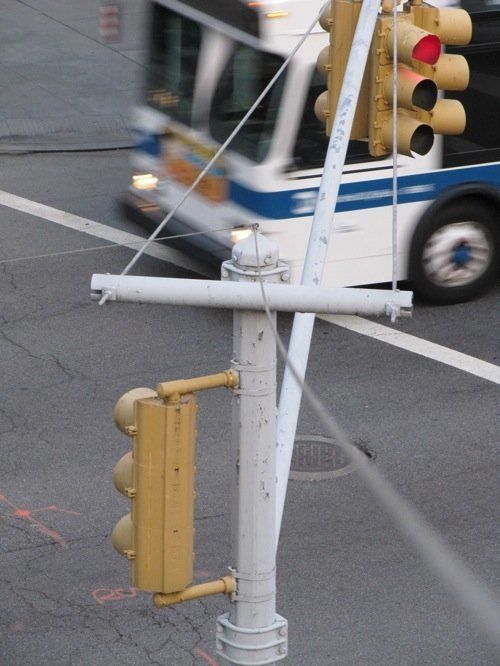 1 / 17
Eruv at Lincoln Square Synagogue
Though they frequently surround large geographic areas, eruvs are often indistinguishable from other parts of the local environment. It is likely that you live or work inside of an eruv, though you may never have seen or been aware of it. Eruv rope beside Lincoln Square Synagogue in Manhattan New York, 2012 Private Collection
Yeshiva University Museum