Two films in the genre of espionage thrillers, The Bourne Legacy and Skyfall, were released to popular acclaim in 2012. Each is the most recent offering in a series of movies about espionage. They are action movies noted for phenomenal chase scenes, violence, and beautiful women. The chief difference between the two is that the series about British MI6 agent James Bond, represented most recently by Skyfall, approaches the book and movie stories with tongue-in-cheek and humor. The Bourne series takes a more serious view of operations set against a classic struggle between Headquarters and Field Agent.

I was a career operations officer with the CIA, now long retired. I have seen firsthand how much these espionage thrillers have influenced public opinion about espionage as it's conducted by our government. When introduced as a former CIA officer, I find myself looked at as larger-than-life. Frequently, a new acquaintance will say, "I'd like to ask you to tell me what you really did for the CIA, but I know that you would then have to kill me." This is supposed to be funny, but it troubles me because it shows such a fundamental misunderstanding of what it's like to spend many years abroad in the service of the CIA. The family, public and not-so-public lives of CIA operations officers serving abroad are nothing like those portrayed in these and similar films. Please note that this criticism does not apply to the books and movies based on the work of British author John le Carré. In my opinion he comes the closest to "telling it like it is" among the authors who have made the genre popular.

For my first couple of years with the agency (or company, as it's sometimes called) I was a paramilitary officer serving in the Far East. I carried weapons. Never again did I carry weapons; I didn't even see weapons on assignments in Europe. This tidbit may disappoint some readers whose images of U.S. intelligence officers abroad have been formed by thriller books and movies, which are chock-full of shooting and explosions. In fact, the major goal of CIA operations officers abroad should be the collection of HUMINT, not shooting people while riding mopeds or driving fast cars through crowded major cities.

HUMINT is an acronym for human intelligence collection. This type of information gathering, which comes through developing relationships, is the most classic of all spying activities, and is said to rival prostitution as the world's oldest profession. Among other things it requires good language abilities, interpersonal skills that include social graces, a high level of tenacity, a tolerance for ambiguity, a certain amount of chutzpah, and lots and lots of stamina.

How come we need that old-fashioned stuff when we have so much modern technology like listening devices, satellite overhead photography, drones, etc.? Those assets have changed the nature of some intelligence collection such as infrastructure and disposition of troops. But they cannot gather such vital information as the intentions of a terrorist, plans being made by a shaky or hostile government, or the organization and personnel used for penetrating our most secret government establishments. HUMINT comes from face-to-face relationships carefully developed and nurtured by skilled operations officers. The likes of James Bond and Jason Bourne are often tasked with the retrieval of a secret box or stealing plans for a super-weapon (even our people do such things once in awhile), but the classic, difficult job of collecting human intelligence should always be in the forefront of the CIA's clandestine services abroad.

And now, back to the films. Given that an action film has to have action, and further, that chases of any kind are exciting for audiences, it seems to me that the producers have finally achieved the ridiculous. I was involved in surveillance both on foot and by car during my CIA career. If I had ever destroyed as many cars, motorcycles, sales booths and the like in Manila -- as we see done during a chase in The Bourne Legacy -- I would probably still be in a Philippine jail. The Chicago film critic Roger Ebert commented in his review of The Bourne Legacy that there are three chase scenes in the movie. Regarding the motorcycle chase, he says "The chase lasts way too long. I glanced twice at my watch." I checked my watch even more often. How much disbelief do the filmmakers expect us to suspend?

One thing our CIA operations officers share with James Bond and Jason Bourne is the feeling of tension between The Field and Headquarters. Whether you are a traveling salesman or an intelligence operative away from home base, it's difficult to get across the full scope of an operation to those back home who wield the power and write the checks. Despite some cynical views of others I'll stand my ground in saying that the differences between The Field and Headquarters in the real intelligence world of the U.S. Government do not rise to the level of killing our own rogue agents as has been portrayed in some books and films.

The need-to-know practice of secrecy in the intelligence world, coupled with intense security measures, have famously led to the CIA being unable to trumpet its successes. I have watched with sadness as our ability to keep things secret during the latter half of the 20th century was eroded. Because of this inability, I once lost the recruitment of an important source at the last minute. He failed to turn up at the meeting scheduled for him to sign on the dotted line. Only when I forced another meeting did he explain the reason for refusing further contact: The New York Times published an article on the day of our planned meeting, blowing a U.S. intelligence operation and naming names. He didn't want to read about himself in the U.S. press.

Experience with secrecy problems led me to include an example in my recent novel, Sasha Plotkin's Deceit. In this fiction piece a longtime CIA agent is brutally killed by the KGB during an operation in Moscow. He is the victim of information provided by a mole who has penetrated the CIA Soviet Operations Division. The loss of an operative this way is not a figment of my imagination. The CIA lost several assets in the Soviet Union as a result of the 1963 exposure of double agent Colonel Oleg Penkovski, an officer of the Soviet military intelligence agency, the GRU. He had been recruited and run by the CIA's British counterpart, MI6. Closer to home, the CIA lost many valuable information assets in the Soviet Union through KGB recruitment of an officer of their Soviet Operations Division, Aldrich Ames, who provided information to the Soviet KGB, including reports on CIA double agents operating in the Soviet Union. He operated from 1985 to 1993, and is said to have compromised more CIA double agents than any other rogue agent.

Challenges to keeping secrets have led to an admitted weakness on my part: I have a knee-jerk reaction against any belief in conspiracy theories. My colleagues and I used to joke about our government's classification of information when operations were blown by the media. We thought that SECRET should be used when one person has the information; CONFIDENTIAL might be appropriate when two people are in on the game; and a situation known by three people or more should be considered public information. Keeping the necessary secrets of a government conspiracy seems nearly impossible to me. I'm glad to have been proven wrong in the successful operation to kill Osama bin Laden. It was a huge accomplishment on the part of the administration and military that they were able to keep the plans under wraps until the hour of launch.

I hope no reader concludes that I don't like or recommend stories and films based on the writings of Ian Fleming and Robert Ludlum. They are very entertaining and well worth the time of a reader or film viewer. My hope is that those readers and viewers will accept these works as entertainment, and form their concepts of U.S. intelligence from more serious works. 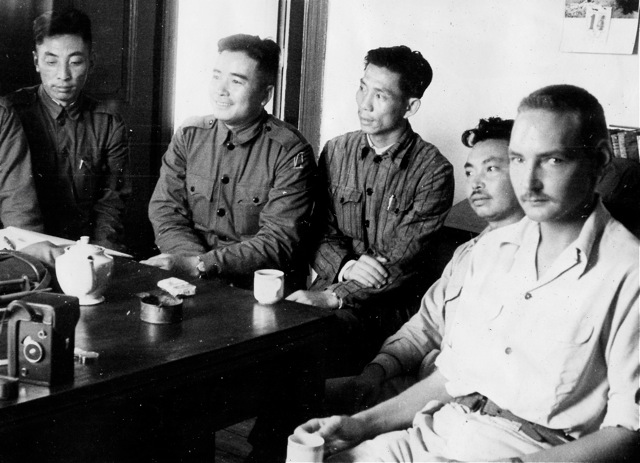 The author, right, in his Agency days, in a photo taken off the coast of China in 1954.

Former CIA officer Vaughn Sherman is the author of "Sasha Plotkin's Deceit," which can be purchased from Camel Press.