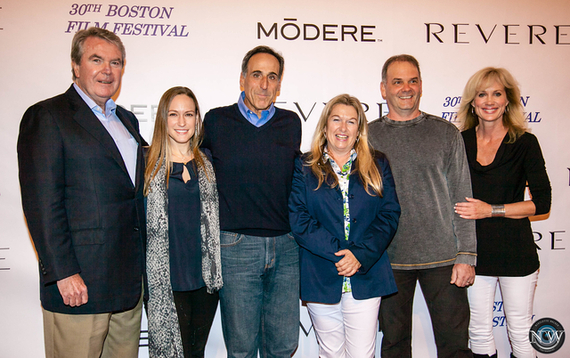 After years of obscurity, Jim Sweeney joins directors and more on Boston Film Festival's Red Carpet for the premiere of ESPN's 30 for 30 Playing for the Mob

When my husband and I approached the Revere Theater in Boston for a preview of ESPN's Playing for the Mob, we wondered if we'd stepped into a vacuum. Was this real life... or just a fantasy?

The question, borrowed from Queen's Bohemian Rhapsody, proved fitting. We were about to experience Playing for the Mob on the big screen, but as real characters in a real story. My role was minor, but my husband figured prominently.

Playing for the Mob captures an overdue coming out party between Goodfellas and Division I athletics on the pristine campus of a top Jesuit university.

For audiences, Playing for the Mob is entertainment. For my husband Jim Sweeney and me, the film returns memories of a chilling story, one that formed an unwitting backdrop to our lives.

For nearly 36 years, Jimmy's quietude -- initially mandated by the FBI and later self-imposed by his wariness of overzealous reporters -- fueled speculation: Did he or didn't he play architect in the Boston College points-for-dollars scheme?

But Jim Sweeney lived through it, all by the age of 23.

Jimmy's story predates the 1978 Boston College basketball fix around which the film centers. His was real life behind a fantasy.

Jim Sweeney was a freshman starter at BC. But by the time we met at the beginning of our sophomore year, he disclosed a chink: The newly installed coach was pressuring him to give up his scholarship.

I'd occasionally meet Jimmy following his afternoon practices and observed the hostile environment. But I was appalled one day as I witnessed the coach publicly belittle a player till he finally broke down in tears.

"Why do you put up with this?" I asked Jimmy later. "You should quit."

"I am on an athletic scholarship," he informed me. "If I don't play, I can't go to school. I want to play for BC and have no intention of playing anywhere else."

Jimmy dismissed my idea of bringing his concerns to BC's President Father Monan as "tattling". He would deal with the looming loss of his scholarship by hard work and strength of will.

Over time, Jimmy proved himself on the court. He gained in skill and prominence, but the sour undercurrent lingered between a coach who never wanted a player and an athlete who refused to go away.

Though publicly complimentary, the coach was notably absent when Jim Sweeney was awarded the enviable honor as the nation's top NCAA player under 6' at the Basketball Hall of Fame. 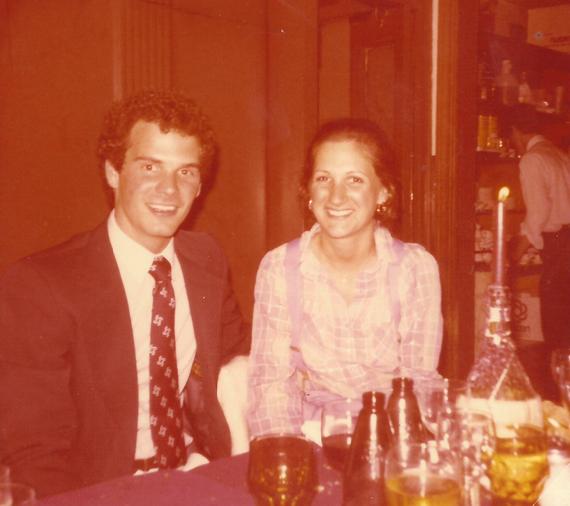 Jimmy and I graduated in 1980, married in the midst of the BC scandal and happily relocated to Florida in the Spring of 1983.

A cryptic phone call that first Florida winter, delivered from the coat closet of a NJ restaurant, warned me of a car heading South. An admonition to "make sure Jimmy doesn't come home tonight" was a tangible reminder of a dangerous past.

Our lives progressed like many others, but interests returned us to Boston years later. We were developing a sports entertainment property named MIKE and had a daughter attending Boston University. The city drew old worlds together and would ultimately expose an uneasy veneer that Boston College had held in place for years.

I remember thinking it odd that BC remained mute when the 1981 Sports Illustrated cover article described Jim Sweeney as a "bird of a feather" (like its story narrator, mobster Henry Hill). I chalked up the silence to BC's discomfort with an unintended scandal.

A much later visit to BC's Conte Forum, however, disturbed my sensibilities. Why would a Wall of Fame exclude mention of its three-time basketball captain? I reasoned the answer stemmed from an unfortunate, but defensible, decision: Jimmy failed to notify his coach about mob threats and was probably censured by NCAA rules.

Oddly, Teddy Kennedy proved my ultimate flashpoint. He catalyzed me to inquire into Boston College's assessment of its former student athlete Jim Sweeney and helped me uncover further displeasing revelations.

It was late August of 2009 when Ted Kennedy, last of an American political dynasty, passed away. I was in Boston helping our daughter get settled for the semester and took a walk to watch the late senator's historic funeral procession. Returning to Kenmore Square, my cell phone rang with news from a BC alum.

Father Monan presided over the Kennedy funeral. On-air banners advised TV viewers of the close and lengthy relationship between the late U.S. senator and the Boston College community.

Really? The imagery transported me into a personal Twilight Zone.

How did a this US Senator with such a controversial past qualify for public endorsement from BC?

Did the late senator's ties to Harvard, family wealth and the White House grant him privilege over a student athlete like Jim Sweeney whose working class dad drove a truck?

Was BC turning elitist at the expense of its more vulnerable students?

As a BC alum and wife of Jim Sweeney, I was purposed to seek some answers.

I began with a phone call to Father Monan who didn't remember me but quickly recalled Jimmy. I advised him that news of Ted Kennedy's funeral left me tossing in bed for weeks. Would he promise to read my letter if I took the time to write?

"You need to unburden yourself?" he offered kindly.

Father Monan gave me his address and said he'd look forward to receiving the letter.

The idea of unburdening myself may have translated differently from what Father Monan anticipated. Rather than delivering a painful confession about Jim Sweeney, I instead questioned BC's values, ethics and social conscience.

Further, I asked what the university was doing to protect its current athletes from predatory gambling threats.

I never heard back from Father Monan but asked to meet him the following Spring when visiting Boston for a sports summit at MIT. He obliged me, with an understanding that he was no longer BC's President and, presumably, no longer in authority.

Our near one hour meeting began and ended pleasantly, but disclosed the facts that Boston College believed Jim Sweeney actively pursued the mob in a point-fixing scheme ("They didn't come to him, he went to see them."). Additionally, Jim Sweeney harbored a drug dependency or, at the very least, was of a socially deficient nature ("I'm glad he made it" and "I'm glad he had you to help him keep it together.").

The motives and inferences describing Jim Sweeney proved as confounding as they were phantasmagorical. Was Father Monan describing the same man I'd been living with all these years?

I asked Father Monan if he wished to phone Jimmy now and query him personally about events of that 1978-79 basketball season. He physically recoiled at the suggestion.

I also asked if Boston College ever contacted any of the other players involved in the scandal. Did the University want to know if they missed something that could be of value for the future? And had the University installed any new oversights to protect current athletes from being ensnared by gambling forces?

The response to every question was no.

As to justifying his close relationship with the controversial Ted Kennedy, Father Monan informed me that the late senator had been a "daily communicant". According to religious doctrine, the regular ingestion of communion maintains a Catholic's good standing.

I was incredulous when we concluded our meeting: stupefied by Father Monan's desire to remain ignorant and remorseful of students who could easily become BC's future damaged goods.

Space does not allow for the additional and escalating pieces of registered correspondence I forwarded to BC's current President William Leahy who has continued along his predecessor's path.

Instead of seeking exoneration, I challenged BC to publicly acknowledge its unofficial position that the former student athlete Jim Sweeney played mastermind to the 1978-79 basketball fix.

This past February, I got to introduce myself personally to BC's current President following an alumni mass in Naples, Florida.

Father William Leahy had just delivered an inspiring homily about building bridges and I happily took his message to heart.

"Hello, Father Leahy," I said, extending my hand and business card to greet him. "I'm Jim Sweeney's wife Maura and I'm coming to you as a bridge."

Father Leahy mumbled weakly, awkwardly attempted to return my card and then quickly scooted away.

The next day, I mailed him another letter. 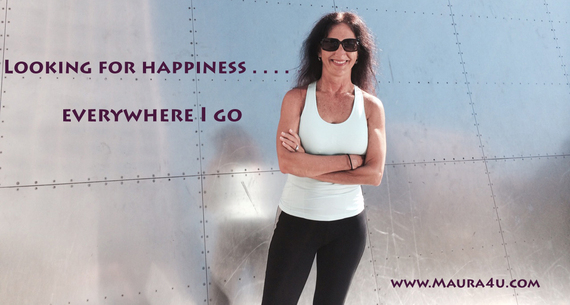