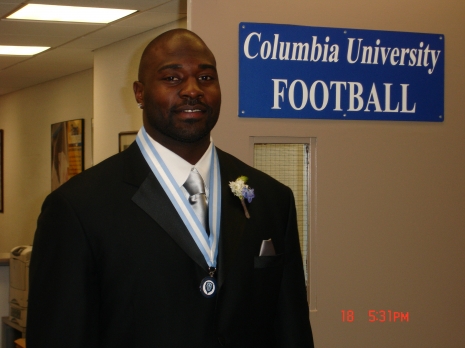 The Compton-born, Ivy-League graduate, retired NFL-All Pro Defensive End, co-host of ABC show Winners Bracket, ESPN Football Analyst has been a refreshingly candid and intelligent voice on a range of professional sports issues, most notably gun ownership. He minces no words in our conversation below.

I have three words for you: chronic traumatic encephalopathy. What can you say about that?

Well, with Chris Henry's death I heard he was diagnosed with that -- CTE. I've heard of over 50 former players who have had unusual circumstances related to their deaths and were also victims of CTE. It is something of a conversation amongst my circle in a sense that we wonder are we victims of the same thing. What are the symptoms? I think a lot more needs to be known about it. Because if we played under conditions which led to that, obviously we want to be abreast of it and well-informed.

Chris Henry is the first player reported to have CTE while he was playing but he did not know.

Football is such a violent game. Part of the culture is to tough it out and play through injury. Sometimes that means you can go further then you even know. You can ignore things that are obvious symptoms which would tell the common person to go to the doctor's office but as a football player you may just walk around and this "this is part of the game." I don't know the symptoms of CTE but it needs to be addresses and answered in a widespread manner.

Whatever is found out, given the violent nature of football, what can we possibly do about it?

First of all figure out what are the causes. I don't know enough about it but obviously there must be some linkage to sports where there are collisions.

I think the cause is fairly established: It's repeated hits on the head.

Yeah, that's the assumption I was under. What can you do about it? There is some small fine print in the contract in life you sign when you say you want to play professional football, and I think that's just part of it. Better technology with the helmets, safer techniques in tackling... but we kind of know what we are signing onto. It's kind of unfortunate that we get to this point where there is CTE even while you play but other than those two safeguards I don't know what else they can do because guys are still going to go out there and bang.

That is a very honest response. Thank you. You've always had very thought-out and intelligent responses on a lot of issues. What writers/sportswriters do you read?

Sam Farmer, L.A. Times. I really like his work. Peter King, I like his work. Skip Bayless, I love his work on the air. I'm just a big believer in expression, well thought-out opinions. And stay singular in voice. I don't like people that just give sound bites, cliche or stay politically correct. Tell the truth, especially if you have experience. Translate that to the fans. Translate that to the viewers -- the true essence of what you're speaking about.

In high school, you probably had scouts knocking down your door. What made you choose an Ivy League school, not to mention the Ivy League football doormat Columbia?

Ha! I love it: "the doormat." Well the doormat is an important part of your home because it's the first thing you step on. It's an introduction the beautiful home. But seriously, the education is second to none. You just can't look past that element. And I wish more student athletes were thinking more about their academics and athletics. I think it's slanted toward the athletics. I was thinking about having a great insurance policy just in case football didn't work out. Whatever happened with football I was going to have a great piece of paper -- a great diploma -- to fall back on. Also, going to New York and playing on a team that was considered the doormat of the league, it was a big fish in a small pond syndrome, and I was thinking if I go here and play well the sky is the limit for getting attention because it will be done in the media capital of the world, so who knows maybe someone could discover me easier. It worked out. I got the best of both worlds. I got a great education, got to play football and ultimately became a professional football player.

I teach at the NYU Sports Management program, and my friend and colleague professor Bob Boland played Columbia Lions football in the '80s. How often did they invoke his legacy in halftime pep talks?

(uproarious laughter) I can't say much, man. And don't blame it on CTE.

Barack Obama went to Columbia. He's always chirping about changing the BCS, wearing a White Sox cap, but where's his loyalty to the Columbia Lions?

You're right, I wish he would pick up his talk about Columbia because I think we get lost in the sandwich of Occidental and Harvard. A lot is not mentioned about Columbia. But I think it's fairly obvious his intelligence comes from being a Lion.

During your Columbia days, hanging out on the Upper West Side, how many time did you get thrown out of West End?

You know the area well. I never got thrown out of the West End partly because I didn't have enough money to buy enough alcohol to get me to point where I would get thrown out. I was pretty broke. Also I didn't hang out much off campus. Between football schedule and academic schedule I didn't have much social time. But I remember Canon's which is not there anymore and Sigma Chai the fraternity house. I woke up a morning or two there underneath the pool table not knowing really how I got underneath the pool table.

In your heyday as a Columbia collegiate, how many slices of Koronet Pizza could you eat?

Now we're talking. In my heyday? I'd say like two and a half. I'm talking about when they were 99 cents and one slice was like half a pie. And people have no idea the size of these slices. They were huge. I still tell those stories. I can still remember it like yesterday. In those days you could go to the Citibank, get $10 out the ATM man and go to Koronet and load up on a few slices. It was the perfect date night.

How much did living in NYC influence who you are now?

Tremendous amount. You rub elbows with so many different cultures and ethnicities. You truly learn a tolerance that I don't think a lot of people get to experience. You get it at a great age where you are coming into your own, but you respect that you still have a lot to learn. You also learn how to articulate your voice in respect to others. You learn about how people view you and perceptions and how to use that to your advantage and respect how you approach different people in different situations. I am a big football player from Compton, California, and next door to me is small young lady from Tennessee and next to her a young man from Bangladesh. I'm listening to rap. She's listening to country. How do all respect each other's difference and learn about each other's similarities? That was the best part of it. In the melting pot, you learn your ingredients and their ingredients and learn how to make something great from it.

Manhattan's Upper West Side is a pretty open, melting pot. And the NFL brings together a lot of different people. When do you think we will see an the first active gay NFL player?

Wow! I was just pondering this question a couple weeks ago when I was discussing one of my former teammates Esera Tuaolo who came out after retirement and said he was gay. Quiet as it was kept, it was suspected when we were teammates in Buffalo, but never to the point where there was any hatred for him as a person -- more a joke, more a comedy that people used to say stuff to him. I never thought twice about it until he retired and came out. Then I was like "Wow, they used to kind of make mention of that in the locker room." It would really be tough for a gay guy in the NFL, for the locker room to understand him as a homosexual -- I'm not saying it's impossible to pull off, but I'm saying right now the fear of coming out of the closet and more so coming out in the locker room would really be too tremendous to overcome. It's unfortunate because it shouldn't be that way. I understand that the locker room is pretty intimate. I do understand that there are 53 guys walking around nude at times and I do understand how guys may feel uncomfortable, but I don't think that it should impair someone's decision to live their life, have their freedoms and express themselves. I don't know whether that will be five, ten or twenty years from now but right now the NFL culture has no tolerance toward it.

How about your little secret? You were the 1988 National typewriting champion notching 82 words per minute. Could you explain that to me?

I took an elective class in typewriting thinking about it as an easy grade. A few weeks into he course, I thought this would be a great skill I am learning. I'm thinking in the future I will save time writing papers. I took to it. Then midway through the semester people were typing 40-words per minute and that was like the max-out point. But I was going around the neighborhood and visualizing typing words every time I saw a stop sign or street sign or a store front. I would type it out in my head using my fingers, and next thing you know I am typing 80-words a minute. That turned into a contest and that turned into me winning a national typewriting championship. I probably took it more seriously that anyone else did back in those days.

Last thing Marcellus, and I really love this about you: We share the birthday! What have you found to be the advantages about born on November 30?

We're just after Thanksgiving and start off the Christmas season. I never lost out on the gifts because of that. I also hear being a Sagittarius means lots of personality, great guy to know but tough to be married to him.