Esquire.com made a most unfortunate 9/11 mistake on Wednesday, the 12th anniversary of the attack on the Twin Towers.

The website placed Richard Drew's photo of a man falling from the World Trade Center next to a headline that read "Make Your Commute More Stylish." 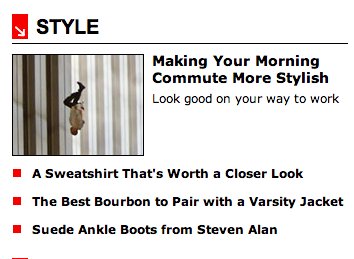 The photo was profiled by Tom Junod for the magazine's September 2003 issue.

The website addressed the mistake somewhat sourly on Wednesday, tweeting:

Relax, everybody. There was a stupid technical glitch on our "Falling Man" story and it was fixed asap. We're sorry for the confusion.

That response only stoked some people's outrage. "The inappropriateness of this post demands more than a 'relax," one person tweeted. Another person wrote, "Relax? Tell that to the families of my brother officers, you insensitive pricks!!!!"