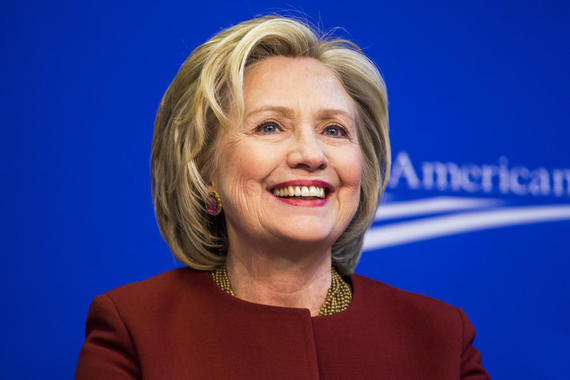 The win gave the candidate approximately 139 of the 2,383 delegates needed to secure her party's nomination for President, with her opponent getting exponentially less -- 106. CNN's Wolf Blitzer noted that the candidate's margin of victory, 15 points, was "almost as much" as the 35-point victory won by Donald Trump over John Kasich in the GOP nominating contest being held simultaneously in the same state.

Her opponent, who'd previously won his own home state by just 72.5 points, had in that contest netted only 16 pledged delegates -- a mere fraction of the 29 netted by Tuesday's winner in a state with 16 times the population of his own.

Experts also noted the impressive performance by Tuesday's winner on the county level, where she carried 12 of her home state's 62 counties, with her opponent carrying only 50. Having secured approximately 57.5 percent of the vote in her home state, she was also, experts agreed, highly likely to get the 66 percent of remaining delegates that she'll need to reach 2,383 "pledged" delegates and avoid an open party convention. Experts further agreed that an open convention in Philadelphia this summer would only emphasize perceived "flaws" in the party's nominating process and regulations, and would therefore be avoided.

Speaking to her supporters after the 15-point victory, the candidate, who has the support of 92.4 percent of the elected officials in her party, pointed out that a final and complete victory in her ten-year effort to secure her party's presidential nomination was nearly at hand.

The candidate's victory in this year's nominating process was first projected by nearly all national media outlets in late 2014.

After spending $4 million in advertising to win the state she represented in the United States Senate for eight years, the 2008 and now 2016 presidential candidate, riding the wave of an impressive 1.2-point edge in national polling over her opponent, spoke in eloquent terms of using cautious incrementalism to fix a bevy of intractable systemic abscesses in her nation's political, cultural, and economic life.

Her opponent, a 74-old Independent socialist without a super-PAC or five-day wardrobe, was only able to muster about 42.5 percent of the vote in the state his opponent lives and works in full-time.

Experts estimate that even if 126,000 younger, infrequent, and first-time voters had not been accidentally purged from the state's voter rolls, and even if independent voters -- approximately 30 percent of the state's voting population -- had been allowed to vote, the unruly-haired Jewish candidate from a state with a few hundred thousand residents would only have secured 47 or 48 percent of the vote in the state of 8.5 million residents he lost on Tuesday.

Exit polls suggesting a 52 percent to 48 percent race in the "closed" primary -- a primary restricted to members of the political party the winning candidate began raising millions of dollars for well prior to starting her run for President a decade ago -- were dismissed as only a reflection of how voters who headed to the polls on Tuesday intended to vote.

Addressing concerns about exit-poll disparities and voter-roll purges from a smattering of malcontents, experts agreed on Tuesday that voting is rightly adjudged an "aspirational" act; because mass voter-roll purgings and regulations disallowing citizens from registering with a party within six months of an election are commonplace, what matters is not what voters aspire to but what political parties decide is appropriate for them, experts said.

As Tuesday's winner reached the latter stages of her victory speech, she briefly discussed her recent accusation that her opponent doesn't care about the mass murder of children, which, experts largely agreed, was not a personal attack on her opponent but an exercise in observational dialectics. As she discussed her earlier comments, a single, poll-tested tear came close to appearing in the corner of her left eye.

In all, the candidate's victory speech lasted some fifteen minutes and, experts agree, effectively ended her party's presidential nomination process.

Earlier in the evening, CNN had played a sixty-second clip from her opponent's Tuesday-night speech, with panel moderator and political analyst Erin Burnett commenting on it thereafter, "Oh, are we back? David Axelrod, can Trump get enough delegates tonight to revive his hopes of reaching 1,237 prior to Cleveland?"

Several minutes later, Jake Tapper of CNN, who had previously referred to Tuesday's winner as her party's "presumptive nominee" in June of 2015, repeated the observation.