Esteban Barriga told his mother that he wasn't going to his prom because he didn't have any friends.

The 17-year-old senior from Maynard, Mass., has autism and felt alone at school, according to the Boston Globe. But, he eventually changed his mind about the dance -- and he's asked Ellen DeGeneres to be his date.

After learning about Barriga's mission, his classmates -- the friends he didn't think he had -- decided to help out. They wrote the reasons Ellen should respond to Barriga on a classroom whiteboard: 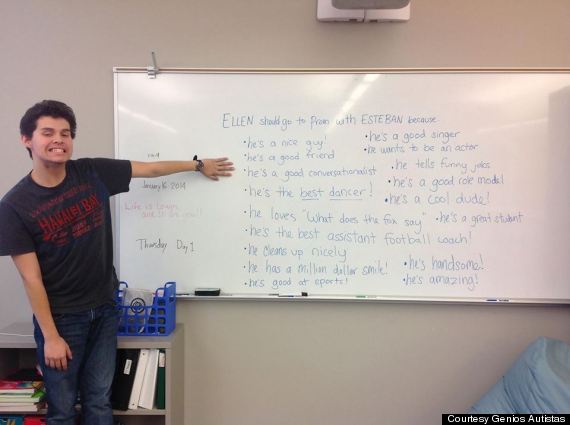 His family also helped him make the YouTube video above to convince the TV host to accompany him on May 9.

"As he prepares to transition to adulthood he teaches us a very important lesson," the description on YouTube reads. "That having a disability does not stop you from dreaming."

Barriga's supporters have since been writing on Ellen's Facebook page and started using the hashtags #EllenTakeMeToMyProm and #SayYesToEsteban on Twitter.

"It’s been an unbelievable experience because here’s this kid who thought he had no friends at high school, who thought he was on his own," Maribel Rueda, Barriga's mother, told the Globe. "Now he’s suddenly the most popular kid in school."

We're pulling for you, Esteban!

Teen With Autism Asks Ellen To Prom With The Help Of Friends He Didn't Know He Had
People Receive The Best News Ever
1 / 15
World War II Savior Reunited With Children He Rescued
This BBC TV show "That's Life" that aired in 1988 connected Sir Nicholas Winton with some of the lives he saved during World War II. In an operation called <a href="http://storify.com/storyvault/the-c" target="_hplink">Czech Kindertransport</a> Winton organized the rescue and safe passage of about 669 Jewish children who were designated for transport to Nazi concentration camps. In the clip, one of the children, Vera Gissing, embraces Winton and thanks him for saving her life.