Derek Walter and Steve Jenkins used to have fairly ordinary lives before a 530-pound pig named Esther moved into their house.

Walter is a real estate agent and bagpipe player; Jenkins is a professional magician. They're in the suburbs about 45 minutes outside Toronto, living in a 1,000-square foot house with a modest yard; it's perfect for keeping their two cats and two rescue dogs. Until two years ago, they ate a lot of bacon.

"We were pretty typical people," says Jenkins. "We were two totally normal, meat-eating omnivores who because of a Facebook message from a high school friend met and fell in love with a pig that changed our lives." 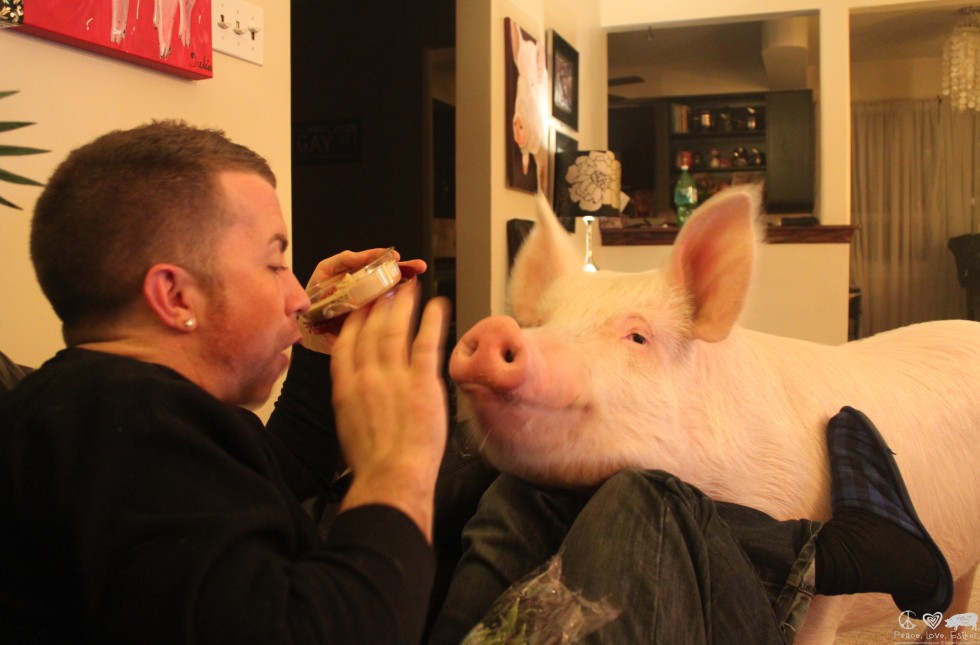 The message came, at the end of the summer of 2012, from a high school friend whom Jenkins hadn't seen in more than a decade. She said she had a "mini-pig but it was causing chaos at home," he says. "She had newborn twins and a dog that was not accepting the pig at all so it had to go. She said she remembered I was always an animal lover so I came to mind as someone who might be able to help."

He was. Within a couple of days, and without the immediate consent of his partner, Jenkins had brought home the supposedly six-month-old animal, who wasn't supposed to get to be more than about 70 pounds. 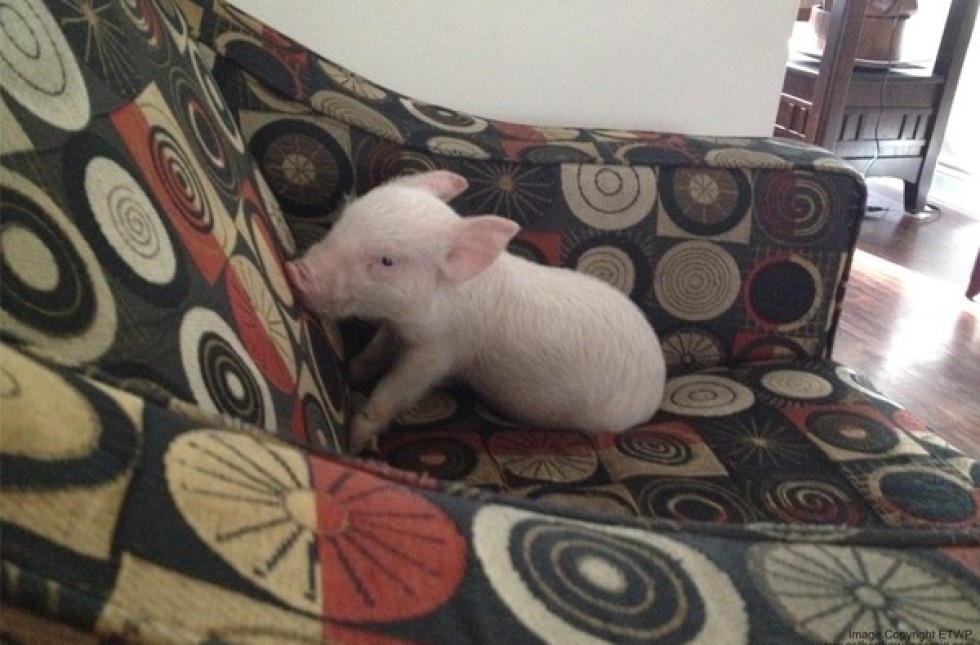 "Our vet raised concerns the first time he met her. He noticed her cropped tail and said it was a clear sign she was actually a commercial pig, not a pet at all. We were terrified but we had already fallen in love with her," says Jenkins. "We decided to wait and see what happened. But the longer we had her, the more we loved her -- and, unfortunately, the bigger she got."

Within about eight months Esther was near 170 pounds. As of last week, she weighed in at over a quarter ton -- and Jenkins and Walter aren't sure if their beloved, already massive pink girl is done growing or not.

Of course as she's gotten physically bigger, this unexpectedly huge house pet's role in the couple's lives has also expanded. Inspired by Esther, they've stopped eating meat, and have become animal welfare advocates. (Their "Esther the Wonder Pig" Facebook page, where they do some of this advocacy -- as well as share "Esther-approved" vegan recipes and videos of Esther doing things like getting a bath -- has almost 140,000 likes.)

Closer to home -- or, rather, literally inside the home -- they had to make some other changes.

"All food is in upper cabinets, doors locked, etc.," says Jenkins. "She loves to wrestle and play with toys, she comes to cuddle and loves to get belly rubs. She is very much like a big dog, just super smart. Smart enough to open closed doors and cupboards. It's amazing."

It's also amazing to see what Esther looks like on the family's couch: 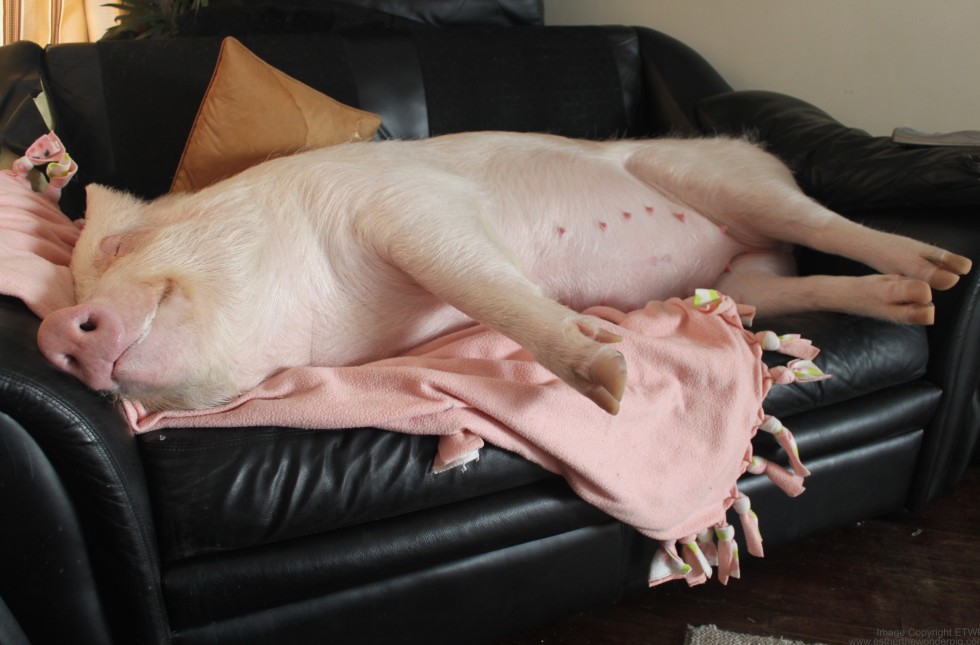 And here's Esther on the king-sized bed, where she spends a lot of her day -- though Jenkins says she retires to her own twin bed on the floor of the living room at night: 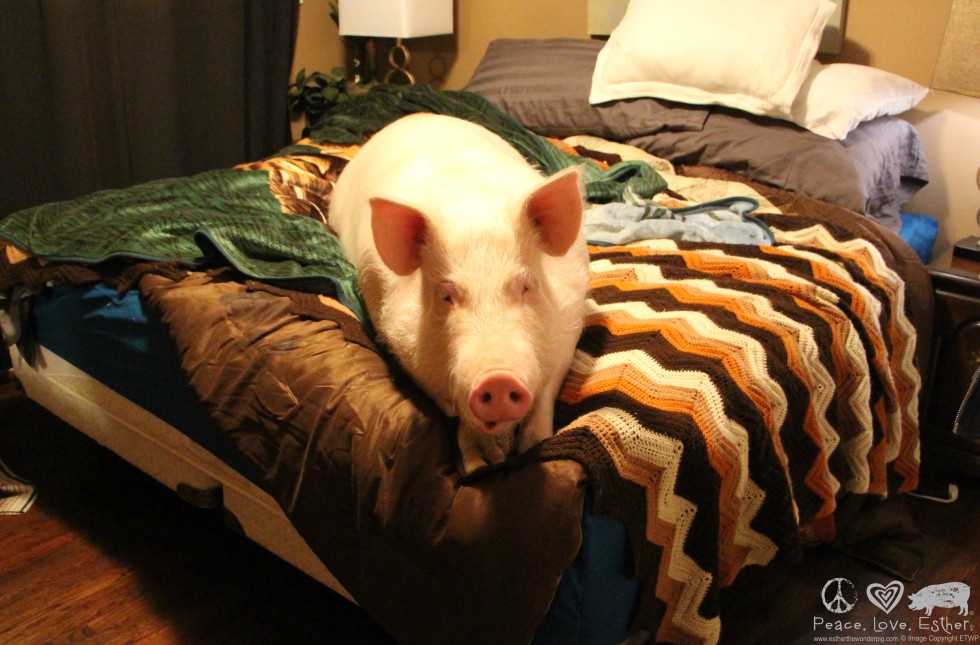 When she isn't hunkering down with the dogs, that is: 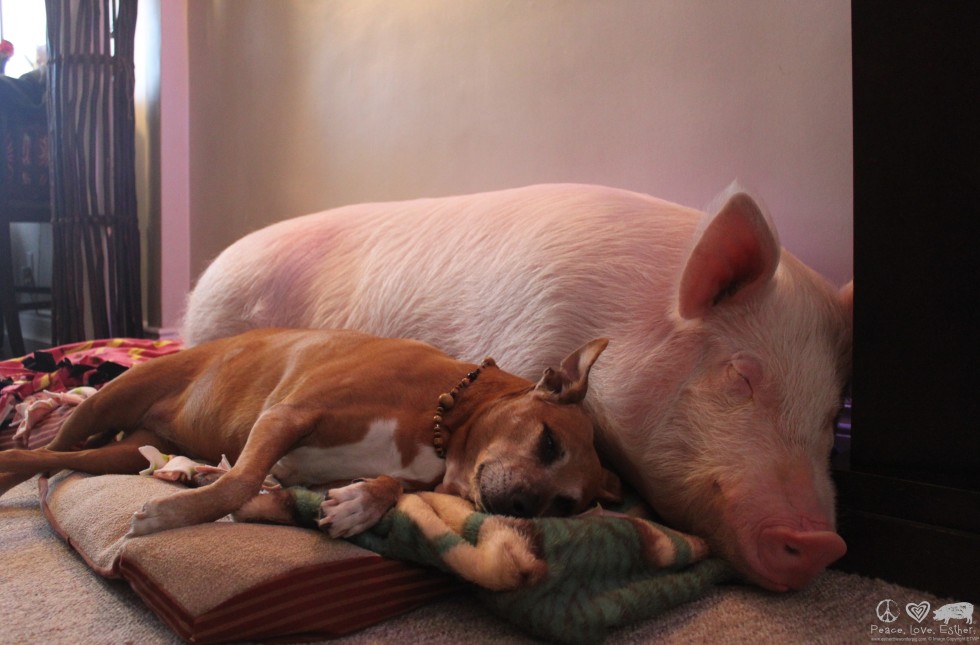 Speaking of the dogs, Jenkins says that Esther is part of their pack -- she's in the middle, able to steal food from one but not the other -- but the canines stopped horsing around with their porcine sister once she topped a couple hundred pounds. Jenkins and Walter have also stopped taking their pig for car rides, or walking her on the street, out of concern they'd be unsafe to distracted drivers, and possibly to themselves.

"If she was ever to get startled or want to run, lets be honest, there's not much we could do to hold her back," says Jenkins. "So we haven't taken her out for an actual walk since fall of 2013. With any luck we'll be on a farm very soon and we can walk with her again." 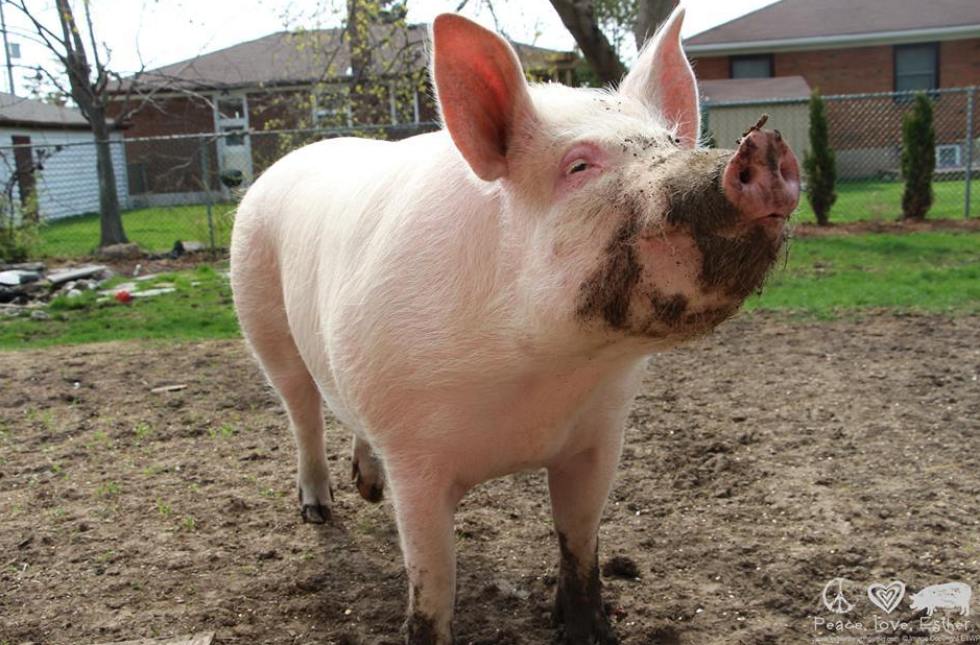 The farm is the family's newest project. Walter and Jenkins, doing business as "The Esther Effect Farm Animal Sanctuary," are currently raising money to buy 43 acres of land.

"We want to provide a home for abused or abandoned commercial farm animals and give them the life we think they really deserve," says Jenkins.

With 40 days to go, they've been given a little under a third of the $400,000 Canadian they're asking on Indiegogo.

Jenkins says that he and Walter have another plan for scaring up the rest of the scratch, if Indiegogo doesn't come through. The couple is determined, he says, to move their family -- the humans, the dogs, the cats and their pig, and any other animals that come their way -- to this property.

There's a house already there, for all them all to live in. Visitors will be welcome to come for hiking, cross-country skiing, and a vegan market -- and to commune with Esther and the other animals, with the hopes that maybe some more lives will also be transformed by the wonder, and the normalcy, of this tremendous pig.

"She is just like every single other pig that lives their entire albeit shit lives on factory farms. All we did was give her a chance to show the world her personality and that amazing smile that people have fallen in love with," says Jenkins. "Without us she would've been a package of bacon or a slab of pork. But she got the chance to live." 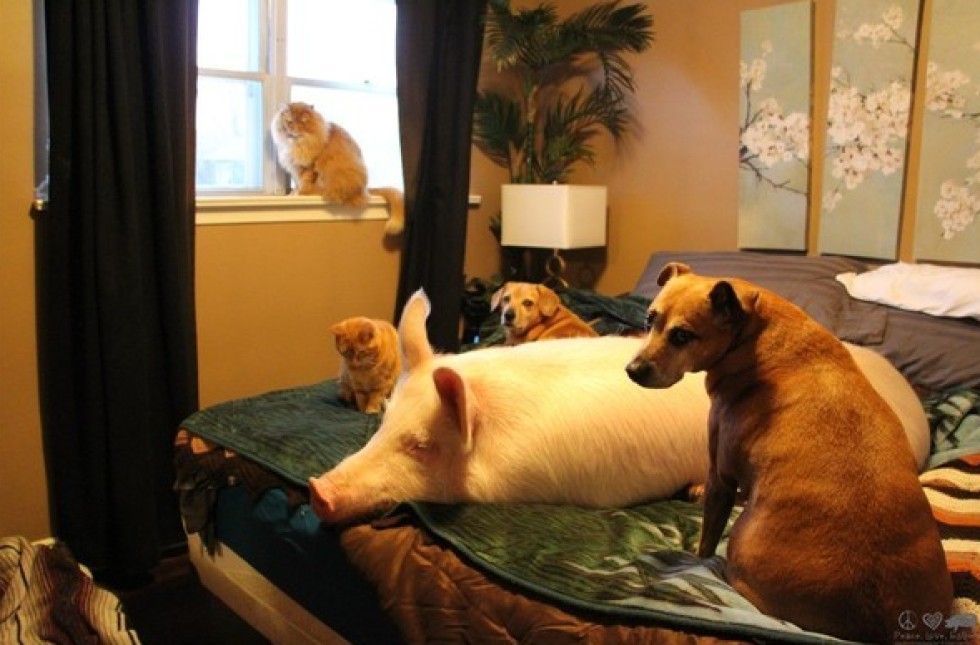 CORRECTION: An earlier version of this piece said that Esther weighs half a ton -- which, as several readers pointed out, is 1,000 pounds instead of Esther's relatively petite 530. This error has been fixed, and our apologies to Esther for so grossly exaggerating her heft! 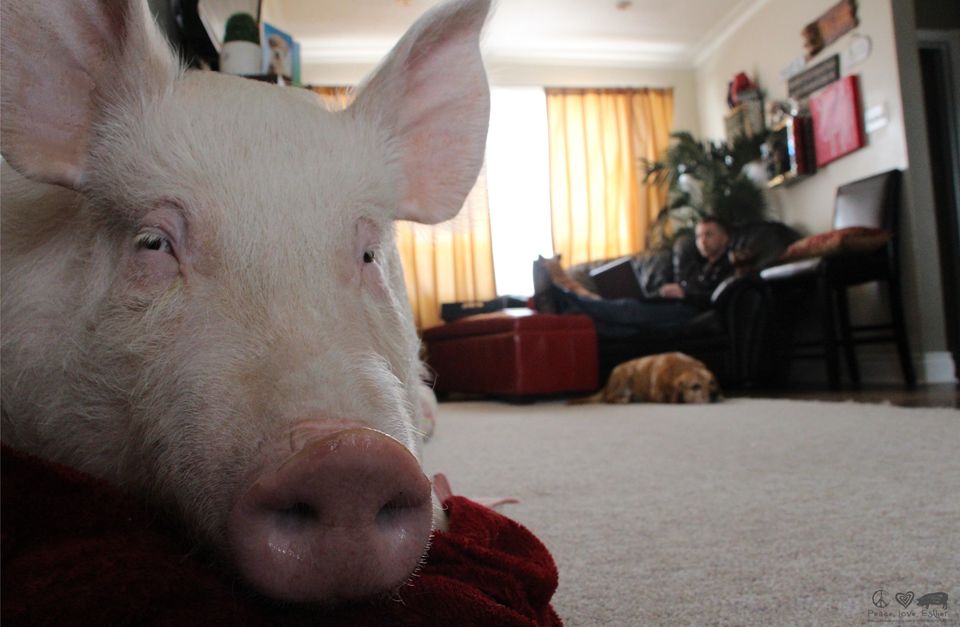