When Billy Harley went out to cut up some wood, he had no idea he "wood" see an E.T.

Harley owns the Uig Hotel on Scotland's Isle of Skye, and was chopping some logs for the fireplace when he noticed one of the stumps looked amazingly like E.T. from Steven Spielberg's classic 1982 film, "E.T.: The Extra-Terrestrial."

"I put the chainsaw through a trunk and there was E.T. staring back at me. I phoned home and my wife brought a camera out to take some pictures,” he said in a release.

The stump has now attracted international attention for the hotel and Harley is hoping to capitalize on the exposure someway, somehow.

“We’re not quite sure what to do now. We could turn E.T. into a coffee table or a bar stool maybe.” Harley said.

The Harleys are also considering naming one of the rooms after the famous alien in hopes it will attract visitors to the aptly-named Isle of Skye hoping to see if anyone from outer space comes to pick up their lost tree stump. 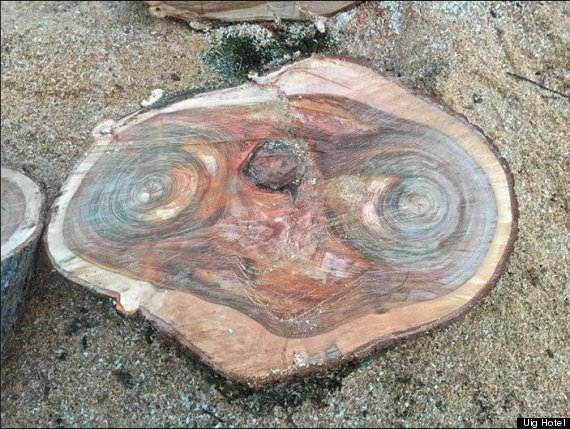 At the risk of alienating people, it should be noted that the stump -- now known as "E. Tree" -- may be more of yet another example of "pareidolia," rather than a sign of life beyond the stars.

Dr. Kang Lee, a psychologist at the University of Toronto, who released a study of face peridolia earlier last year, told HuffPost that "human brains are uniquely wired to recognize faces, so that even when there's only a slight suggestion of facial features the brain automatically interprets it as a face."