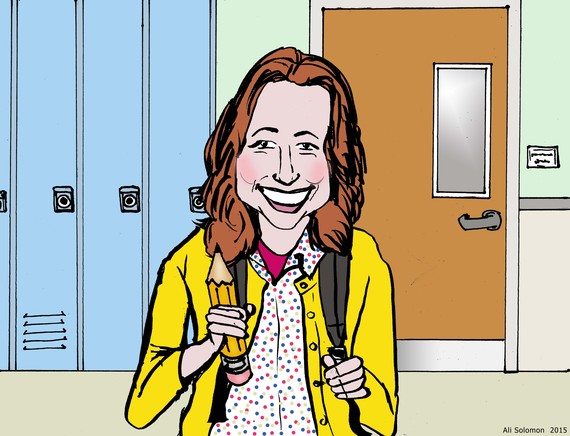 Last Saturday my husband and I binge-watched the Netflix series The Unbreakable Kimmy Schmidt. Like a kid left alone with an unattended plate of brownies, we couldn't keep ourselves from hitting "next" after we consumed the previous one. And like most binges, we continued until we hit a point that made us nauseous and stopped.

That point was "Episode 6: Kimmy Goes to School!" In this episode, the protagonist Kimmy, a former doomsday-cult member who was held captive for 15 years in a bunker, decides to get her GED. Her dreams of an education are shattered by her GED teacher Mr. Lefkovitz, who brings cruel ineptitude to a new level. This teacher's goal, as he outlines to Kimmy, is to be so bad, and have his students fail so miserably, that he is removed from the classroom and placed in a "rubber room," a holding space for incompetent tenured teachers where they can read newspapers, sleep, and play games all day while still collecting their paycheck. This, apparently, is the dream.

My husband and I (both teachers) sighed and turned off the TV. At the risk of sounding humorless, we were disappointed that a show we were wildly enjoying turned to the same tired jokes about teachers being the root of the public school system's downfall.

In a show that both heightens and subverts stereotypes, this seems like a particularly uninspired approach to such a timely, polarizing issue. Ha ha, teachers are lazy and incompetent. Ha ha, you can't fire them because tenure protects them, and unions protect tenure. Ha ha, they are crushing the hopes of aspiring learners.

Kimmy Schmidt tries to soften the blow a bit by making the students adult GED learners, as opposed to, let's say, inner-city at-risk middle schoolers. But the teacher is still the clear villain at a time when teachers are being publicly vilified as greedy, apathetic perpetrators of society's failings. It's one thing to take a hit from the press, or politicians looking to rally around a common scapegoat. But once pop culture jumps on the bandwagon, we don't stand a chance.

This is what my profession has been reduced to. We are the punchline, the perp, the misanthrope. Or perhaps it is not as simple as that; perhaps we are not deemed worthy of a fleshed-out portrayal because no one (not creators, not viewers) relates to us. Obviously we are meant to identify with Kimmy over her terrible teacher, but this is but a microcosm of how this situation plays out every day on a grander, non-fictional level.

As entertainment's depiction of teachers moves from Mr. Chips to Mr. Lefkovitz, it reflects current trends in public opinion regarding this once noble profession. It's hard to make people understand the psychological toll of getting up every day for 30 years to stand and deliver an opus to sometimes dangerous minds. It's even harder to convince non-educators why tenure is essential to the lifespan of a teacher. Or how due process protects us from the whims of ageism, sexism, racism, and nepotism that could (and did) pervade in a system increasingly being run like a business.

Or why hacking away at our pensions, benefits, and job security will push more and more teachers out of the middle class, or out of the profession entirely. Why would our brightest stars gravitate toward a field where they are continuously condemned for their efforts, forced to jump through bureaucratic hoops, or held accountable in increasingly demeaning ways? (Answer: they won't.)

I love my profession passionately. For the past 13 years, I've relished being in a classroom, working with children, and I can't picture myself doing anything else. Teaching is something I work hard at, every single day, and I secretly aspire to be Sidney Poitier in To Sir, With Love, or at least Mr. Feeney from Boy Meets World. However, given the current climate of hostility towards teachers, I'm not sure I would choose to become a teacher today, and I find this fact more tragic than any fictional teacher ruining fictional dreams.

For, like Kimmy Schmidt, in order to survive, we need to be unbreakable.