April is jazz appreciation month and Philadelphia is celebrating in bars, clubs and opera houses all over town. The one-night-only appearance of jazz masters Herbie Hancock and Chick Corea proved to be a stellar highlight. 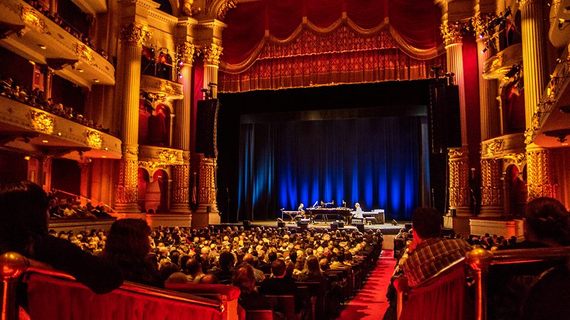 It was obvious from the moment they strolled on the Academy of Music stage without fanfare, like two musicians in their prime, that this crowd knew that they were going to witness a musical night to remember with jazz giants Herbie Hancock and Chick Corea. The pianists wanted to engage this crowd, reunite with musical purpose on the eve of Hancock's 75th birthday before heading to Corea's home turf of Boston for another one nighter.

Together again for the first time in decades, they're on the East Coast leg of a tour and playing to a sold-out crowd. The concert was anything but a remembrance of things past, but a revisitation by those perennial jazz vanguards who are still defining jazz artistry and improvising with sterling technique.

They warmly addressed the crowd, joked about starting out circa 1960, and Corea added: "We can't tell you what we're going to play," as they took their places on either side of two spooning grand pianos. 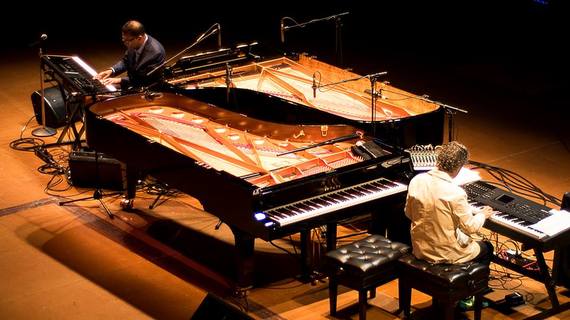 There may have been charts in front of them, but they were barely glanced at as Corea (who threw them over his shoulder at one point) and Hancock explored each other's musical galaxy without getting lost in their own zone. What was being worked out beforehand for the tour could only be hinted at when they were locked in each other's eyes in the moment.

Among the concert's many highlights:

The prologue is a portrait of protean artists with improvisational classical pools by Hancock and Corea that blooming into improvisational jazz expressions by master technicians. Corea takes over with a meditative solo and signature strum on the piano. They are actions and whispers of tango.

Then came Hancock's somber adagio, lacing in the melody of "You'd Be So Easy to Love," in shadowy minor. Minor at any given time can spiral into chromatic space. Like a musical etch to a blues stride piano riff, or a slow boogie-woogie vamp.

"Let's play some[thing] that's painful," Hancock joked, but it was just a spacey electronica with Hancock at his master keyboard and Corea at a synth-board, providing ghost ship effects. Plunks, sonic surges, worn hole effects -- it was space funk orbiting around that "hot minute," as Hancock later joked.

Back to acoustics, the duo launched into a dissonant jam that slid into a dexterous matrix of technique, swooping and surfing around each other like dancing musical mercury fields.

An unrecognizable conservatoire opening by Hancock was handed off to Corea, who picked up with the very distinctive bars of Maiden Voyage, and a lush and spare almost fandango tempo. In a scrambled progression, Hancock touched back to that famous melody in its own infinite voyage it seems. And, on Hancock's Cantaloupe Island, fueled by the lead horns on several recordings, he proved that it's just as dynamic in its piano transcription.

Both pianists were young vanguards with Miles Davis in the '60s, and for their encore, they paid tribute with echoes of Davis' iconic "Sketches of Spain." Then, with Corea leading some surprisingly rich tone vocalese from the audience, he formed the melody of a calypso smooth composition for "Spain."

Corea and Hancock's live recordings from their famed 1978 tours are legendary, and you can only hope that these 2015 tour sessions are also going to be recorded for their many fans.