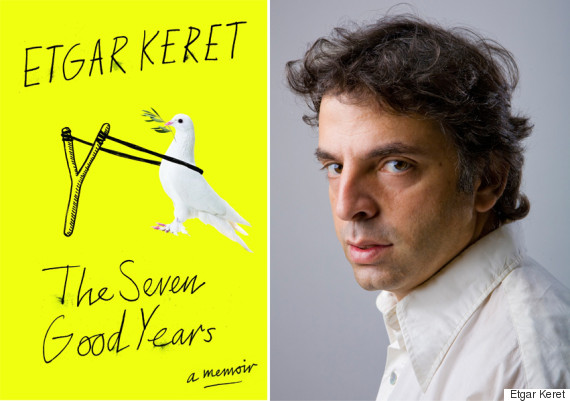 Etgar Keret wrote his first personal essay the day he became a father, which also happened to be the same day as a terrorist attack near the hospital where his wife was giving birth in Israel. As Keret waited in the maternity ward, he was approached by a journalist who asked him about the attack only to be disappointed that the violence wasn't what brought the famous author to the hospital that day. "Too bad you weren't there," the journalist said to him. "A reaction from a writer would've been good for my article."

Thus begins Keret's recently published memoir The Seven Good Years, which chronicles the time between the birth of his son and the death of his father, a Holocaust survivor who recently died of cancer.

Much like his fiction, Keret's new work focuses on seemingly unremarkable, slightly peculiar interactions in contemporary Israel, just with Keret himself at the center of them. A conversation with a cell phone customer service representative gone awry, a casual playground debate about his three-year-old son's future in the army, and a nightmare about former Iranian President Ahmadinejad that throws Keret into an existential crisis about relatives he doesn't feel like visiting are just a few examples of the events that punctuate his seven-year recollection.

But nothing is as simple as it seems in Keret's world, fictional or not. The 47-year-old Tel Aviv-based writer is known for his absurdist, playful perspective and dark humor, which he uses to get his readers to reflect on life's big issues without hitting them over the head with them. If you scratch beneath the surface of the would-be banal instances in his memoir, the Suddenly, A Knock At The Door author says a lot about family, fatherhood and the moral ambiguity of war. According to Keret, it wasn't until he became a parent that he felt the need to write about his personal life. Parenthood, he said, gave him a "sensation of future" and took him out of the "constant present." Before his son was born, if you had asked the writer how old he was, he'd have to stop and calculate to give you an answer.

"I don't know if you'd say I was an enlightened Buddhist or I was fucked up, but this is the way I lived," Keret told The Huffington Post. "When I learned this concept that my father won't live forever and that my son is going to grow up and will reflect on his past, that gave me a different sensation."

Keret chatted with The Huffington Post recently about grieving his father's death, parenting in Israel and what it was like growing up as the child of Holocaust survivors:

On how his father’s death changed him: "There’s a piece in the book where I explain to my son why I protected him when he fell. I said to him, ‘Everybody should have someone around to watch their back -- the world is too difficult.’ My son said, ‘Now that your father is dead, who’s watching your back?’ My father was always this go-to guy. I didn’t need to go to him, but I knew that I could. I really miss that. Suddenly I find myself literally in my father’s shoes having to deal with the outside world. My father did my taxes until four months before he died. He would say to me, ‘If you do it wrong, they can put you in jail, so let me do it.’ Even the concept of doing something as trivial as my taxes makes me feel like an orphan."

How growing up as the child of Holocaust survivors shaped his identity: "I grew up in a family with a mother who was orphaned at a very young age, and she would say to us, ‘Every week I’m a parent, you look at your own children and think about how your parents raised you. If you had a good childhood, then you imitate them. If it was a bad one, then you do the opposite. I have no point of reference.’ Going through the Holocaust as children, they never had that natural growing up process in which they rebelled against their parents. My mother was the sole survivor of her family, so she created the world inside her own head.

"Going through the Holocaust, the thing my parents wanted the most was to have a family. I was born in six months by cesarean operation with the umbilical cord tied around my neck weighing 900 grams and having jaundice. My mother said that the first memory she had of me was two doctors betting how long it was going to take before I died. So when I grew up as a kid, when I’d say to my parents, ‘What do you want me to do?’ they’d say to me, ‘You’re alive, that’s enough. We survived the Holocaust and had a child. You’re alive; you’re great. We don’t need anything more.’"

On reconnecting with Poland, despite the tragedies that befell his parents there during the Holocaust: "When my mother first read me Polish, she said, ‘You’re not an Israeli writer -- you’re a Polish writer in exile.’ Although I never spoke Polish, I grew up with parents for whom everything that would make them laugh or cry was the stuff that would make a Polish person laugh or cry. So I think that some of the sensibility is in me.

"I think it’s a fascinating country, and I really like the people there. The history of the Holocaust is horrible and there were many anti-semitic acts and many Polish collaborators. But the same could be said about Holland -- the rate of people who joined the SS was extremely high there. The Aryans looked down on the Eastern Europeans, so while there were many Poles who were anti-semitic and acted against Jews, the entire nation was victimized by the Germans. I’m just saying it’s a very complex story and, like all complex stories, we like to reduce it. When we talk about Poland as a country where so many Jews died, we should also talk about Poland as a country where so many Jews lived. The reason there were so many Jews in Poland was because it was a country that accepted them."

On the “good-old” anti-semitism he encounters in Europe: "I’ve just been to Poland with my mother. Where we were staying, right on the wall, there was a photo that said, ‘A Jew in the corridor, money in the pocket.’ When I talked to somebody there, they said, ‘It’s not against Jews -- it’s for Jews. It’s saying that you’re good with money!’ It’s this idea that Jews are some kind of leprechaun.

"The idea of Jews being seen as mystical creatures, it’s something I can understand rationally because unlike other immigrant groups, which you can recognize as ‘others,’ if there are Asian or African Jews, they look the same but they’re not the same. So there’s something about this trickiness -- it’s like Jews invented superheroes. All of the Stan Lee characters, like Spider-Man, were invented by a Jew because the idea of a secret identity is very Jewish. You go into a phone booth, you put a yarmulke on and you’re a Jew. You put it in your pocket, and you look like everybody else. There is something about this kind of mysticism that, when I travel in Europe and Eastern Europe, still echoes."

How parenting in Israel is unique: "I think that being a parent is universally difficult, but I think that issues that are very abstract all over the world become very specific in Israel. Let’s say the greatest fear every parent has is that one day your child is going to be in a position where you have to make a kind of damned-if-you-do-damned-if-you-don’t decision and, whatever you’re going to do, you’ll have to pay the consequences. For an American parent, you say, maybe he’ll get someone pregnant or he’ll use crystal meth and the police will come. In Israel, you don’t have to use any imagination -- he’s going to turn 18 and you have to say: Will he go to the army? What will he do in the army? This is a given.

"The other thing is that it’s very difficult to raise a child when you’re forced to explain to him all kinds of moral and oxymoronic issues that you can’t even explain to yourself. When you raise a kid in the U.S., there are many problems in Somalia, but you know what? I’m a lazy parent, so I don’t want to talk about it -- we’ll talk about 'Sesame Street' tonight. Becoming a parent put me in a position where it’s much more difficult to ignore things that I enjoyed ignoring for many, many years before my son was born."

Why it’s easier for him to communicate with children: "I think talking with a child and understanding a child is much easier than understanding a grown-up, simply for the fact that a grown-up might be carrying 20 or 50 years of baggage of being fucked up by life in such a distinct and specific way that there’s no way you can understand what’s in his mind. With a child, there’s something more primal. His life has only been fucked up by the environment for three or four years, so it’s easier to communicate. In many ways, a kid is an adult with less life experience who isn’t very good at math and language."

On whether or not he plans to continue to write about his personal life: "I think the function of writing nonfiction in my life is totally different than the function of writing fiction. Now that I've finished this book, if you ask me, 'Will you write another nonfiction book?' I'll say, 'No, my father died and I needed that to say goodbye to him and acknowledge what a wonderful family I'm a part of.' Now I go back to do what's more fun for me."

How To Lose A Father And Become One, In The Words Of Etgar Keret
10 Amazing Nonfiction Books

1 / 10
'Thirteen Days in September: Carter, Begin, and Sadat at Camp David' by Lawrence Wright
"A unique moment in history superbly captured. Yet another triumph for Wright." A Pulitzer Prize-winning author reconstructs and reflects on "one of the great diplomatic triumphs of the twentieth century" and the men who made it happen. <a href="https://www.kirkusreviews.com/book-reviews/lawrence-wright/thirteen-days-in-september/" target="_blank">Read full book review here.</a>