Back in the mid '90s, when I was in college, "Reality Bites" was a really hard movie to avoid. It was the Movie That Defined Our Generation. Even now, 18 years later, I'm not sure anything has come along to better define Generation X than "Reality Bites." Which is a bit depressing. Ethan Hawke, as the star of "Reality Bites," was a major part of the Generation X movement that started with so much momentum -- Nirvana! Pearl Jam! Wynona Rider! -- but eventually led to ... well, he's not exactly sure.

Hawke's latest movie "Sinister," opening this Friday, is that rare horror movie that's (a) very well made and acted and (b) absolutely terrifying. Hawke stars as a true-crime author who moves with his wife and kids into a house where a family has recently been murdered; his goal is to solve the mystery of how they were killed, and you can imagine how well that works out for him. Ahead, Hawke explains why he decided to make his first horror film now; warns that the next film in the "Before Sunrise" trilogy, "Before Midnight," could well be the last of the series; shares his memories of directing the music video for Lisa Loeb's "Stay"; and struggles to understand how "Snow Falling on Cedars" became a punchline in "Horrible Bosses."

This movie is really disturbing.
[Laughs.] It is. It's definitely unnerving. It's trying to be -- and it succeeds.

Especially the murder footage that was filmed in super 8. I mean, I know it's just a movie and it's not real, but it looks very real.
Yeah, there's something kind of incendiary about it. You kind of feel like, "Oh, I shouldn't be watching this!" And that's what I love about the movie, because, in a way, by watching it, it's how this demon comes into [Hawke's character's] life. Which is kind of a subversive, weird thing for the movie to do -- that watching movies is going to poison your soul.

It felt like an Internet video that someone sends to you in which something bad happens to someone. Like, "I don't want to watch that."
It's something I never dealt with as a kid, but I still have people email me links to something that I never wanted to see. If you make a comedy, the idea is to make people laugh. If people are going to see a horror movie, they want to be scared. So, you're basically building a roller coaster, you know?

This is your first horror movie, right?
Yeah.

Why did you want to do one now?
Well, mostly, because when I was younger, I ran a theater company with this guy, Jason Blum. And he loved horror movies and he went on to create his own little subgenre with "Paranormal Activity." And he kept trying to talk to me about how I should love this whole genre. And I told him: I've never had a script with a really great character and a real filmmaker attached to it that I'd be interested in. So, he brought me into it. That was my hesitation about this genre: Most genres need good acting to be successful. And the horror genre sometimes doesn't, you know?

It feels like the trend lately is to make a lot of money the first weekend, quality movie or not, then the movie quickly disappears. I think there's a feeling at the studio that it doesn't have to be that good; it will make money regardless.
Yeah, exactly. "We'll make $50 million off the poster." And they make these forgettable movies. And I define a forgettable movie as one that doesn't have characters in it that you relate to. And, ultimately, what's separates "Carrie" and "The Shining" and "Rosemary's Baby" and "Alien" -- what separates those movies from the rest of them is that they have really good, strong central performances. The truth is, I've been acting since I was 13 and I'm always trying to make it fresh and new for myself, and I have to try to work inside different kinds of movies to let myself give a different kind of performance. If I just keep making "Before Sunrise," it would be really fun, but I need to push myself to do other things.

It's interesting that the group of movies that you mention all came out, except one, in the late '70s and early '80s.
There's something special about that time period for cinema in general. I mean, that's what I think. You know, right now, it feels very big business. But, I mentioned, who: Stanley Kubrick, Brian De Palma, Roman Polanski and Ridley Scott. Those are the directors who directed those movies. You know, that was a time period where the crossover between artistic success and commercial success -- they were just more integrated than it seems like right now. So, that's the period that I love.

You mentioned that it would be fun, but you don't want to just keep making "Before Sunrise." You know, people love those movies.
Well, I love those movies, too. It's the best film experience of my life, those movies. And I just finished the third one, so obviously those are very important to me.

Couldn't those just keep going and coinciding with whatever age you two happen to be at that time?
You know, I don't know. When we finished the second one, it definitely felt unfinished. It's just a question whether or not these characters continue to have something to say. This third one, they start to be as much about time as they are about people, you know? The last one we did was set in Greece and I know why -- you see Julie and I in this place that has 3,000 years of history around every corner. So you just feel the omnipresent feeling of time. Even the first one, it's about that moment of first meeting someone -- time is so precious.

I feel that there's a lot of anticipation for the third one.
To be honest, the way I feel right now, having just finished it, I feel both the other two were just leading up to this one. I really do. That's why I think we may not make another -- it comes to fruition in this one.

I was in college when "Reality Bites" came out, so I am part of the generation it's portraying. I think "Reality Bites" still defines Generation X more than anything else, and I don't know if that's a good thing. I'm not sure this generation has done anything to surpass that movie.
You know, that's the good news and the bad news. I know exactly what you mean. Did you see the "Pearl Jam 20" documentary?

Yes.
It's fascinating to me that Pearl Jam is 20 years old. Like, when Pearl Jam and Nirvana, "Reality Bites" and "Slacker" were happening, it did feel like it was building to something. What was it building to? But then I sometimes wonder, "Does every generation feel that way?" You know? The Baby Boomers, what are they about? What does each wave ... ? You know, it's kind of an existential thought.

Maybe it has to do with politics. It was a big deal when Clinton became the first Baby Boomer president. I heard it mentioned the other day that Paul Ryan was the first Generation X candidate for president or vice president and, well, that wasn't what I was expecting.
That is so profoundly disappointing.

So, when I watch "Reality Bites" today, I think, What happened?
I know. For me, I guess it shows how little I care about politics, but I think about the first people of our generation to do great art. I see Michael Chabon write a great book; when I see Philip Seymour Hoffman do "Death of a Salesman" last year -- I see people of my generation being fully realized in their work, and I find that really kind of exciting. But politics? I don't know. Paul Ryan is certainly not my man.

Speaking of "Reality Bites," at that time did you have any idea you were directing one of the most popular music videos of all time with Lisa Loeb's "Stay"?
It's funny that you bring that up. I mean, absolutely not; of course not. I do take a secret pride. Do you know that's the only No. 1 song in the history of rock and roll for an unsigned artist?

I did not know that. That's interesting.
Isn't it cool? So, Lisa was a member of my theater company and I sent that song to Ben [Stiller] and he put it in. I mean, everybody else gets the credit. But it was a funny, funny music video.

In college, more than once that song was sent to me by a girl I liked with a note containing some variation of "This is how I feel."
[Laughs.] I know. I know.

Have you seen "Horrible Bosses"?
I have not. Why do you ask that?

Because "Snow Falling on Cedars" plays a role in that movie.
Really? Why?

Jamie Foxx plays an ex-con who we think served time for a terrible crime, but it turns out that he served 10 years in prison for bootlegging "Snow Falling on Cedars."
[Laughing.] That's pretty funny. It's such an innocuous movie to bootleg! That's what makes it so funny.

It's hard to think of someone as a criminal who bootlegged that movie.
I mean, it's the gentlest film of all time! I mean, it makes a feather look violent.

PHOTO GALLERY
Horror Movies Based on True Stories
Download
Calling all HuffPost superfans!
Sign up for membership to become a founding member and help shape HuffPost's next chapter
Join HuffPost 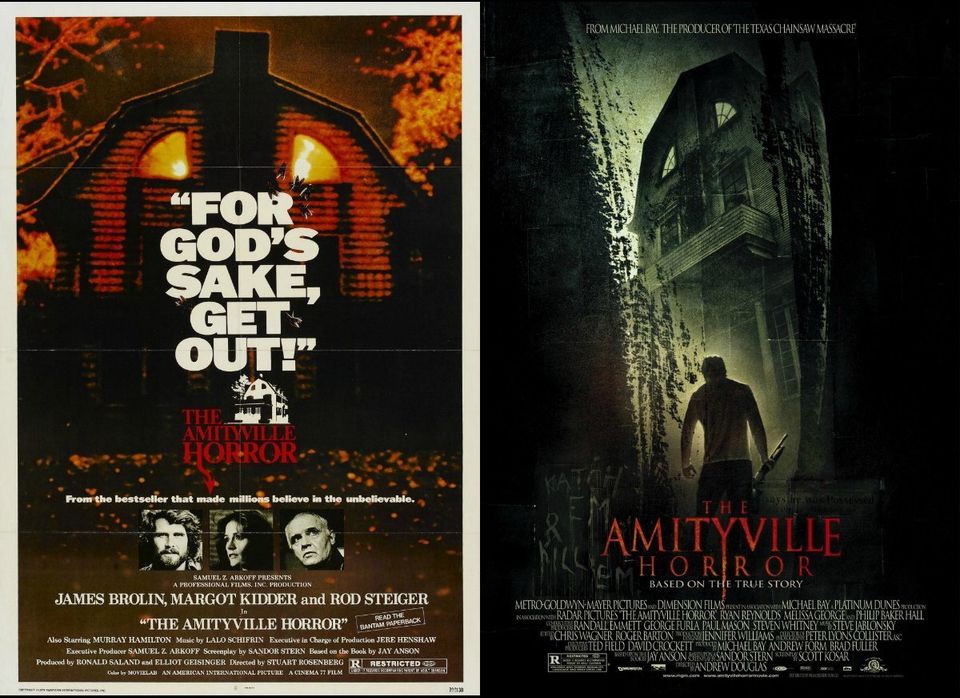 1 / 8
'The Amityville Horror' and Remake (1979 | 2005)
<strong>The Story:</strong> Rondald DeFeo bizarrely murders his whole family; a year later George and Kathy Lutz move into the DeFeo house and experience paranormal terrors. <strong>The Facts:</strong> The real priest who claimed to be assaulted by a paranormal presence has flip-flopped over the years, on whether he actually stepped foot in the house or not. Local Native American leaders dismissed that the house was built on a burial ground. When the Lutzs sued several authors and publications for misappropriation of their story, the judge threw their case out, claiming they were being coerced by Ronald DeFeo's defense lawyer, William Weber, into fabricating the whole thing. Weber later told <em>People Magazine</em> that it indeed was a hoax. No future tenants have ever reported any strange occurrences.